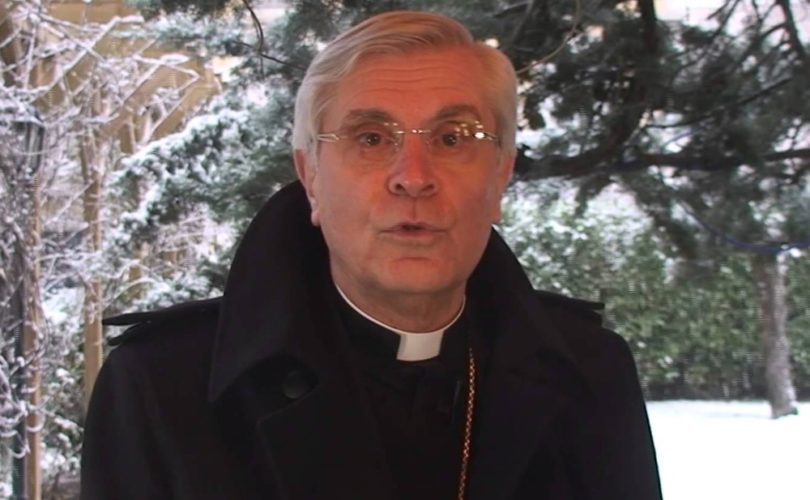 A well-known Catholic bishop who heads a small diocese in France is under fire after criticizing the country’s massive pro-marriage demonstrations for, he claims, perpetrating “violence against homosexuals.”

Bishop Jean-Michel di Falco of the diocese of Gap and Embrun made a media statement in the Sunday edition of the Dauphiné libéré, a local newspaper, distancing himself from the “Manif pour tous” rallies against same-sex “marriage” last year. His accusations caused astonishment and hurt among those who fought the same-sex “marriage” law, and rally organizers followed with a response in the same paper.

“While in the beginning the demonstrations were mostly good-natured, they were hijacked as time went on,” the bishop said. “As well, I think there should have been no children joining these demonstrations. It was not their place. Among these children, who were 7, 8 or 10 years old, some of them may discover when they are 18 or 19 that they are homosexual. To whom will they be able to turn to speak of what they have discovered in themselves when they remember that their parents took them to demonstrations where people expressed aggressiveness and violence against homosexuals?”

Albéric Dumont, general coordinator of the “Manif pour tous,” responded officially in an op-ed that the Dauphiné published last Sunday, underscoring the many reactions, for and against, some of them vehement, to the bishop’s condemnation.

“You were not present at the demonstrations and you were probably ill-informed: the truth is the exact opposite,” he wrote. “From the start and up to now, the ‘Manif pour tous’ expresses itself with the greatest respect towards homosexual persons, without the least aggressiveness nor verbal or physical violence. Our spokespeople – among whom are homosexual persons – never used disproportioned or hurtful expressions, quite the contrary. The ‘Manif pour tous’ goodwill towards homosexual persons even constitutes a major trait of its establishment and identity, and this has never varied.”

He goes on to say about the presence of children at the demonstrations.

“In a way, you have taken the risk of hurting – involuntarily, no doubt – those families whom you are accusing of anti-educational acts towards the children who joined the demonstrations with them,” Dumont wrote.

“Deciding what is good for their children, in the educational field, is a prerogative that belongs firstly to the parents. It is normal that a proposed law that disrupts the elementary points of reference of the family should trigger a family reaction. The demonstrations were family affairs, and that is precisely what contributed to making them respectful, as all were conscious of their responsibility as educators. Those children who were present received the example of responsible and non-violent commitment, despite the provocations and the contempt shown by the public authorities.”

“I think we should congratulate these parents for having passed on to their children such a culture of commitment under the sign of goodwill,” he concluded.

Dumont invited Bishop Di Falco to join the “Manif pour tous’” event coming up on October 5, when French people are expected to respond massively to discreet moves towards the legalization of artificial procreation for same-sex couples and surrogate motherhood, as well as voicing their opposition to the pervasiveness of gender ideology, which under France’s new education minister, Najat Vallaud-Belkacem, will make its presence felt even more heavily in schools and public institutions.

The Dauphiné libéré notes that Bishop Di Falco was not willing to comment on Dumont’s op-ed.

What is clear is that the bishop was more at ease with the public demonstrations in the beginning under the leadership of Frigide Barjot. A liberal Catholic who launched the movement in November 2012, together with numerous other groups, Barjot’s growing public insistence on the “legitimacy” of “homosexual love” and the necessity of offering homosexual couples a better type of civil union led to her exclusion by May 2013.

Gap and Embrun is a small diocese but the bishop is well known for having been the official spokesman of the French bishop’s conference for a number of years. As a media figure, he is famous even beyond the Catholic Church’s reach as the producer of several song discs recorded by three young priests of his diocese, “les Prêtres”, which reached the top of the charts a few years ago.