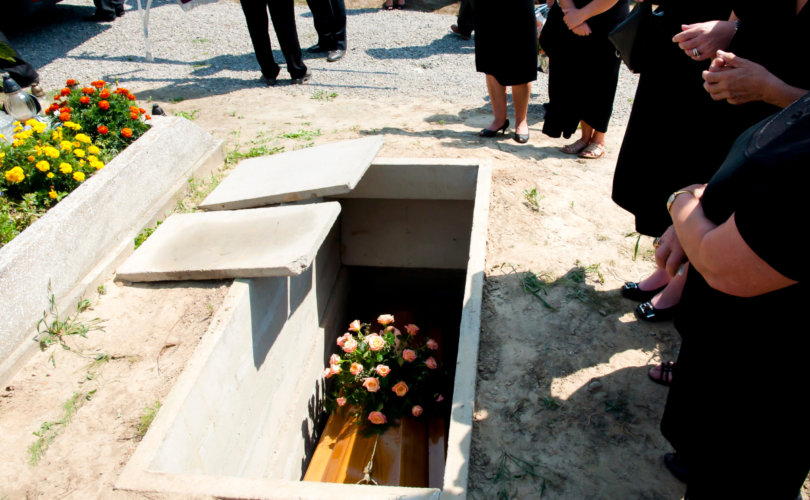 March 30, 2020 (LifeSiteNews) – In the northern French town of Béthune, not far from Calais, funerals in these times of COVID-19 are still worthy occasions. While victims of respiratory complications from the Chinese coronavirus are being hastily buried or, more often, cremated without family members getting a proper chance to see the face of their loved ones one more time and pay their last respects, the brotherhood of the “Charitables” of Béthune is continuing to do what it has done for more than 800 years: voluntarily carrying the deceased to their last resting place as an act of piety and charity.

To date, France’s death toll officially attributed to the Chinese coronavirus is 3,042.

Under strict confinement rules that were tightened on March 28, no more than 20 persons are allowed to join funeral Masses and to accompany their loved one to the cemetery, putting heavy stress on those who are obliged to pick and choose between family members and friends who usually come from far and near on such occasions in France. Traveling across the country has also become very difficult.

When there is a suspicion or certainty that the deceased was infected with the coronavirus, the coffin is immediately closed because of the “sanitary risk.” There is no religious ceremony at the graveyard. Social media in France hosts many sad messages from sons, daughters, grandchildren, and friends who are deeply frustrated at not having been able to assist at the funeral of a loved one and who know that the event was bleak and soulless because of the circumstances.

The “Charitables” of Béthune, on the other hand, have been able to keep up their tradition of burying the dead with honor and respect whatever their social condition and the reason of death. Wearing their characteristic black cloaks, white gloves and black cocked hats, they solemnly process through the streets of the town – no more than five at a time because of present restrictions, so as not to prevent families to attend in as large numbers as they can – between the place where the funeral ceremony took place and one of the cemeteries of the town.

Once there, they repeat the same gestures they have made for centuries, lowering coffins into the graves with great solemnity. They then observe a minute of silence before proclaiming: “Requiescat in pace” – “May he rest in peace.” Before leaving the cemetery, they join in a circle in front of its gates and, as tradition will have it, assess whether everything went according to the rules. The “Charitable” who made a mistake during the ceremony, such as taking off his cocked hat at the wrong moment, will pay a symbolic fine.

The French media published several admiring reports on the consoling presence of the “Charitables” of Béthune at a time when funerals have become even sadder occasions than usual, stressing that their commitment is bringing dignity and humanity to interment ceremonies.

One of the latest burials led by the “Charitables” was that of a poor, homeless man of 34 who had neither family nor friends to accompany him to his grave.

Whether the deceased is rich or poor, old or young, religious or not, Catholic, Jewish, Protestant or Muslim … the service is completely free. In Béthune, undertakers only provide the coffin and prepare the grave. The “Charitables” offer the full accompaniment of the deceased at no cost, and are in particular expected to assist at the funeral Mass if there is one.

The “Charitables” of Béthune, or Brotherhood of St. Eloi, were founded in 1188 at a time when Béthune, having gone through various earthquakes, famines, fires and other disasters during the 11the and 12th centuries was hit by a deadly plague favored by the nearby marshes and the proliferation of mosquitoes, rats and other unsavory animals. The pestilence was such that bodies of men and animals strewed the narrow streets, and few were prepared to give their fellow men a decent funeral.

Amid the pestilence and the stench of death, the people of Béthune invaded the churches and sanctuaries of their town, beseeching God, through the intercession of St. Eloi (the holy bishop St. Elegius, a remarkably honest goldsmith become cleric in seventh century France is much revered in this country), to protect them.

On the feast of St. Matthew on September 21, 1188, two local smiths, Germon from nearby Beuvry and Gautier from Béthune, met at a spring marking the frontier between the two towns and, speaking of the dire straits their people were in, realized that both had separately had a dream in which St. Eloi had appeared to them, asking them to found a “Charity” or brotherhood.

A monk from a local Abbey having advised them, the two men honored St. Eloi’s request. Their brotherhood would give bread to the poor, care to the sick, consolation to the dying and a worthy burial to the dead: something they have now been doing for 832 years without interruption.

Many townsmen of Beuvry and Béthune joined the founders, and thanks to their actions, the pestilence receded and finally disappeared. The “Charitables” continued to exist, however, receiving land to build a chapel dedicated to St. Eloi. They have since then remained faithful to the rules of their founders, which were first given a written form in their foundation charter dated October 26, 1317.

The Brotherhood of the “Charitables” was dissolved in 1797 under the French Revolution, but its members continued discreetly to minister to the needs of the deceased until 1802, at which time they were officially allowed once again to act according to their traditions and bury the dead of Béthune.

Since the middle of the 19th century, they have become a lay organization because of differences with the local bishop of Arras, who wanted them to submit to the tutelage of the Church. Their relations with the Catholic authorities have, however, been excellent since then.

They continue to come to the aid of the needy, thanks to public donations, but their main activity remains the free service of burials. Comprising only men, the “Charitables” come from all walks of life and are expected to be of good moral character.

Their numbers decreased dramatically during the 20th century: in 1973, there were only 10 left. Nowadays, there are more than 50, often descendants of former “Charitables.”

The Brotherhood of St. Eloi believes it has the special protection of its patron saint. Since 1188, no active member of the confraternity has ever been touched by any contagious or epidemic illness.