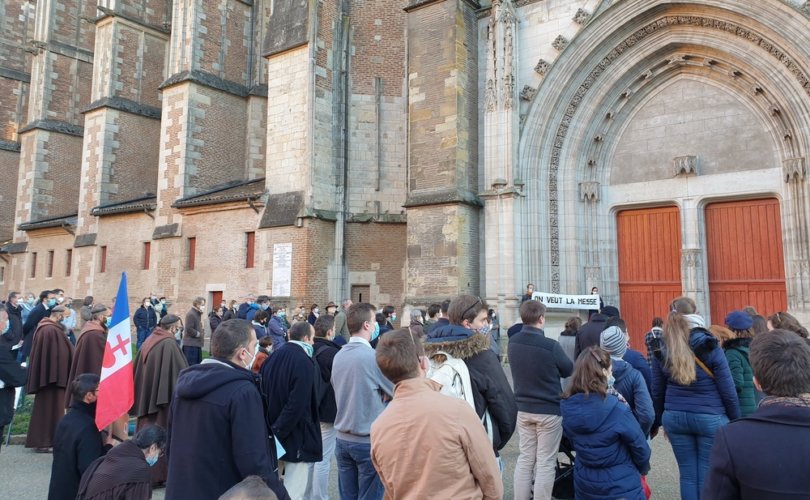 November 24, 2020 (LifeSiteNews) – The third Sunday without public Masses because of the current COVID-19 lockdown in France saw an increase in often prayerful demonstrations in towns and cities all over the country. Over 70 rallies were held, with many traditionalist Catholics but also “Novus Ordo” faithful, in an unaccustomed spirit of unity. Two emergency lawsuits had confirmed that it is illegal for the administrative authorities to ban a demonstration because of possible public prayers – the motive that was invoked a week earlier to condemn certain rallies and prohibit others, such as in Paris in front of Saint-Sulpice.

While judiciary twists and turns prevented the lawsuits from being successful in allowing the organization of an open-air Mass as had been planned in Clermont-Ferrand, in the center of France, they did allow hundreds of faithful to sing hymns and pray at Saint-Sulpice in Paris. They also underscored the abuse of power on the part of French authorities who had arbitrarily threatened faithful who would sing or pray while asking for the restoration of the fundamental liberty of public worship with fines and bans of demonstrations.

Interior Minister Gérald Darmanin proclaimed a week ago: “I don’t desire to send police forces to issue tickets to believers who are in front of a church, but obviously if this is a repetitive act, and it is manifestly contrary to the laws of the Republic, I will do so.”

The threats did not prevent thousands of Catholics all over the country from praying publicly, either last week or this Sunday. The association “Civitas” hoped to organize open-air prayers and even a Mass in Clermont-Ferrand, according to some sources, and declared it officially at the local “prefecture” (the official representative of central power charged in particular with law-enforcement and the protection of public order). When the “Préfet” issued a ban on the event Civitas used an emergency “liberty” procedure at the local administrative court and obtained victory.

The ban was motivated by the fact that the rally was not a protest demonstration but a “religious event.” Such a distinction, argued Civitas, is not founded in French law, either in the Code of Security of the Interior or in administrative case-law.

The administrative court agreed, judging: “Thus, it does not result from the provisions in force, in particular from the aforementioned decree of October 29, 2020, that a demonstration on the streets may be prohibited in principle, for the sole reason that it could be regarded, by its purpose or form, as the outward manifestation of religious worship.” It added that the ban on the event constituted “a serious and manifestly illegal infringement of the freedom of demonstration.” The judge made clear that both freedom of worship and freedom to demonstrate are fundamental liberties and that public authorities have no right to prohibit a public demonstration because of its religious content.

The decision was handed down on Saturday morning, but was finally not applied. In the afternoon of that day, the “Préfet” once more banned the prayer rally, not for religious motives but because of “sanitary” reasons, despite the fact that confinement rules allow for protest demonstrations of which there are many at present in France, be it on the part of Catholics, small shop-owners who risk bankruptcy because of the confinement regulations or those who oppose the “global security” laws that are presently being adopted by Parliament.

Once again, Civitas lodged an emergency procedure on Saturday evening but this time it was rejected by the administrative court, which validated the Prefect’s second ban. The prayer rally did not take place.

Civitas has announced that it will organize a larger number of prayer events next week and that it will take the affair to the Council of State if necessary.

On the other hand, in Paris, the student group that first launched a major petition against the banning of public Masses, “Pour la Messe,” seized the administrative tribunal after the Paris rally in front of Saint-Sulpice was threatened with a ban for the second time.

The “prefect of police” of Paris, Didier Lallemant, authorized the rally on the condition that there would be “no street prayers on the public roads.” “If these prescriptions are not complied with, participants will be fined and dispersed,” he made clear.

The organizer, Jean-Benoît Harel, took this letter to the administrative court complaining of the restriction of the demonstrators’ liberty. In an emergency decision, the judge decided that the “Préfet” had not demonstrated that the restriction was justified by the necessity to avoid “disturbing the public order.” “He must be regarded as prohibiting in principle a manifestation which, by its purpose or form, would be an outward manifestation of religious worship. Consequently, its decision, in so far as it makes the holding of a demonstration conditional on the prohibition of street prayers, is a serious and manifestly unlawful infringement of the freedom of demonstration,” according to the judge, who formally lifted the restriction.

On Sunday, hundreds joined the rally in front of Saint-Sulpice. Many bore candles, kneeled and sang, as can be seen in this video.

— Article continues below Petition —
PETITION: Stand with Poland for defending the unborn and churches against leftist aggression!
Show Petition Text
3542 have signed the petition.
Let's get to 4000!
Thank you for signing this petition!
Add your signature:
Show Petition Text

Many other rallies in France included prayers, rosaries and hymns. While some bishops once again distanced themselves from the protests of the faithful, for the second time, Bishop Aillet joined the faithful who prayed in front of Bayonne Cathedral. Three other bishops also joined their flocks, such as Bishop Christory in Chartres.

In Saint-Maur des Fossés, a suburb of Paris, Jérôme Triomphe – the lawyer of the AGRIF, a Christian legal defense group, and of the family of France’s Terri Schiavo, Vincent Lambert – made a striking speech recalling that “the Mass is the treasure of the Church,” because it is the “very supplication of Christ to the Father, that He may forgive sinful and repentant humanity.” “That is why we cannot be saved without it. That is why we cannot do without it,” he proclaimed.

He also quoted the general in chief of the Catholic and Royal Army of the Vendée that fought the anti-Catholic French revolutionaries during the Terror period that followed the 1789 Revolution, François-Athanase de Charette. Charette’s words resonate profoundly with present day fears and hopes:

For us our country is our villages, our altars, our graves, all that our fathers loved before us. Our country is our Faith, our land, our King. But what is their country? Do you understand? Do you? They have it in their brains; we have it under our feet. It is as old as the devil, the world they call new and would establish in the absence of God. They tell us we are the slaves of ancient superstitions; how ridiculous! But in the face of these demons who are reborn century after century, we are youth, gentlemen! We are the youth of God, the youth of faithfulness! And this youth will preserve, for itself and for its posterity, true humanity, and liberty of the soul…

This spirit of freedom is blowing with increasing force in France. It is too early to tell of the priests who are circumnavigating the rules, finding ways to say Mass publicly without risking fines – up to three Masses every Sunday – and the ever larger numbers of faithful who are managing to fulfill their Sunday obligation despite the absurdity of the lockdown rules.

As COVID-19 contaminations and cases of illness continue to fall – but they were already falling before the lockdown was imposed, raising ever more doubts as to the usefulness of such infringement on public liberties – more and more skeptics are asking questions about a nightmarish situation where mental health is being shattered, small businesses are being destroyed and restaurants and bars see no end to the tunnel of debt and inactivity into which the public authorities have thrown them. The Catholic reaction is also a sign of hope, even if it is that of a minority: but a “creative minority,” in the words of Pope Benedict.