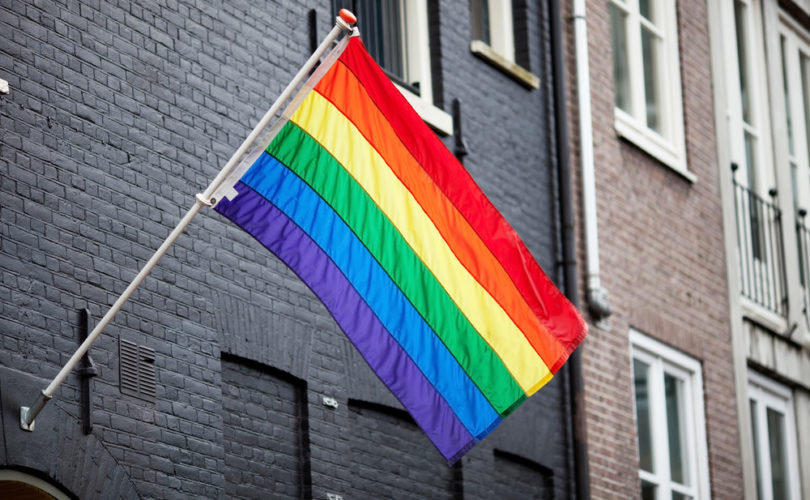 July 3, 2020 (LifeSiteNews) – A French Court of Appeal has found 12 college students who joined a spontaneous action against an “LGBT rights” stand in La Roche-sur-Yon, the administrative capital of the Vendée in the west of France, “not guilty” of homophobic insults and obstruction to a legal public demonstration.

The event had taken place last year on May 18, leading to mainstream media outrage against the young adults. They were immediately sanctioned by the Catholic University which most of them attended: ICES, “Institut catholique d’études supérieures de la Vendée.”

Their acquittal by the Court of Appeal of Poitiers is a slap in the face of the ICES, whose president, Eric de Labarre, had presented their student rumpus as a “grave incident,” and announced that disciplinary action would be taken. This was despite the fact that the “attack” took place after the end of the academic year – the students had just received their exam results – and outside the college campus that was closed at the time. In fact, not all the youngsters who joined were students at the ICES.

On May 20, 2019, de Labarre said: “The ICES condemns all forms of violence used to promote any convictions whatsoever. … Their attitude is detrimental to the reputation of the ICES, and as such they will not only be accountable before the courts, since a complaint has been lodged, but also before the ICES.” University authorities went so far as to disclose the identity of students who had participated in the incident to the police.

LGBT activists were calling for sanctions and expulsions for the students and the ICES adopted their vocabulary, speaking of their “anti-homophobia stand.”

At no time did the Catholic university’s hierarchy recall that if respect for all persons is a necessity, the upholding of Catholic teaching is also. While recognizing that their methods may have been ill-advised, several of the young anti-LGBT demonstrators insisted that they had been angered to see public promotion of moral disorder.

The public prosecutor of the Vendée, in a statement to the media, said at the time that there was “no link” between the incidents and the fact that some of the young men happen to be studying at the ICES.

Now a civil court of penal justice has confirmed that their actions were not serious and did not deserve to be called homophobic or hateful. Of the 12 young people who were judged in Poitiers, only three received light sanctions: modest fines and a number of hours of community work because they had hidden their faces with masks in the public square and stolen a rainbow flag. These three young men were not studying at the ICES. The court also decided that there will be no trace of the judgement in their criminal record.

The incident in itself may be considered to have shown a lack of discretion on the part of the high-spirited young adults who, for the most part with heads and faces uncovered, walked through the LGBT exhibition charting “Homofolie, ça suffit” (“We’ve had enough of homofolly”). Videos posted on the Internet showed them toppling an iron fence, bursting a few balloons with their cigarettes and taking a rainbow flag with them. LGBT activists ran after them, filming the group with their smartphones. Some pointed remarks were exchanged but there was no evidence of violence.

One week later, the local press reported that two septuagenarians present in the LGBT stand at the time claimed that they had been “knocked over” by one youth and given medical certificates of “temporary incapacity for work” of up to 10 days.

By that time, the incident had blown up into a major national news story, with many mainstream reports announcing that the LGBT stand had been “ransacked,” even though three female LGBT activists present at the scene had acknowledged on television that the damage had been minimal and no one had been harmed.

The young men were soon picked up by the police, who made clear that they were acting on orders. According to one of them speaking with LifeSite a police officer told them at the time that they had been asked to give priority to the affair over investigations that were being made in a rape case.

At the first hearing at the tribunal of La Roche-sur-Yon in July 2019, the most serious of the offences with which the 12 students were charged, “homophobic insults,” was not retained by the judges who considered them not guilty on that count. Five of the defendants were given two-month suspended prison sentences and all were required to do community service for “obstructing a demonstration.”

The accusation – the LGBT Center of the Vendée, the “AIDES” association against AIDS and the local Family Planning Association – appealed these light sentences because they wanted legal recognition of what they thought were “homophobic insults.”

But their action backfired when the Court of Appeal not only rejected that demand but also invalidated the condemnation for “obstructing a demonstration,” leaving only minor charges that only incur fines at the most.

Benoît Fleury, one of the young men’s legal counsels, told Boulevard Voltaire, an independent news source in France, that the reign of law has been re-established,  with proper interpretation of legal texts and definitions. The defendants’ lawyers were able to demonstrate in Court that only the slightest of damage had been done; there was no trace of the bodily harm which had been mentioned in the media after the event.

A mountain had been made out of a molehill. The ICES, in its bid to show “respect” for all persons, even in their activism for so-called “LGBT rights,” had clearly overreacted in expelling two students and submitting the others to stringent obligations, including a threat of expulsion if they were not in the University building at given times.

One of the students involved in the incidents, A., who was present at the Court of Appeal of Poitiers on Wednesday, told LifeSite that he would probably not be appealing the ICES sanctions on the grounds that there were no delicts to be sanctioned. “All I'm asking for is a public apology,” he said.

A. particularly underscored that the decision marks “total victory” against the ideological steamroller that had been set against them: “Our immediate reaction is that we have obtained an immense victory on more than one count. Our main objective was to topple the accusations regarding obstruction and insults. Our victory was complete because we overturned the machinery – including the political machinery – that was at work against us.”

“The second point is that the ICES has committed a very serious fault in condemning and expelling or threatening to expel its members for offences that legally have no existence. Two young men were expelled for mere police offences. I was personally sentenced to 180 hours of community work by the University, and was under threat of 18 months suspension, while I have now been totally cleared of all charges. Even the Court's presiding judge commented on the ‘exceptional’ character of these sanctions. The ICES was indeed overzealous in this affair,” he noted.

LifeSite asked: Would they ask for the sanctions pronounced by the ICES against them to be lifted?

“It’s too late now to challenge the decisions made by the ICES but we demand an apology, because they dumped us and insulted us publicly: and we want a public apology because they were so quick and so eager to condemn us, while we are innocent,” came A.’s reply.

He added: “If I had known one and a half years ago where I would be today I would still not have hesitated to act as I did. But I wouldn’t do the same type of action tomorrow because we have neither the time nor the money to spend on this sort of thing again. But deep down, we’re convinced that what we did was good. We paid the price for what we did on the financial, legal and social planes and we will not do it again, but we are not ashamed of what we did on May 18 and of our reactions afterwards.”

Reflecting on the meaning of the victory obtained in Poitiers, he said: “To go a bit further, I believe there’s a sign of hope here. I belong to a generation that is beginning to win, and the judgment we have obtained is an example of that. If it can encourage others to stand up against the ideological machinery that was untouchable only 30 years ago, well, that's good. It's something we have won, even if the price was high.”

Was that price financial or otherwise? “The financial price was not the most important,” said our interlocutor. “We were lucky to have lawyers who made gestures to help us and people who supported us. What cost us most, and it was something that we had no idea of as 20 year-olds, was to become aware of the power of machinery that we did not know. Within three days, our faces were on a number of internet sites, we received calls from the mainstream media, we were called every name in the book by the ICES, some of us were confronted by the police, others were kept in police custody, others still had their apartments raided. For us it was truly a moral shock. I think it made us stronger, but it meant hours of struggling and arguing to try to save our own skin and to obtain justice.”