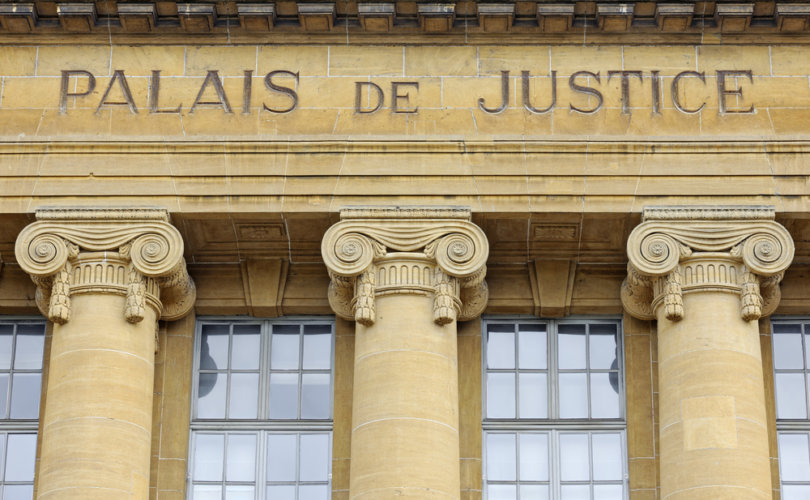 (LifeSiteNews) — Renaissance Catholique, a French lay association of traditional Catholics, was cleared Tuesday by a penal court in Paris after being accused of having “incited to discriminate against a group of people because of their sexual orientation.”

Three “LGBT” associations had objected to a published translation of the 2019 “Declaration of the truths relating to some of the most common errors in the life of the Church of our time” by Cardinals Raymond Burke and Janis Pujats, and Bishops Athanasius  Schneider, Tomasz Peta and Jan Pavel Lenga.

The ruling is clearly a victory for the Church and its teachings, but not one French bishop answered the association’s call for support in the face of burdensome legal procedures that took a great deal of time and money.

Jean-Pierre Maugendre, founder and executive manager and legal representative of Renaissance Catholique’s website that posted the Declaration, was questioned by the judges during the hearing last month.

He was represented by lawyer Jérôme Triomphe, who is known beyond France’s borders for having defended Vincent Lambert, France’s Terri Schiavo. He also was part of the successful lawsuit to affirm Catholics’ right to worship publicly when last year’s COVID lockdown was partially lifted but not for churches.

“Discrimination because of sexual orientation” is a penal offense in France under the criminal code and incurs up to one year of imprisonment and a fine of up to 45,000 euro (more than $50,000 USD).

Renaissance Catholique published the Declaration on June 13, 2019. Among important points of Catholic doctrine, the document included the following in the section “The law of God:”

The four paragraphs were quoted in the decision of the XVIIth criminal chamber of the Paris tribunal, which specializes in media offenses. It also quoted the “explanatory note,” making clear that the objective of the Declaration was to relieve the “acute spiritual hunger of the Catholic faithful all over the world for a reaffirmation of those truths that are obfuscated, undermined, and denied by some of the most dangerous errors of our time,” and to offer “in the spirit of fraternal charity … concrete spiritual help so that bishops, priests, parishes, religious convents, lay faithful associations, and private persons as well might have the opportunity to confess either privately or publicly those truths that in our days are mostly denied or disfigured.”

The judges concluded that the words considered discriminatory by “Stop Homophobia” and two other homosexual associations did not fall under France’s “anti-racist” law, which lists all possible discriminations and racist acts founded on race, nationality, religion, ethnicity, “sexual orientation,” and the like.

The three judges said that for discrimination to exist, factors that must be taken into account are the nature of the audience, how it receives information, and the “context.” A violation of the law would consist of the authors having the “intention of exhorting the public to commit illegal discrimination.”

The judges determined that this was not the case because there was no clear encouragement inciting Catholics not to celebrate same-sex marriage. They added that the Declaration signed by cardinals and bishops did not pertain to what happens in French town halls, where same-sex “weddings” take place, but the “general question of legal recognition by the state of unions between homosexual persons,” as explained in the document from the Congregation for the Doctrine of the Faith.

The tribunal also stressed the meaning and scope of the words singled out by the litigants were clearly set out in the explanatory note available to all readers and should be understood within the “lexical field” of “the moral duty” of the faithful to “bear witness to these truths” “in the eyes of the divine judge and their own conscience.” Therefore, the judges decided, the text “related to the idea of religious convictions and leads to no more, for the reader, than a personal examination of conscience.”

The judgment stated that “one of the missions” of cardinals and bishops is to “spread the teaching of the Church,” which they were obviously doing because “they explicitly quoted the reference text on the issue of same-sex civil unions,” simply recalling the Church’s position as expressed in 2003 by the CDF.

“The mere assertion that civil authorities should not create or approve of the presence within their juridical order of civil unions of people of the same sex is protected, in the absence of any exhortation to commit positive acts of discrimination, by the liberty of expression and opinion,” the decision concluded, ordering that Maugendre should be cleared of the accusation brought against him.

Remarkably, the representative of the state – the “procurator” who is charged with presenting the interests of public order – wholeheartedly supported Renaissance Catholique’s right to publish the Declaration and its assertions on homosexual acts and same-sex civil unions.

At the hearing last month, Maugendre was not afraid to challenge the modern idea that religious laws should never supersede civil laws. He said that his intention was to transmit the Church’s teaching and to recall that there are natural laws that command the positive law and condemn it as soon as it moves away from them, in the manner of Antigone.

Maugendre believes that the goal of the civil parties’ lawyer, although he denied it, was to make a strong attack against the Church. He contended that the plaintiffs’ purpose was to ensure that there would be no impediment to living out one’s homosexuality, including in the Church, by obtaining a judgment saying that French penal law is above the laws of religion.

Stressing an unusual convergence of opinion with the public prosecutor, Jérôme Triomphe outlined the real stakes of the trial, accusing the prosecution of having intellectual terrorism in seeking to outlaw a religious doctrine. Stop Homophobie, he said, was seeking to condemn the words of a cardinal who would later become Pope, a doctrine that by definition only obliges the faithful, i.e. those who freely adhere to it. According to Triomphe, the basis of the accusation had only one goal: to reconcile homosexuality with religious beliefs and to deprive the Church of its duty to witness and to teach.

Triomphe, not without mischievous pleasure, recalled President Emmanuel Macron’s speech at the Bernardins in Parais, where he told Catholic leaders that society expected Catholics to be wise, committed and free. The accusation against Renaissance Catholique was therefore only a pretext, argued Triomphe; it was necessary to harm Maugendre in order to hurt the Church, a maneuver that motivated the request for an abusive procedure.

It is necessary to understand, Triomphe concluded, that this trial is not about homophobia but about Christianophobia, which has been ongoing since the government, through COVID, has been trying to interfere in religion, and which risks leading one day to the demand that doctrine conform to the laws of the republic, with the most recent example being that of the seal of confession.