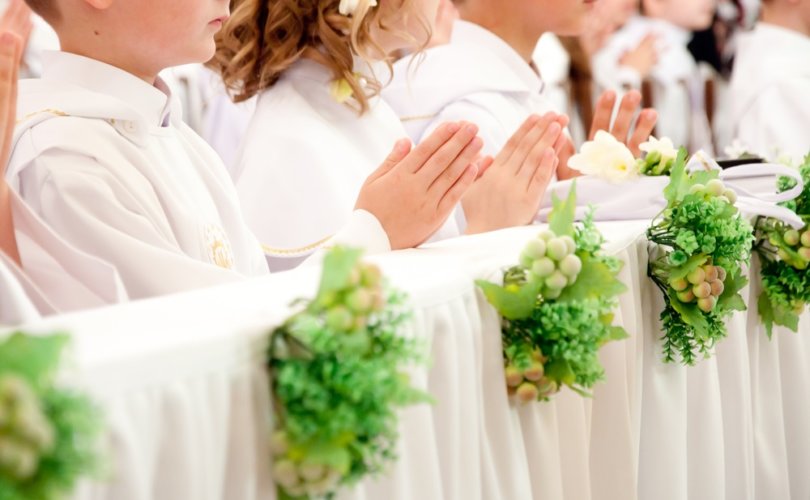 March 2, 2020 (LifeSiteNews) — “We have been warned! The mystics and the Virgin Mary in her great apparitions had announced it to us. Today our faith is being tested and God’s Church is being tested to a great extent.” Father Raphaël d’Anselme, parish priest of Saint-Patern in Vannes, Brittany, opened his Sunday homily on March 1 with an explicit reminder that the present restrictions being placed upon Catholic Masses and the distribution of Holy Communion because of the coronavirus are akin to “persecution.” There was complete silence during his homily on spiritual Communion, delivered from the traditional pulpit in the middle of the church. The faithful were astounded to learn that they would not be able to receive the consecrated Host at the end of the Mass.

A large number of French dioceses have decided to take special measures to help avoid spreading the coronavirus, including by the banning of Communion on the tongue. This was also the case in Vannes, where Catholics have been invited by Bishop Raymond Centène either to receive Holy Communion in the hands or to make a spiritual Communion of desire.

In the Saint-Patern parish, which offers the traditional Mass every Sunday morning and most days during the week, it was decided that Communion in the hand was not an option for this rite, and only the celebrating priest took the Host.

After Mass, many faithful gathered under the porch of the typical Breton 19th-century church to voice their sadness, incomprehension, and sometimes even anger at the parish priests’ reluctant decision to follow the civil authorities’ behest.

Why pick on churches? they asked. One churchgoer was just back from Paris, where he had ridden on the metro at peak hour, all the travelers tightly squashed together in hot, stuffy trains. This is allowed.

In a recent letter, Bishop Athanasius Schneider called the obligation to give Communion in the hand an “abuse of authority” because it incurs the loss of consecrated fragments and a “decrease of reverence.” He underscored that it is “no more hygienic than Communion in the mouth.”

But this is only the beginning. In some places, such as the diocese of Beauvais, in the Oise department in the north of France, and — since Monday afternoon — in Vannes, in the Breton department of Morbihan, all public masses have been prohibited following talks between the bishops and the local “prefects” who represent the central government powers.

Both Oise and Morbihan are considered especially at risk, with 38 of the 191 French “COVID-19” contaminations — at the time of writing — having occurred in Oise, while in the western part of the Morbihan, another unexpected 13 have been listed over the last two days around the river port of Auray. All schools in the area have been shut down for two weeks, and Masses will also be behind closed doors in parishes and religious communities until March 14.

Is the psychosis justified? According to medical authorities, the idea is to slow down and if possible contain the propagation of the virus, which is slightly more deadly and more easily spread than the common flu. With about one in five cases requiring hospitalization and oxygen, fears are that French hospitals will be overrun while health care professionals will be at extra risk of being obliged to take sick leave because of contamination.

But while shopping centers and public transport remain open and only gatherings of 5,000 people and more have been banned all over France, the particular attention given to Catholic churches is remarkable. It is all the more so since France — which after Italy is the second most hit country in Europe — has decided that, the second stage of contamination having been reached, with infections in different parts of the country, there will no longer be a systematic quarantine for travelers coming back from high-risk countries such as China, Iran, and Italy. Children back from winter holidays in these countries will be allowed to go right back to school.

At the beginning of Lent, the decision to suspend Masses or to oblige the Catholic faithful either to receive Communion in the hand or to go without it — as is the case for the many thousands of traditional Catholics who go to Mass in the extraordinary form of the Roman rite in France — is being considered as a sobering appeal to penance and a wake-up call at a time when they consider access to the sacraments as a given.

During his homily in Vannes, Father d’Anselme told the faithful they should pray to Blessed Imelda, who as an eleven year-old child in 19th-century Italy had only one desire: to receive Our Lord in Communion at a time when First Communion was commonly given at 14. She obtained a miracle when, during Mass, a consecrated Host escaped from the priest’s ciborium and placed itself over the young girl’s head. Because of this sign, the priest decided to give her the Host after all — and she died, “of love,” during her prayer of thanksgiving.

The priest also quoted Saint Julienne Falconieri, who because of illness was incapable of holding down any nourishment: as she lay dying, a priest placed a consecrated Host on her breast, where she miraculously absorbed it. Finally, he recalled in his sermon that the faithful should also invoke St. Thérèse of the Child Jesus, who had to wait until she was 13 in order to receive her First Holy Communion.

Remarkably, some churches and communities have continued to distribute Holy Communion on the tongue. The Saint-Eugène Sainte-Cécile parish in Paris maintained the traditional Communion rite on Sunday. Canon Marc Guelfucci, the parish priest, made clear during his homily that Communion would be given as usual on the tongue and that the priests would simply be taking precautions, regularly using antiseptic wipes during the distribution.

Bishop Pascal Roland, of the diocese of Belley-Ars, decided not to give in to panic. He published the following strong statement on the diocese’s website:

More than the coronavirus epidemic, we should dread the epidemic of fear! For my part, I refuse to give in to collective panic and to submit to the precautionary principle that seems to be operating in civil institutions.

I do not intend, therefore, to issue any special instructions for my diocese: will Christians stop gathering together to pray? Will they give up frequenting and helping their fellow human beings? Apart from the elementary precautionary measures that all spontaneously take so as not to contaminate others when they are ill, it is not appropriate to add even more.

Rather, we should remember that in much more serious situations, those of the great plagues, at a time when sanitary resources were not those of today, Christian populations distinguished themselves through collective prayer, as well as by helping the sick, assisting the dying and burying the dead. In short, the followers of Christ have neither turned away from God nor shunned their fellow human beings. Quite the contrary!

Does not the collective panic we are witnessing today reveal our distorted relationship with the reality of death? Does it not manifest the anxiety-provoking effects of the loss of God? We want to hide the fact that we are mortal and, having closed ourselves off from the spiritual dimension of our being, we lose our footing. Because we have more and more elaborate and more efficient techniques at our disposal, we pretend to master everything and we conceal the fact that we are not the masters of life!

By the way, let us note that the occurrence of this epidemic at the time of the debates on the laws of bioethics opportunely reminds us of our human frailty! And this global crisis at least has the advantage of reminding us that we live in a common house, that we are all vulnerable and interdependent, and that it is more urgent to cooperate than to close our borders!

We all seem to have lost our minds! In any case, we are living a lie. Why suddenly focus our attention on the coronavirus alone? Why hide the fact that every year in France, the ordinary seasonal flu makes between 2 and 6 million people sick and causes about 8,000 deaths? We also seem to have removed from our collective memory the fact that alcohol is responsible for 41,000 deaths per year, while it is estimated that 73,000 are attributed to tobacco!

Far be it from me, then, to prescribe the closing of churches, the suppression of Masses, the abandonment of the gesture of peace during the Eucharist, the imposition of this or that mode of Communion reputed to be more hygienic (having said that, everyone will always be able to do as he or she wishes!), because a church is not a place of risk, but a place of salvation. It is a space where we welcome the One who is Life, Jesus Christ, and where through him, with him and in him, we learn together to be living beings. A church must remain what it is: a place of hope!

Should we be cloistered at home? Is it really necessary to ransack the local supermarket and build up reserves in order to prepare for a siege? No! For a Christian does not fear death. He is not unaware that he is mortal, but he knows in whom he has put his trust. He believes in Jesus who tells him: “I am the resurrection and life. Whoever believes in me, though he die, yet shall he live; whoever hasteth and believeth in me shall never die” (John 11:25–26). He knows that he is inhabited and animated by “the Spirit of him who raised Jesus from the dead” (Romans 8:11).

Also, a Christian does not belong to himself; his life is given, because he follows Jesus, who teaches: “Whoever wants to save his life will lose it, but whoever loses his life for my sake and for the sake of the Gospel will save it” (Mark 8:35). He does not expose himself unduly, but neither does he seek to preserve himself. Following in the footsteps of his crucified Master and Lord, he learns to give himself generously to the service of his most fragile brothers and sisters, in the perspective of eternal life.

So let us not give in to the epidemic of fear! Let us not be the living dead! As Pope Francis would say: do not let your hope be stolen away from you!