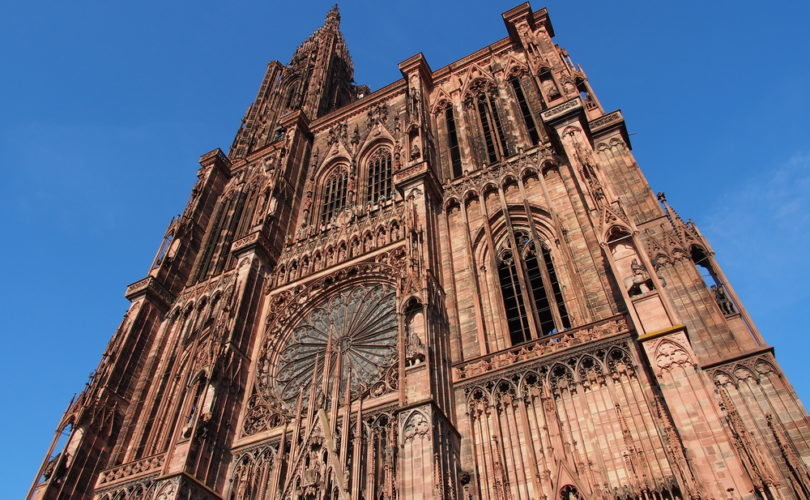 Cathedral of Our Lady of StrasbourgShutterstock.com

May 25, 2020 (LifeSiteNews) — Many cathedrals and parish churches in France opened for public Masses and other religious services over the weekend, attracting thousands of faithful deprived of public worship for more than two months because of lockdown measures related to COVID-19.

Scenes of quiet and intense joy could be witnessed as believers returned to the long-deserted churches under stringent conditions, however, as public authorities have threatened to withdraw permission for non-compliance.

On Saturday morning, the official decree allowing public religious services was published by the Prime Minister Edouard Philippe and Minister of the Interior Christophe Castaner, who famously said earlier that Catholics can pray just as well at home as in church. The announcement came five days after the Council of State gave the government eight days to modify its deconfinement rules so as to respect the “essential” liberty of worship.

According to the French bishops’ conference, civil authorities have made clear that they still prefer public worship not to resume before June 2, but their hand was forced at a time when the French government has made clear that it is prepared to allow schools and businesses to reopen while clients at supermarkets have been able to go unmasked since the beginning of confinement.

Many dioceses and parishes responded immediately, preparing churches and chapels to comply with “safety” rules. Those include: not less than 4 square meters per churchgoer, marks on benches or chairs indicating which would be accessible to the public, disinfection points for hand-washing before entering the building, and organizing one-way traffic.

Websites were quickly updated in order to inform the faithful. Often, two or three extra Masses were scheduled, on Saturday evening and on Sunday, one Mass being added at the last minute at 8:30 p.m. in one traditional ex-“Ecclesia Dei” parish in Brittany, for example, in order to let allow the faithful who were unable to come to an open air Mass in the morning, or to the regular evening Mass at 6:30 p.m., to fulfill their Sunday obligation.

In the busier parishes that are usually full to overflowing on Sundays, the faithful had to register for Mass in order to avoid having to send people away because of the local occupancy limit.

All faithful were expected to wear masks except for specific moments – such as Communion – when these cannot be required. The May 22 decree added rules for disinfecting sacred vessels before each celebration, and the celebrants’ hands with hydroalcoholic gel, before and “if necessary” during celebrations.

The decree also noted that celebrations can be prone to allowing the coronavirus to circulate more easily because of prayers said out loud, as well as chants and contact between participants, “even outside” before or after the Mass. Parishes are expected to regulate all these aspects, and local government representatives in the “departments” have been given the right to suspend authorizations or even to close churches and other places of worship should non-compliance be observed by the authorities.

While new daily contaminations in the COVID-19 epidemic have decreased steadily and dramatically – now at about 300 new confirmed cases of the illness associated with the Chinese coronavirus in a country with 67 million inhabitants, a risk of 1 in 223.000 – parishioners were careful to obey all conditions for fear of losing the right to return to church of which they had been so long deprived.

Some bishops, however, have chosen to wait. In the Diocese of Versailles, near Paris, for instance, Bishop Eric Aumonier decided public worship would not resume before May 26. This meant one more Sunday his flock would not be able to assist at Mass. He later agreed with some priests, including the rector of the cathedral, to allow a few Masses to take place yesterday.

Bishop Yves Boivineau of the Diocese of Annecy, in eastern France, published a communiqué saying that with all of the orders and counter-orders, his parishes were not ready, and he decided to wait until next Sunday, Pentecost, in order to resume public worship.

A few other dioceses chose similar, more restrictive attitudes than those allowed by the government’s decree.

In Vannes, several pages of instructions were sent to every parish by Bishop Raymond Centène. He ordered that Holy Communion would be distributed exclusively in the hand, at “sufficient distance from the minister.” “Those faithful who want to mark their respect by not touching the Host may present themselves with a cloth as a corporal in their hand,” wrote the bishop. It appears that he gave no directions as to the purification of this “corporal.”

At the local extraordinary form Mass, during which Communion can only be received kneeling and on the tongue, Communion was not distributed to the faithful. Priests are having talks with the diocese in order to recover the right to distribute Communion properly.

Bishop Centène’s exigencies go beyond those of the French government, which has reduced its interference with religious ceremonies proper, recognizing the right of priests and other religious ministers to see to a number of security measures themselves.

However, the communiqué of the French Bishops’ conference announcing the possibility that Masses would resume last Sunday made local bishops “responsible” for any situation that may arise. While it said the CEF is “happy” that Masses with the faithful are now possible, it prudently added:

“ — that the liberty is left to each official (bishops and priests) to determine the date of the resumption of Masses with assembly, and that this liberty entails their responsibility. The CEF notes that the government’s recommendation remains that liturgical assemblies should not begin until June 2. It is only next week, in fact, that the possible first effects of the deconfinement in terms of contagion will be seen.”

A number of local bishops and priests had gone to many lengths in order to distribute the sacraments and allow faithful prudently to join ceremonies while observing security guidelines both during confinement and the first weeks of partial deconfinement since May 11. Masses were read in private chapels with limited assistance, and in parishioners’ homes, or, after May 11, outdoors, confessions took place. Since then, drive-in masses were also organized in the diocese of Tulle by the bishop. Other verified cases of priests allowing faithful to join Mass as of May 11 have come to LifeSite’s attention.

If the French government had its way, public worship would not have resumed before June 1 – after Pentecost – at the earliest, according to informal remarks by Philippe when he announced a partial end of lockdown on April 28.

The French Bishops’ conference, with its president, Eric de Moulins-Beaufort, was particularly docile in accepting restrictions to public worship, moving ahead of public requirements in stopping public Masses or prohibiting the reception of Holy Communion on the tongue.

Nor did the Bishops of France protest more than half-heartedly when the exclusion from deconfinement measures was confirmed by official government decrees on May 11-12.

It was through the work of four official traditional Latin mass institutes in France, as well as the Society of Saint Pius X, the AGRIF – an association defending the rights of Christians and French citizens against discrimination – and several individuals that obtained the recognition that prohibition of public worship was an undue and disproportionate restriction to the “fundamental right” to freedom of worship.

Conservative media have commented on the fact that the bishops of France were visibly absent from a fight that was won for all Catholics by those attached to the traditional liturgy.

Jean-Marie Guénois, the religious editor of Le Figaro, commented that the decision of the Council of State allowing public Masses to resume “could be interpreted as a slap in the face” for the CEF “that did not dare file a request” in order to obtain it, even though “many bishops were in favor.”

“We can always disagree on whether or not to go before a judge. But when the very legal basis of the freedom to practice worship in France is in question, the Church as an institution cannot stand idly by. It is a question of law, and therefore of the future for believers. The highest court of the State has, moreover, recalled that they have the constitutional right to believe, to have access to places of worship and to celebrate there,” Guenois wrote.

The CEF, Guenois wrote, thought that seeking recourse would be “counterproductive” and believed “negotiation” with the public authorities would be enough. “It did not see that the head of government or the president, speaking with the ‘religions,’ would not, in the name of secularism, grant anything, to ‘Catholics’ as such. This is a mistake. Getting involved in a request to the Council of State, far from betraying negotiation between well-behaved people – which is obviously necessary – would, on the contrary, have established the seriousness and credibility of its approach. Without offending anyone, this objective legal recourse made evident the gravity of what was at stake. It gave the Church an institutional weight to the Church, which many people today deny it.”

Individual French bishops dared not disobey the CEF. But now that Masses are once again public, a number of them have shown their satisfaction.

Bishop Bernard Ginoux of Montauban went so far as to thank not only the Council of State in a tweet on Sunday but said “merci” to the organizations that had seized it. In another tweet, he added:

“Catholic #Masses. Dear Catholic faithful, you have been missing the Mass; don’t ever you miss Mass again. Christ awaits you there.”