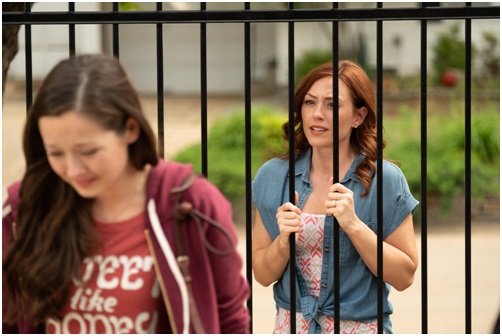 FRANCE (LifeSiteNews) – A small French private television channel, C8, is in the crosshairs of the national media watchdog CSA (“Conseil supérieur de l’audiovisuel”) because it broadcast Unplanned, the true story of Abby Johnson’s pro-life conversion after a career at Planned Parenthood. Even government ministers stepped in to condemn the program, suggesting that it might be against the law.

The full-length film was aired on Monday evening at prime time, garnering an audience of 304,000 (1.5 percent of total viewers that evening in France, instead of an average of 2 percent on other evenings, according to “PureMedias,” an audience rating agency). But the event made national headlines after a three-week long build-up of controversy that started late last month when two “off” voices for C8, Chloé Sitbon and Guillaume Orsat, went public about their refusal to contribute to teasers announcing the film.

Over the following weeks, C8 and its sister information channel, CNews, were pointed at because of their decision to air “Catholic” programs on and around August 15, feast day of the Assumption of the Blessed Virgin, patron saint of France and a national holiday. On Sunday, two Masses were aired, one celebrated by Bishop Dominique Rey in Cotignac, where King Louis XIII obtained the grace of the birth of a son to his wife Anne after 20 years of childless marriage, the other in Lourdes. Dramatizations of the lives of Pope St. John Paul II, Mother Teresa, and St. Philip Neri were broadcast non-stop on C8 last Sunday; Unplanned followed on Monday.

Angry commentators in the mainstream media slammed the channel’s owner, the billionaire industrialist and media owner Vincent Bolloré. Bolloré is known to be a practicing Catholic, although Catholicism only marginally finds its way into the schedules of his mainstream channels.

Leading up to Monday’s airing of Unplanned, a petition launched by “Grossesse imprévue” (“Unexpected pregnancy”) obtained some 20,000 signatures, asking for the deprogramming of this “misleading propaganda film” because of “the danger it represents for the vulnerable population of pregnant people.” Should C8 go ahead and show the picture, the petition said, it should at least “contextualize” it by recalling prior to its broadcast that “the right to getting a voluntary interruption of pregnancy is anchored in French law and allows those who choose to obtain an abortion to get proper medical, and if necessary, social support.”

While C8 did go ahead with broadcasting Unplanned, the channel caved in to pressure, presenting the following disclaimer before the film’s start: “In France, every woman has the right to dispose of her body as she wishes. This right is guaranteed by law. This story, which solely reflects its author’s opinion, does not signify a questioning of this right, but rather allows to measure its importance.”

This precaution did not suffice to disarm criticism and by Tuesday, the main French historic dailies such as leftwing Le Monde and Libération as well as Le Figaro (center-right) published sour accounts of the film, calling it a “flop” and mocking its evangelical Christian producers.

Libération said the film “presented as true” the story of Abby Johnson, “piling up grotesque lies in view of evident anti-abortion propaganda objectives.”

“The program was revolting for feminists at a time when this fundamental right is constantly being threatened,” it wrote. The newspaper contacted the CSA, France’s media watchdog, and was told that it had received “multiple complaints” that will lead to an “investigation” and a possible procedure against C8’s board.

Le Monde, echoing feminist publications, insisted that Unplanned unfairly presents a 13-week-old fetus as capable of feeling pain for propaganda purposes. Unplanned shows Abby Johnson being shocked by an ultrasound-guided abortion during which the unborn baby struggles to escape the abortionist’s suction tube.

“In reality, a fetus is insensitive before twenty-four weeks. Its nerve endings are not sufficiently formed in its cortex,” wrote Le Monde. Many studies challenge such an abrupt statement. Only last year, the Journal of Medical Ethics, a member of the British Medical Journals, published a paper that concluded: “We no longer view fetal pain (as a core, immediate, sensation) in a gestational window of 12–24 weeks as impossible based on the neuroscience.”

Le Figaro used a less militant tone but commented that the film “really didn’t win over the public,” and mainly mentioned government and social media critics of its airing, even providing a link to the CSA’s tutorial for public complaints about TV broadcasts. It quoted the CSA as saying that it does not intervene in the choice of programs by television stations but that broadcasters are subject to “legal obligations.” Le Figaro added that the film may constitute an “obstacle to voluntary interruption of pregnancy” (“IVG” is the legal euphemism for abortion), a delict under penal law punished by up to two years’ imprisonment and a fine of up to 30,000 euro.

The delict is defined as the “spreading or transmitting of allegations or indications such that they intentionally induce into error, for the purpose of dissuasion, about the characteristics or medical consequences of an IVG.”

As usual in such circumstances, the Unplanned “scandal” as it now called in France trended on social media all through Monday and Tuesday. Feminists called it “propaganda,” “pure fake,” “fundamentalist,” “fiction.” However, a pro-lifer on Twitter retorted: “When the authorization of medical termination of pregnancy up to the 9th month for a new reason, ‘psychosocial distress,’ i.e. legalized infanticide, was voted by stealth in the night of July 31 to August 1, 2020, you should avoid giving moral lectures, Mrs. Moreno.”

Elisabeth Moreno is the French Delegate Minister in charge of Equality between Women and Men, Diversity and Equal Opportunities. Unplanned had only been on air for half an hour when she tweeted:

“The film #Unplanned currently airing on @C8TV is a despicable anti-abortion propaganda tool. The right to #IVG means progress for our society and is a fundamental and inalienable right for all women. This fiction goes against our values. #mybodymychoice.”

On Tuesday, an official press statement signed by Moreno said the minister “firmly condemned the airing of an anti-abortion film” by C8. The film was accused of giving a “biased vision” of the reality of abortion and was responsible for “guilting women who have abortions.”

Underscoring the commitment of her ministry to make the right to abortion effective, especially during the present “sanitary crisis,” Moreno added:

By agreeing to broadcast this type of program, the television channel is in solidarity with the anti-choice movements and is guilty of the crime of obstruction condemned in our country. Based on real facts, this film puts forward scientific untruths and inexorably misleads the viewer. (…) Airing this fiction goes against our republican values of equality and liberty.

Adeline le Gouvello, one of several lawyers who head the “Juristes pour l’enfance” (“jurists for children”) association, commented: “This is inept. Abortion has never been recognized as a ‘fundamental right.’ It is an exception to a principle… that offers a possibility for a woman to obtain one.”

That principle is still enshrined in French law: “The law ensures the primacy of the person, prohibits any attack on the dignity of the person and guarantees respect for the human being from the beginning of his life.”

But it is a principle long forgotten.