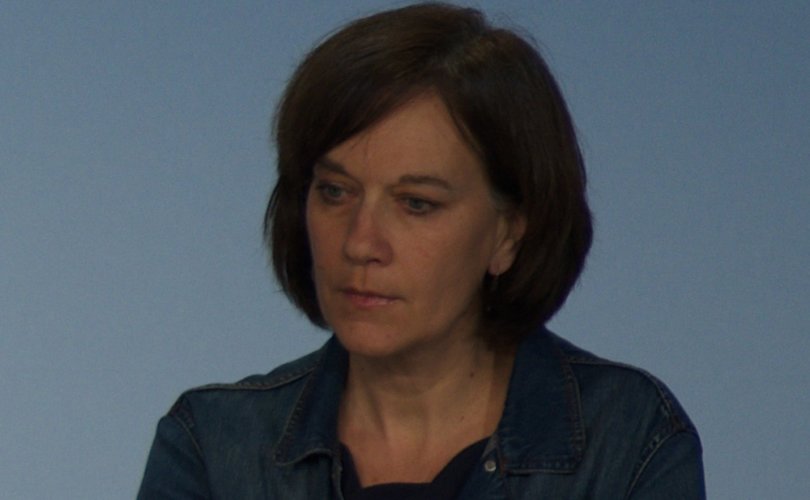 September 29, 2016 (LifeSiteNews) — The French minister for Families, Childhood and Women’s Rights is celebrating the Global Day of Action for Access to Safe and Legal Abortion with a plan to gag a number of websites that “mislead” women into thinking they give complete and honest information on abortion.

Laurence Rossignol unveiled plans to criminalize those sites that aim to dissuade women from obtaining a “voluntary interruption of pregnancy,” a procedure that is 100 percent state-funded in France during the first 12 weeks of gestation. Offenders will incur prison sentences of up to two years and fines up to 30,000 euro (about $33,650) when the plan becomes law. Rossignol has announced that the government will propose an amendment to a law entitled “Equality and Citizenship” to be examined by the French Senate on October 4.

The new offense, called “numerical obstruction,” aims to crack down on what Rossignol calls “manipulation” and “biased information” via the Internet in view of convincing women not to have an abortion.

“Moral and psychological maneuvers” in order to prevent abortion were criminalized in France as long ago as in 1993, ostensibly to prevent pro-life activists from trying to convince pregnant women to keep their baby. At the time, they were active near hospitals where abortions are performed. (In France, all public hospitals offering obstetrical services are required to procure abortions.) Fines and prison sentences were already hefty but in practice were seldom inflicted.

But the way the existing law is worded theoretically allows for prosecution of any kind of “pressure” in favor of life on a woman who is pregnant and seeking to put an end to her pregnancy. One example is that of a well-known pro-life activist, retired pediatrician Xavier Dor, who was heavily condemned last year for having shown knitted baby boots to a presumably pregnant woman at a Planned Parenthood center in Paris.

The Internet crackdown requires a new legal incrimination because it is difficult to prove that a woman has in effect been personally pushed to keeping her child by having consulted a website.

The government’s first move against Internet sites that present the negative aspects of abortion — such as www.ivg.net, which speaks of the psychological risks and the trauma of abortion, as well as of pressures on women to abort and their subsequent regret, and offers a help line — was to create a counter-site.

The official government information website on abortion presents addresses and data for a woman to obtain an abortion. It also goes to great lengths to say “post-abortive trauma” does not exist even though “some women” will have a bad experience. It opens with the words: “IVG (the French acronym for voluntary abortion, my choice, my right.”

But government efforts to minimize the impact of ivg.net and other sites that seek to tell the truth about the trauma of abortion (from the woman’s point of view…) were to no avail. Ivg.net comes up first on Internet searches and has recently been joined by a modern, savvy site called “Afterbaiz” (loosely translated to “Afterbang,” and, yes, the site is definitely and regrettably vulgar and explicit) that reaches out to the young generation and poses uncomfortable questions about promiscuity and abortion.

This last site is probably what made Rossignol boil. The tone and graphics of the site look decidedly liberated and recall official sex-education and informative leaflets for adolescents. But its message is not fully conforming to the pro-abortion stance of the French government, which the socialists have taken to paroxystic levels.

Rossignol made clear that “pro-life sites” are not in danger of being censured: “Being against ‘IVG’ is a opinion that may be publicly expressed,” she said in an interview with the left-wing Internet media rue89.nouvelobs.com. The new law aims to prosecute “dissimulation:” the fact that sites purporting to give full information about abortion are in fact hiding the fact that they want to dissuade women from aborting by making them feel “guilty.”

“Abortion is a right in France and it is recognized as such by the law. Women should be able to choose with complete freedom,” she said.

The minister indicated that sites such as ivg.net and Afterbaiz should only be allowed to function if they present themselves clearly as being anti-abortion. She is intent on forcing compliance by means of heavy fines and imprisonment.

A look at the government information website (www.ivg.social-sante.gouv.fr) shows, however, that women can’t expect complete information at that site, which is unequivocally pro-abortion. It explicitly denounces “certain sites” that speak about maternity as well as about abortion, and it downplays the possible bad effects of abortion on the mother. Even in its description of surgical abortion, it speaks about the removal of the “egg.”

Rossignol, in her interview with rue89, discusses the “vulnerability” of women who are pregnant and clearly accuses those who would try to bring them to abandon the idea of abortion. She also says government information is not intended to induce women to have an abortion. She speaks of the “toxicity” of websites that speak of the true trauma of abortion, suggesting that she could not even imagine speaking with their leaders and moderators. She wants to “protect women and girls.”

And what about the liberty of the press and of the Internet? Rossignol proclaims that she cannot “limit liberty of opinion.” She only wants to “limit the dissimulation of an opinion,” she told rue89. But everything points to the fact that it is the opinion itself – any expression of a pro-life, anti-abortion stance, however cautious – that should be punished by French penal law.