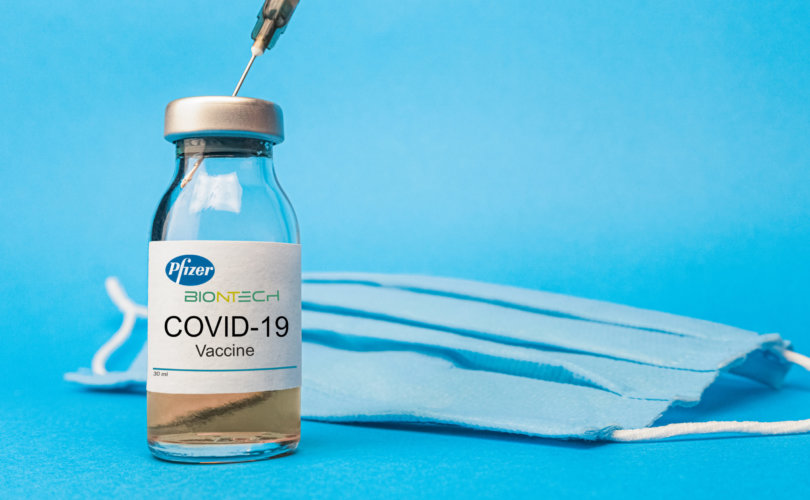 December 11, 2020 (LifeSiteNews) — Professor Eric Caumes caused the equivalent of a medical earthquake by stating Wednesday evening that he has never seen as many undesirable effects with a vaccine as with the Pfizer injection that is scheduled to be widely distributed in France starting in January.

Caumes, head of the infectious and tropical disease department at a major Paris hospital, is part and parcel of the fear game around COVID-19, favoring France’s second lockdown that became effective at the end of October and promising a “third wave” of infections and disease if “barrier gestures” are not observed and people don’t limit the amount of family dining together at Christmas.

He has clearly stated that he will take a anti-COVID-19 vaccine as long as it is not an “RNA” vaccine like those being distributed in the United Kingdom now. “RNA” vaccines are expected to start in France in January with the residents of care homes for the elderly.
Caumes has voiced concerns regarding these vaccines. He complained earlier about the lack of available scientific data from their results and side effects, saying he would never blindly trust the vaccine industry merely on their press releases.

On Wednesday, Caumes went much further in an interview he gave to the French daily Le Parisien. After seeing a report on the Pfizer vaccine from the American Food and Drug Administration (FDA) on Tuesday evening, the data used by Pfizer to obtain marketing auhorization turned out to be a shock.

Caumes measured his words, saying, “As I read the 53 pages, something struck me. I have never seen such a high frequency of adverse events for a vaccine. Apart from minor injection reactions such as local redness and pain, other side effects occur at relatively high rates, especially in young people and after the second dose.

“Take the example of fever. It can occur transiently after an injection; it is classic. But here, 15.8 percent of 18- to 55-year-olds had a fever of 38 degrees Celsius or higher within seven days after the second injection. And 45 percent had to take medication for fever or pain. Another 55 percent had headaches and 62 percent were tired. No, really, that's much too much, perhaps there's a problem … ” Caumes said.

Considering France, with less than 68 million inhabitants, has already bought enough vaccine doses to give double shots to 100 million people, including from Pfizer, such a declaration obviously will have repercussions in a country where about half of the population, according to surveys, does not intend to get an anti-COVID-19 vaccine.

Caumes' statement is significant because as a doctor and a university professor who cannot be suspected of not supporting the French government’s management of the Wuhan virus, he is saying the Pfizer RNA vaccine is not safe and should not be recommended given the lab’s own data, which was decidedly late in coming to specialists’ attention.

In the interview, Caumes was subsequently asked him what he thought of the situation in England, where two days into the first vaccination campaign the authorities issued an emergency recommendation asking people with severe allergies not to take the Pfizer injection after two patients suffered from severe side effects.

Caumes’ response gives rise to further concerns. “I'm surprised because these adverse reactions are not listed in the U.S. drug agency document, which is my only source,” he said. “This confirms that we should not rush.”

Nevertheless, Caumes would still advise elderly people most at risk from getting severe forms of COVID-19 and dying to take the Pfizer or Moderna RNA vaccines because of what he considers to be a favorable benefit-risk balance.

But he did not advise young or healthy people to do so. “Not only is there a lack of information, but these injections based on genetic material (messenger RNA) have never passed the commercialization stage until now,” Caumes said. “Perhaps they are revolutionary, but I want proof of their reliability, otherwise it is tantamount to placing blind trust in industry.”

Is the vaccine really the only solution for frail elderly people, as Caumes appears to suggest? It should be noted that official guidelines in France include asking people who test positive for the Chinese coronavirus to stay at home with paracetamol as long as they are not in respiratory distress.

While many doctors and hospitals are now ignoring this advice and many patients are actually receiving treatment, the situation is not good in care homes for the elderly, with about one person in four who tests positive dying of COVID-19 and, if necessary “helped” along with a dose of muscular relaxant Rivotril, which was officially recommended in these situations outside of its normal medical indications.

This is true in many places but not in Marseille, where local firefighters set up a testing system of sewage waters in care homes for the dependent elderly, allowing them to receive immediate notification of SARS-COV-2 infections there. In these homes, the elderly are treated with Professor Didier Raoult’s protocol (including hydroxychloroquine when possible, a proper antibiotic, azithromycine and zinc) and the mortality rate is much lower. Some 15 percent of the infected die instead of over 25 percent in comparable homes elsewhere. These are the most fragile people regarding COVID-19.

Caumes will probably face more backlash from French authorities for his outspokenness. His condemnation of the rush to obtain Pfizer and Moderna vaccines was already seen as an obstacle to France’s vaccinal policy. French Health minister Olivier Véran immediately reacted, saying that Caumes “sometimes speaks nonsense.”

But Caumes repeated his critique to Le Parisien, stating, “Pfizer and Moderna simply announced their success in a press release. In my career as a physician, I've never seen anything like this before. You have to realize there is still no trace of scientific publication. We're walking on our heads.”

He also told the newspaper that he is afraid that he'll play into the hands of the “conspiracy theorists.”

“Yes, I am terribly afraid of it, but as soon as you step out of the single dominant thought, you are immediately considered to be a conspiracy theorist or an ‘ass,’ as Véran called me, even though I am one of those who defend vaccines the most,” Caumes said. “They are the miracles of infectious diseases, the most intelligent drugs there are, since they prevent rather than cure. But I tell people the truth, otherwise they will no longer trust us, the doctors … ”

He added that he was concerned that things “are not going well with these COVID vaccines.” Warning that this could backfire, especially since the French government has already ordered and paid for them “without even knowing if they were safe,” he said.

“If we mess this up, the entire history of vaccinology will be discredited,” Caumes said.

— Article continues below Petition —
SIGN: Join petition calling for a stop to COVID vaccine testing in Europe
Show Petition Text
16580 have signed the petition.
Let's get to 17500!
Thank you for signing this petition!
Add your signature:
Show Petition Text