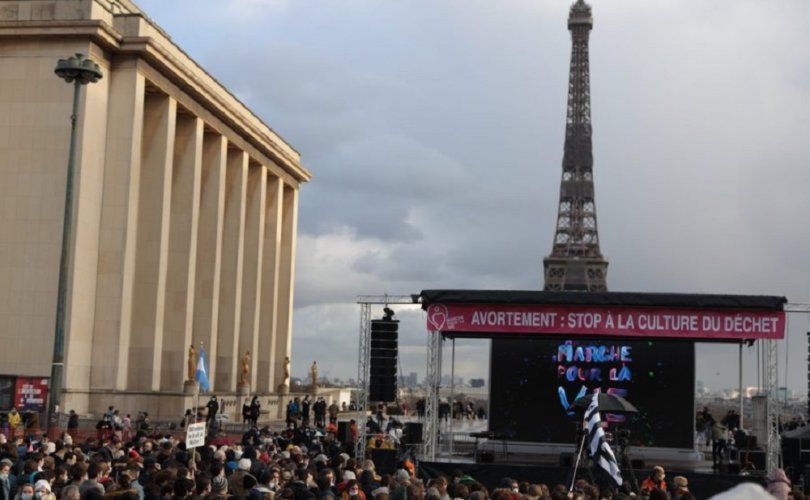 January 19, 2021 (LifeSiteNews) — Several thousand pro-lifers joined an innovative March for Life on Sunday in Paris: because of COVID restrictions, a static demonstration was preferred to the traditional walk through the streets of the French capital. A Zoom meeting was held simultaneously, which garnered over 15,000 connections during speeches and music that lasted one and a half hours. The March took place in a particularly somber context as several anti-life laws are being discussed in Parliament over the coming weeks and months.

The fact that the March took place “live” was by itself a small miracle. There was a great deal of uncertainty over possible new COVID restrictions that could have meant a weekend lockdown or gone all the way to full lockdown. Finally, last Thursday, a nationwide curfew starting at 6 P.M. was put up as of Saturday, forcing the March to change its schedule at the last minute. Traffic jams have increased wildly as people hurry to get home on time — and avoid the $150 fine for first offenders. For people living far out in the suburbs of Paris or in the provinces, undertaking a lengthy trip was not in the cards.

Despite this year’s crucial pro-life concerns, significantly fewer people than in prior years joined the demonstration on the Place du Trocadéro, with its view on the Eiffel Tower across the Seine from the “Esplanade des Droits de l’homme” — the Human Rights Esplanade. But the virtual meeting via Zoom turned out to exceed the organizers’ expectations by far, making the event to be the largest ever “physical and virtual demonstration ever,” according to the organizers.

These are a group of representatives of historic pro-life groups including “Choisir la vie” (Choose Life), which originally founded the Paris March; the Fondation Jérôme-Lejeune, which funds research for “illnesses of intelligence” such as Down syndrome and also brings medical help and advice to families facing trisomy, as well as creating clear and simple documents about right-to-life issues; “Alliance Vita,” which aims to counsel women in distress and educate about life issues; Renaissance catholique, a traditional Catholic association that launched the first regular prayerful yearly pro-life march in Paris before joining the Marche pour la vie; and others.

These include “SOS Tout-petits” (SOS for all the little ones), whose founder and president, Dr. Xavier Dor, died during the spring epidemic of COVID-19. Faithful to its identity, its members gathered at some distance from the main group of demonstrators to say the rosary and sing hymns such as “Christus Vincit” — Christ will conquer.

At a press conference before the event, the March’s new president, Nicolas Tardy-Joubert, a political representative and a former leader of the “Manif pour tous” that organized one-million-strong demonstrations against same-sex “marriage” in France in 2013, underscored France’s bad results regarding legal abortion. It reached an all-time high in 2020 with over 232,000 abortions: “We are doing worse than Italy and Germany, which have comparable populations,” Tardy-Joubert complained. France’s neighbors register “only 100,000” abortions per year, and it should work to bring its abortion numbers down by half so as no longer to be the “problem child” of Europe. “We should have better understanding of the reasons and the consequences” of abortion, he told the internet daily FranceSoir on the day of the March.

Tardy-Joubert also underscored the suffering and depression caused by abortion in women, who are often pushed to choose abortion, stating that most women don’t freely choose to have an abortion.

In a general way, the March’s organizers put the focus on “the violence and suffering inflicted on both mother and child” without loudly demanding the abrogation of all abortion laws, which have certainly become worse and worse since the initial decriminalization in 1975 through amendments and scrapping of a number of prior conditions to end a child’s life.

Striking visual communication did mark this edition of the Paris March for Life. One panel showed chicks on a conveyor belt with the question: “Are you shocked that chicks should be crushed alive? So are we. So what about human fetuses?”

As France is facing a new bioethics law that would permit the creation of chimeras, gene editing, embryo research, and other transgressions, including “medical” abortion for psycho-social reasons right up to term, Jean-Marie Le Méné, president of the Fondation Lejeune, told LifeSite that the problem with France’s “drifting” laws is that it is “difficult to go back to the beginning.” “It is important to stop talking about going back to the horses of Troy that allowed the drift in the first place: for abortion, it was clearly the 1975 (Veil) law[.] … [S]ome … talk about going back to the ‘spirit’ of that law. There are also the bioethics laws of which some say that the ‘cathedral’ of the bioethics law is burning, as if they were initially magnificent. But this is totally untrue: the first bioethics law permitted medically assisted artificial procreation, which is wrong. That did more harm, perhaps, than opening up artificial procreation for all women (celibate and lesbians) will ever do, because this might not be extensively used.”

Marie, a young midwife with more than eight years’ experience, spoke more specifically about her fears regarding new attempts to overthrow the right to conscientious objection for health care providers, a plan submitted to parliament by a group of ecologist members of the National Assembly and that was adopted at its first hearing in October. She said she would “not be the right person” to do an abortion because it is so abhorrent to her that she would not do it correctly. She insisted that conscientious objection is a human right.

She later told LifeSite that her training as a midwife had been difficult because she could only hope to be exempt from abortion procedures; this didn’t work, and she was obliged to be present at a late “medical” abortion, but she left the operating room in tears during the procedure. She has been able to avoid any direct implication in abortions in her professional life. If the objection clause goes, she told LifeSite, and she were to end up in a position where she could not refuse to participate in an abortion, she would abandon her career as a midwife.

Conscientious objection, bioethics laws, and the plan to lengthen the period when abortion can be obtained without conditions from 12 to 14 weeks’ gestation, were at the heart of the subsequent meeting. The public was a mix of generations, with many masked to comply with COVID-19 measures, which gave an uncanny air to the event. While the March is non-denominational and does not encourage public prayers, a dozen diocesan priests joined the demonstration, and some prayed quietly with their flocks. Bishop Dominique Lebrun of Rouen was present in person; Bishop Bernard Ginoux of Montauaban, in the southwest of France, stated publicly that he had joined the Zoom event.

Another pro-life demonstration will take place in Paris on January 31, this time aimed at rejecting the revision of bioethics laws that is soon to be discussed by the Senate.

Jean-Marie Le Méné had this parting message for LifeSite’s American readers: “It’s good news that we, the French, should be on the ground; France has a good record for resistance. We are a revolutionary people; but also a counter-revolutionary one. We are used to opposition, and for Catholics who resist, we are happy to have registered a few small victories this last year.” He recalled the successful fights to obtain less stringent conditions for public Masses despite COVID-19.

Le Méné added: “Perhaps Americans will feel uplifted by this part of France that is uplifted; in any case I would like to extend a message of friendship and support to America, which is entering into very difficult times — at least as difficult as the ones we are facing here. But we are also counting on them, because Americans are also an example as regards respect for life: when they are really Catholic and pro-life, they go all the way, and that is not always the case here in France, where a number of people accommodate evil. In the U.S., when you’re pro-life, you’re pro-life; you just don’t argue about that. … In France, hospitals bearing names of the saints have ‘orthogenic centers’ where abortions can be done. We really need to help and support each other. If we in the U.S. and France can assist each other morally, psychologically and spiritually, I believe it will be a very good thing.”