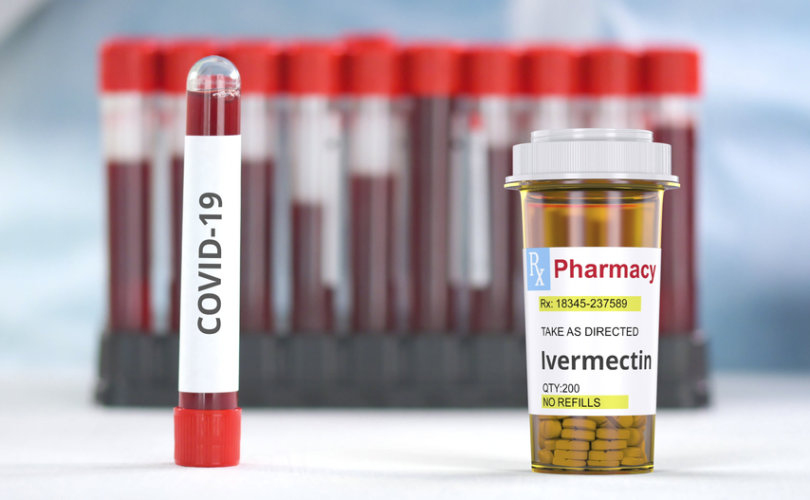 July 19, 2021 (LifeSiteNews) – Ivermectin (IVM) attenuates COVID-19 inflammation and other clinical symptoms in animals infected with SARS-CoV-2, according to a recent study by the French Pasteur Institute. The paper was published in EMBO Molecular Medicine last Monday and states clearly that “standard doses” of Ivermectin can prevent clinical deterioration and reduce olfactory deficit. The abstract noted: “Altogether, this study supports the use of immunomodulatory drugs such as IVM, to improve the clinical condition of SARS-CoV-2-infected patients.”

In a normal world the Pasteur Institute’s study would mark a turning point in the COVID-19 crisis, relativizing the “vaccine” narrative. It is remarkable that the study was published on the very day that French president Emmanuel Macron announced what amounts to mandatory vaccination for the entire population aged 12 and over: compulsory vaccination of all healthcare workers and members of related professions, and a universal COVID passport that would require testing every two days for those who refuse the jab to be able to live normally – with a 10,000 euro fine for individuals who would try to enter cafés, restaurants, hospitals, homes for the elderly, long-distance trains and coaches, cinemas, shopping centers, and the like.

The first line of abstract of the Pasteur study, led by Guilherme Dias de Melo, de facto cast severe doubts on the relevance of the exclusive “vaccine” policy of the French government, stating: “The devastating pandemic due to SARS-CoV-2 and the emergence of antigenic variants that jeopardize the efficacy of current vaccines create an urgent need for a comprehensive understanding of the pathophysiology of COVID-19, including the contribution of inflammation to disease.”

It continued: “It also warrants for the search of immunomodulatory drugs that could improve disease outcome. Here, we show that standard doses of ivermectin (IVM), an anti-parasitic drug with potential immunomodulatory activities through the cholinergic anti-inflammatory pathway, prevent clinical deterioration, reduce olfactory deficit, and limit the inflammation of the upper and lower respiratory tracts in SARS-CoV-2-infected hamsters.”

The study showed that Ivermectin did not reduce the viral load of the infected hamsters but did “dampen” and “modulate” several types of inflammatory response, even “dramatically” reducing “the Il-6/Il-10 ratio in lung tissue.” The researched noted that IVM “promotes macrophage M2 polarization, which might account for the more favorable clinical presentation of IVM-treated animals.” It was more efficient in female than in male hamsters.

Ivermectin, at first used for the treatment of veterinary parasitic diseases, earned its promoters for use in humans against tropical parasites, William C. Campbell and Satoshi Ōmura, the 2015 Nobel Prize in Physiology or Medicine.

Repurposing of the molecule for use against COVID-19 is now widespread – in particular in India – but the cheap drug is being almost systematically side-lined by health authorities in many countries in the world, despite empirical data showing that users are at a far smaller risk of hospitalization, while patients who have already developed a severe form of the disease have better outcomes.

These data are ridiculed by many health authorities: the FDA warns against the use of Ivermectin not only in veterinary form (which seems mere common sense because of improper dosage) but even in forms approved for human beings: “Taking a drug for an unapproved use can be very dangerous. This is true of ivermectin, too.”

The World Health Organization is also trying to get people not to take Ivermectin as a remedy against COVID-19, with its official guidelines recommending that “the drug only be used within clinical trials.”

The Pasteur study, on the other hand, is very positive about IVM as a treatment for COVID-19. Although it was conducted on hamsters, its methodology allowed the team of researchers to observe and monitor the drug’s action and effects on the lung tissue of the treated animals, in processes that are comparable to what happens in humans infected with the Wuhan coronavirus.

The results of the study, as presented by Dias de Melo and his team, were particularly affirmative:

We report that ivermectin, used at the standard anti-parasitic dose of 400 µg/kg, protects infected hamsters from developing clinical signs and from losing the sense of smell during SARS-CoV-2 infection. The treated animals exhibited a specific inflammatory response, presenting a reduced type I/III interferon stimulation and a modulation in several intracellular signaling pathways, with an important reduction of the Il-6/Il-10 ratio and promoting M2 polarization of myeloid cells recruited to the lung. These effects are strongly influenced by sex, with treated females exhibiting the best outcome. Surprisingly, ivermectin treatment did not limit viral replication, as treated and non-treated animals presented similar amounts of SARS-CoV-2 in the nasal cavity and in the lungs.

The complete study is available here.

The French mainstream press widely quoted the study, in particular Dias de Melo’s statement regarding the “scientific demonstration” that Ivermectin has a “protective activity” in animals infected with SARS-CoV-2 that have developed a “moderate to severe” form of the disease.

The supposedly conservative daily Le Figaro deliberately downplayed the importance of the research, pointing at the gullibility of “anti-vaxxers” who applauded the study. The daily accused them of having “forgotten” that official studies have concluded that positive studies on IVM are “very unreliable” and that the WHO does not recommend it.

Prominent vaccination promoter Dr. Laurent Alexandre, who believes in upgrading man in the context of the rise of artificial intelligence, even published a tweet saying the Pasteur study only shows “the reduction of one minor symptom in a tiny subgroup of female hamsters and only females” (olfactive loss) and “no impact on serious symptoms.”

All those who take the trouble to read the research can see he is lying in plain sight.