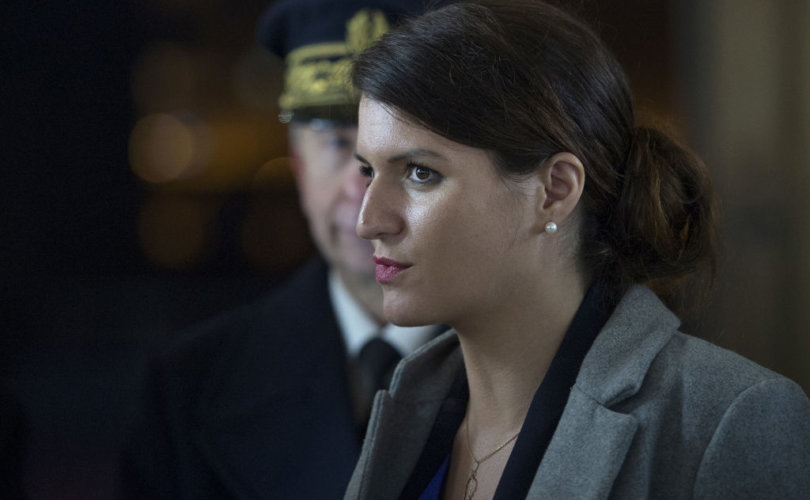 March 1, 2019 (LifeSiteNews) – “I don’t put the ‘Manif pour tous’ (The Protest for Everyone) and Islamist terrorists on the same level, but I am underscoring that an ideological convergence does exist.” With these words, French Secretary of State for “Women-Men Equality and against Discrimination”, Marlène Schiappa triggered indignant responses from the movement against homosexual “marriage” that put hundreds of thousands in the streets during the parliamentary debate in 2013 and represents millions of conservative French people. Schiappa was forced to present an apology but the affair remains typical of the present political climate which disqualifies any opposition to “LGBT rights” as “homophobic.”

Schiappa’s controversial statement was made in a wide-ranging interview with the conservative weekly Valeurs actuelles in which she also said:

There is currently an explosion of anti-Semitic, but also homophobic acts. These two population groups are suspected of being rich. Homophobia and anti-Semitism also have in common that they are radical Islamist theories which  make scapegoats of these people. There is an alliance between extreme right-wingers and Islamic radicals, who are united in practice in their fight. Some slogans of the ‘Manif pour tous’ were launched in the suburbs.

The word “suburbs” in France designates the ethnic, often dangerous neighborhoods near the major cities.

Valeurs actuelles journalists retorted: “French people have died because of Islamist terrorism. The ‘Manif pour tous’ put up to one million people in the streets and there wasn’t even one scratched car. We don’t know what slogans you’re talking about, but as a rule they were about the substance of the debate. Don’t you think your relativism and your accusations of collusion are shocking?”

The interviewers responded by saying: “The ‘Manif pour tous’ stood for ‘one dad, one mom’ – that isn’t a call to murder homosexuals!”

Schiappa replied: “Comparing the baby to a genetically modified eggplant is not an intellectual argument in my opinion. I am also an elected representative from the Sarthe [a rural department in the West of France] and I can tell you it’s very difficult to be gay in an agricultural college. In France, gay bars have their windows broken, videos are shared on the social media where you see couples being beaten up because they walk hand in hand. I don’t put the ‘Manif pour tous’ and radical Islamic terrorists on the same level, but I am underscoring that an ideological convergence does exist.”

The interview was published on February 20th, and most mainstream media immediately picked up its most controversial phrase. That same day, the “Manif pour tous” condemned the “scandalous equation” of opponents to same-sex “marriage” and Islamic terrorists.

“It’s an insult to the millions of French people have been mobilized since 2012 in order to bear peaceful witness to their commitment to the rights of children and the family,” read its communiqué. “Caricatures and verbal violence are completely out of place in the public debate. Too much is too much,” it added, calling Schiappa’s “provocation” a bad sign in view of the upcoming debate on the revision of France’s bioethics law, in which the government wants to open access to artificial procreation to homosexual couples.

The same statement said the “Manif pour tous” was “waiting for an immediate apology from Marlene Schiappa.” Bruno Retailleau, head of the “Republicans” at the French Senate also denounced “Marlène Schiappa’s shortcuts.”

The Secretary of State did finally present an apology via her Twitter account on February 22: “I apologize to all those who may have sincerely felt themselves hurt”, she wrote, adding that she “assumes responsibility.”

But acknowledging that people are feeling hurt is just a way of shifting the blame. Schiappa did not retract her statement nor did she apologize for the words she used.

On the contrary, she attempted to exonerate herself by presenting the “context” of the interview: “In the course of a discussion that lasted close to two hours, I underscored the ideological convergence between diverse schools of thoughts that meet in their refusal of otherness, the questioning of women’s rights or LGBT+ rights,” she explained.

Schiappa is of the opinion that her comments were misunderstood. “When a message is badly received it means it has been badly expressed. The people who joined the ‘Manif pour tous’ are obviously not terrorists,” she clarified.

But according to French conservative daily Le Figaro, Schiappa’s comments were not off-the-cuff remarks. The text of her complete interview was submitted both to the Prime Minister’s and President Macron’s cabinets for validation before she gave the green light for its publication by Valeurs actuelles.

This means, of course, that it is not only a 36-year-old Secretary of State, well known for her blunt replies, who considered it legitimate to compare – even loosely – the opponents to same-sex “marriage” to Muslim radical terrorists, but the highest authorities of the State who put Islamic thought and violence on the same plane as the defense of the traditional meaning of marriage.

Ludovine de La Rochère, president of the “Manif pour tous,” has filed a complaint against Marlène Schiappa. In an interview with La Croix, the unofficial daily of the French episcopate, she made clear that her organization has received hundreds of furious messages from people who are hurt and angry, asking it to react firmly.

“Does Marlène Schiappa realize what she’s saying? When you think of the Bataclan massacre, of the Nice terrorist attack or the murder of Fr. Hamel in Saint-Etienne-du-Rouvray [the Catholic priest whose throat was slit by a Muslim radical while he was celebrating mass in his Normandy parish], we just can’t let such a parallel go unchallenged,” said La Rochère.

She added that the group had repeatedly asked Schiappa for a meeting, without success and even without obtaining a response. “The last time was six months ago. (…) She has a perfect right not to be on the same line as we are, but you can’t just avoid debate by disqualifying those with whom you don’t agree.”

La Rochère said she was prepared to withdraw the current lawsuit if Schiappa finally agrees to talk with “La Manif pour tous.”