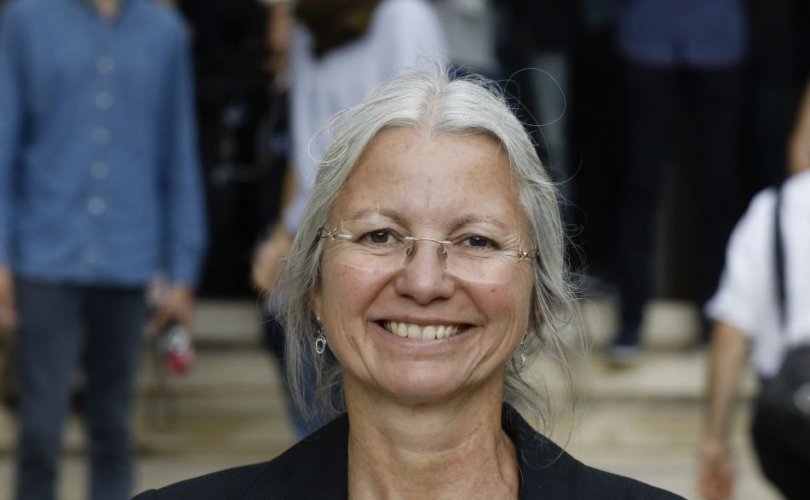 July 2, 2019 (LifeSiteNews) – Agnès Thill, an elected representative of the people at the French National Assembly, was excluded from the presidential “République En Marche” (LREM) party on June 26 for having opposed access to artificial procreation for single women and lesbian couples. She intends to appeal that decision in the civil courts and has accused President Emmanuel Macron’s “En Marche” movement of totalitarianism.

“The frequency and pernicious nature of Agnes Thill’s words generate and nourish an aggressiveness that are harmful to the serenity of the debate,” the party said in an official statement.

She has also been expelled from the parliamentary group “En Marche,” which obtained a large majority in the 2017 legislative elections and is in a numerical position as a party to vote any law or disposition it sees fit.

She has asked the party to reimburse the 10.800 euro contribution she made on her official parliamentary funds covering the 27 months until the next elections.

Thill frankly opposes all forms of medically assisted procreation that “create” children without a father. She has been particularly vocal on the subject over the last year, since President Macron promised to make good on his campaign commitment more widely to open access to “PMA,” as it is called in France for short.

French laws and regulations severely limit access to artificial reproduction techniques to married or stable man-woman couples who have been together for at least two years and can provide medical evidence of a fertility problem or who are at risk of transmitting a grave genetic disease or anomaly. The government's draft bill, that should reach the National Assembly for debate by the end of July, intends to scrap these conditions.

Provided a woman is of fertile age and has a green light after a compulsory psychological assessment, she will have access to elective in vitro fertilization or artificial insemination, paid for by the social security system, according to the draft law’s present wording.

Thill has repeatedly condemned the form taken by LREM’s announcements and draft bill, complaining that the party never committed to legalize the creation of children without fathers, nor the financing of the procedure with taxpayers’ money.

In November 2018, she published a tweet deploring the presence of a “powerful LGBT lobby at the National Assembly.” She later apologized for those words “that may have offended some of her colleagues and others.”

She also stated that Muslims in France would choose Coranic schools for their children, as well as increasingly communitarian lifestyle for themselves if the government and Parliament were to go ahead with their plan, because of Islamic opposition to the scrapping of the traditional concepts of fatherhood and motherhood.

In a statement explaining why Thill was no longer accepted as a member of the party, LREM provided a list of her declarations, interviews, tweets and press statements contrary to the “general politics of the government” and public stances on the part of several ministers.

Her criticism of access to artificial procreation for homosexual couples was first on the list, but also that of motherhood, which has been explicitly rejected in view of the coming revised bioethics bill that will include “PMA” for all.

Her expulsion from the “En Marche” party was also warranted, said the official statement, because on several occasions she has said “homosexual and heterosexual couples find themselves in different situations and are therefore not to be submitted to equal treatment.”

She is also being criticized for having spoken against an LREM junior minister, self- proclaimed homosexual Gabriel Attal, who has made public his desire to obtain a child through surrogacy. A French activist homosexual association, “Stop Homophobie,” already asked for Thill’s expulsion. Surrogate motherhood is currently illegal on French soil.

The LREM communiqué finally quoted an interview given by Thill to the monthly L’Incorrect in which she called secularism and sexual orientation forms of “communitarianism that lead to the death of the common good.”

Thill reacted angrily to her expulsion, recalling that the French Council of State has itself in recent times excluded lesbian couples from access to artificial reproduction because “couples formed by a man and a woman are in a different situation, regarding procreation, than same-sex couples,” and that she has been excluded for having tweeted those exact words.

Why did Thill not leave the party of her own initiative, she was asked during a radio show on RMC last Thursday. “It would have given them too great a satisfaction,” she replied.

Explaining that she had been subject to an “incredibly violent harassment” during the last year on the part of her own party colleagues, she added that her exclusion has allowed to verify that France “we are no longer in a democracy.”

Commenting on “En Marche’s” position of power at the National Assembly, Thill added, “We have no opposition, so we have a single party, and everything is up to us, for good or for bad … We have just certified the end of pluralism. So what’s left? The worst. Honestly, this country is in a serious condition.”

“To be excluded from a sectarian party is a great honor,” Thill also remarked, adding in another interview that she has been sanctioned for a “thought crime.”