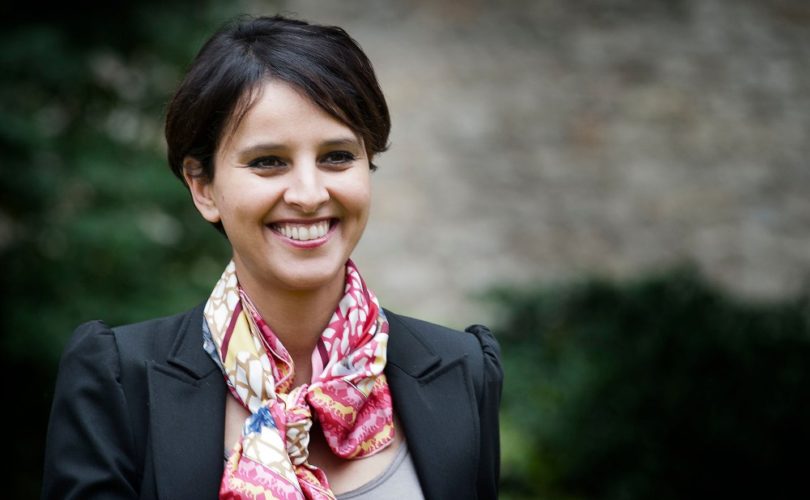 Pro-family and pro-marriage advocates have reacted angrily to the nomination of France’s new minister for education, Najat Vallaud-Belkacem, 37, one of the governing Socialist Party’s most prominent defenders of gender ideology and same-sex “marriage.”

They are calling it a “provocation” and an “act of defiance” on the part of President François Hollande.  He is facing a major political crisis that has obliged him to reshuffle his team under Prime Minister Manuel Valls. In a context of rising discontent, Vallaud-Belkacem is a divisive figurehead. Her nomination is seen as a declaration of war against family rights.

Born in Morocco, Vallaud-Belkacem came to France at age 5 with her mother and sister to join her immigrant father. A brilliant student, she crossed a number of hurdles of the very formal French education system, graduating from the Institute of Political Studies in Paris. She soon joined the Socialist Party where she got involved in immigrants’ and women’s rights. She married Boris Vallaud in 2005. The couple has a boy and a girl, twins, whom they bring up, as she said in an interview in a French glossy magazine, to reject “gender stereotypes.”

As soon as François Hollande came into power, Vallaud-Belkacem obtained the post of minister for women’s rights, where she was active in organizing full social security refunds for abortion. She instigated a program against “gender stereotypes” in elementary schools, called “The ABCD of Equality,” which was tested in several academic regions in France before being pulled back under heavy protest from pro-family advocates. During this struggle, a number of government officials proclaimed that “gender theory does not exist.” Vallaud-Belkacem participated in the revision of the bioethics laws which consecrated the “right” to conduct experiments on human embryos, and intensely supported same-sex “marriage” which became legal in June last year.

Vallaud-Belkacem also authored and defended the recent law for “Real equality between women and men,” which scrapped the “distress” requirement for obtaining legal abortion and introduced a number of measures in favor of interchangeability between men and women. The law explicitly requires measures to be taken “in order to bring to the attention of the public French and international research on the social construction of gendered roles.”

In her new post as education minister, Vallaud-Belkacem will be at the heart of the French Republic’s intricate and centralized political system: the nervous center from which moral indoctrination can proceed, reaching the smallest of schools in the most secluded villages of rural France.

The French school system, be it public or private but under contract with the state, is centrally supervised by unelected state authorities and inspectors who lay down the curriculum in detail for all classes, from Kindergarten up, and verify that the official programs and methods are being taught by an army of public servants. It employs over a million teachers, professors, and administrative personnel. All teachers must follow official courses before being permanently engaged: they include group dynamics and other psychological methods that are regularly criticized by those few young teachers who dare to dispute official methods.

Items in the official curriculum for high school include graphic “sex education,” depiction of abortion as a woman’s right, gender ideology, sexually explicit works of literature and thematic history – many French youngsters have no idea whether the Middle Ages came before or after Victor Hugo and have never even heard of Joan of Arc.

Only completely private schools, which get no public funds at all, are free of this tutelage.

Vallaud-Belkacem is not the first ideologist to reach the coveted post of minister for education. When Hollande was voted into office, he chose Vincent Peillon, a specialist of the French Revolution who wrote many books explaining that secularism must replace Catholicism as a lay religion. Peillon made no mystery of the fact that he considered “schools of the Republic” as a means to sever children from their family traditions and beliefs. He went on to become a European MP earlier this year.

Najat Vallaud-Belkacem was close to Peillon during the campaign which led to Hollande’s election. She has already stated that under her office, schools will be intent on their task of teaching children “reading, writing and arithmetic” – more that 20 percent of French children cannot do any of these properly by the time they reach 6th grade – and on “promoting equality between girls and boys.”

Ludovine de La Rochère, president of the “Manif pour tous” (Demonstration for all) that put millions in the streets against same-sex “marriage” last year, said on Wednesday morning that Vallaud-Belkacem is promoting “an anthropological utopia, in which sex conflict takes the place of class conflict.” In another statement, the organization says it is worried about future developments in the wake of her nomination.

The “Manif pour tous” has called for major demonstrations on October 5 in Paris and Bordeaux against surrogate motherhood; as of today the watchword has been extended to gender ideology and “familyphobia.”