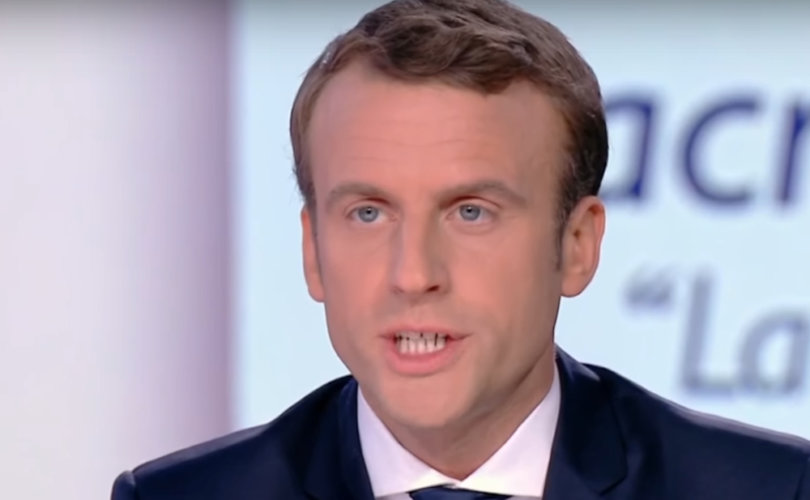 NICE, France, October 30, 2020 (LifeSiteNews) — After the murder of three Catholics during an Islamic attack in a church in Nice, French President Emmanuel Macron highlighted the specifically anti-Catholic nature of this event and others like it in recent years.

The president was speaking in light of the attack in which a young Tunisian Muslim, Brahim Aouissaoui, entered the Basilica of Our Lady of the Assumption and stabbed and decapitated three people inside the church.

Addressing the press who had gathered outside the basilica, Macron said, “I want to express, first and foremost, the nation’s support for the Catholics of France and elsewhere.”

He went on to compare the attack with the 2016 murder of Fr. Jacques Hamel, who was killed by two Islamic State terrorists. “After 2016, with the killing of Father Hamel, it is the Catholics of our country attacked once more, and just before All Saints’ Day,” Macron said. “We are at their side in order that religion can be freely exercised in our country.”

“People can believe or not believe, all religions can be practiced, but today the nation is beside our Catholic compatriots,” the president continued.

The French president’s words came as welcome support for Catholics in France but were also a surprise since Macron is a strong proponent of abortion, homosexuality, and gender ideology. He recently complained, for instance, that abortion was not yet popular enough.

Speaking at a virtual General Assembly of the U.N., he said, “Everywhere, women’s rights are under attack, starting with the freedom for women to control their own bodies, and in particular the right to abortion.”

Macron asked to be baptized as a Catholic at the age of 12, but today identifies as agnostic.

Recently, Macron announced his intention to ban homeschooling, only excepting those with a health condition that would force them to stay away from school.

Macron proposed the law as part of a plan to tackle “radical Islamists,” but “instead of pledging to track down and overpower historically violent, radical Islam … he is targeting homeschooling and independent schools that many Catholics have turned to,” as Jeanne Smits, LifeSite’s Paris correspondent, commented.

After yesterday’s attack in Nice, Cardinal Robert Sarah tweeted, “Islamism is a monstrous fanaticism that must be fought with strength and determination. It will not put an end to its was. We Africans sadly know that only too well. Barbarians are always the enemies of peace. The West, today that means France, must understand this. Let us pray.”

Archbishop Michel Aupetit of Paris said that “we are stunned by this murderous madness in the name of God.” The archbishop noted, “From the beginning, Christians have been persecuted and even today it is they who, although they preach and live on the love of God and of neighbor together, pay the heaviest price for hatred and barbarism.”

Bishop Manuel Linda of Porto, the second largest city in Portugal, presented a different interpretation of the attack, saying it “is not Islam’s fight against Christianity: it is the result of the prejudices of those Europeans who not only do not foster intercultural and inter-religious dialogue, but are always at the ready to accuse religions.”

Bishop Linda previously stated that divorced and “remarried” couples had to engage in sexual intercourse in order to be deemed a proper family.

Despite Macron’s statement calling for the free exercise of religion in the country, churches in France will be closed for public Masses as part of the new lockdown restrictions beginning Monday.

In the first national lockdown earlier in the year, churches had been ordered closed, but as a result of a legal challenge by a group of traditional religious communities, the French Council of State declared that the right to attend public Mass in a church “is an essential component of the freedom of worship” and prohibiting this was “a grave and manifestly illegal violation.”

At the time of writing, reports just broke of an attempted stabbing in Paris. Police arrested a Muslim man after he tried to murder a policeman earlier today. The man was carrying two knives.

Meanwhile, Muslims have gathered outside the French embassy in London, shouting “Allahu Akhbar,” “respect Islam,” and holding placards saying, “Islam is the religion of love and peace.”

Police were called to the scene to disband the protestors after they “failed to provide the local authority with a sufficient risk assessment.”