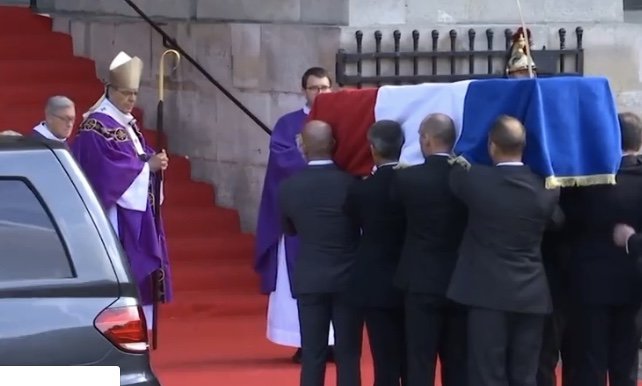 September 30, 2019 (LifeSiteNews) – Former French President Jacques Chirac, the man who as Prime Minister signed France’s abortion law in 1975, has died at age 86 and received official honors from the French Catholic hierarchy in an official ceremony that took place in Saint-Sulpice, the church being used as a cathedral while Notre-Dame is closed for restoration.

Pope Francis sent an official note of condolences to President Emmanuel Macron, as is customary in these circumstances.

The French bishops’ conference went a step further, adding more personal compliments to the diplomatically inevitable words of sympathy and hope that they must address on the occasion of a former head of state’s death. Its official statement proclaimed:

“President Jacques Chirac left his mark on the French people through his energy, his taste for human contacts, his ability to face adversity. Beyond his political record, throughout his lengthy career, he embodied in a singular fashion a certain French attitude in facing the challenges of the economic crisis, the transformation of the world before and after 1989 in Europe and on other continents, and societal changes made possible and necessary because of technical evolution.

“The French Bishops’ conference will be united to the funeral service of president Chirac, willingly joining his dear ones and all French people in order to commemorate his generous service to his country and to confide him to the light of the God of mercy who sees deep into man’s heart.”

For Catholics in France who are attached to the social and moral teachings of the Church, this was a slap in the face. Chirac’s name will forever be attached with the legalization of abortion, immigrationist measures, the personal and efficacious rejection of having Europe’s Christian roots written into the European constitution, collaboration with socialist politicians, and policies that have left France with a seemingly unsolvable unemployment problem.

As to speaking positively of his energy and his taste for human contacts – and it is true that Chirac had a warm personality, enjoying his talks with the “common people” – the double meaning in those words cannot have escaped the French. A compulsive womanizer, Chirac was commonly nicknamed “Five Minutes, Shower Included.” Unfortunately, the vulgarity of the words describe his reputation.

Chirac was born Catholic but at the beginning of his youthful political career is known to have sold communist papers in the streets. He made his way up in the so-called “center-right” parties, developing a vigorously anti-European Union rhetoric that won him much sympathy in those quarters. When it came to real life, however, he favored the EU with all his might as a prime minister and later as president of the Republic from 1995 to 2007. He gained his second seven-year term thanks to finding himself alone against demonized Jean-Marie Le Pen in 2002, winning the election with more than 80 percent of the vote in the second round.

It was in Chirac’s capacity of prime minister to Valéry Giscard d’Estaing in 1975 that he supported and personally signed the so-called “loi Veil” allowing abortion in France up to eight weeks of gestation under purportedly limited circumstances, but those limits were never imposed. Since then, France has yearly lost between 180,000 and 230,000 of its tiniest citizens to the legal massacre.

This direct cooperation with the evil of abortion objectively led to the automatic excommunication of Chirac, but that point seems to have been widely forgotten, even by the French bishops. He never expressed public regret and was at the end of his life a victim of a neurodegenerative disease that would have prevented him from doing so if he would have wanted to.

Chirac was also president of the republic in 2001 when elections had put socialists in government under the prime-ministership of Martine Aubry, and as such he signed the law legalizing abortion up to 10 weeks of gestation (12 weeks’ pregnancy), the possibility of abortion without parental consent for minors, and obliging doctors with conscientious objections to refer patients demanding abortion to a more complacent colleague. The same law authorized “medical” abortion up to term and did away with the ban on publicity for abortion. At the same time, it set up penalties sanctioning “obstruction” to abortion within abortion units as well as “moral and psychological pressure” on women to dissuade them from aborting.

The same law included several measures promoting contraception and the morning-after pill, including its distribution to minors in state schools, and allowing for voluntary “contraceptive sterilization” for adult women.

Chirac made himself known as an extreme supporter of secularism, going so far as to say: “No to a moral law that would supersede civil law.” This is the plain and overt negation of the existence of natural law or any moral requirement not expressed by a democratically adopted positive law.

France’s abortion laws have allowed the legal killing of more than eight million unborn babies since 1975.

All of this did not prevent Paris Archbishop Michel Aupetit from giving a positive homily at Chirac’s funeral Mass.

“President Jacques Chirac focused his 1995 campaign on the theme of the social divide, thus focusing on those who remain by the roadside,” the archbishop said. “The social divide is an evil that is probably difficult to treat because, even today, some people still feel excluded.

“One of the roles of the Church is to build fraternity, the fraternity which is one of the three pillars of our Republic and which makes it possible to build true unity among us. This fraternity is obvious to Christians since it refers to the one Fatherhood of God. It is in the name of this Fatherhood that God, from the beginning of fractured humanity, asked Cain who had just killed his brother Abel: ‘What have you done with your brother?’”

“Attention to the smallest, the weakest, the forgotten is a characteristic of Christianity,” the archbishop said. “We heard it in this gospel chosen by the family: ‘I was hungry, you gave me food; I was thirsty, you gave me drink; I was naked and you dressed me; I was a stranger, you took me in; I was sick and you visited me; I was in prison and you came to me.’”

He added, speaking of Chirac’s love for his daughter, Laurence, who suffered from mental anorexia:

“This attention to the weakest has an even deeper reason than the delicacy of affection. Jesus said, ‘What you do to the least of my children, you do to me. It is because of the divine spark that resides in our humanity that every person, from the beginning of his life at conception, until his natural death, is called to be loved and respected. This forces us to change our perspective, which must go far beyond the appearances and postures that characterize our human societies. God sees the depths of hearts, it is appropriate to follow His teaching. Indeed, the actions we take towards a brother in humanity go far beyond the environment and the social and political dimension, because they pass through Christ and, through him, reach others to the ends of the earth.”

Was this meant as a sort of pique against the deceased president’s disastrous records? It is possible. But experience proves that subtlety and irony are rarely understood on the part of public speakers.

“‘To govern is to foresee:’ this famous quote from Émile de Girardin was illustrated several times by President Jacques Chirac. In September 2002, at the Earth Summit, before today’s strong ecological awareness, he said, ‘Our house is burning and we are looking elsewhere.’”

Aupetit concluded his homily by saying the funeral Mass celebrated at the request of Chirac’s family had a clear objective: “To present this man to the Mercy of God.”

But that does not take away the objective scandal of a public Catholic funeral for a man who so deliberately chose to violate God’s law at the level of the state.