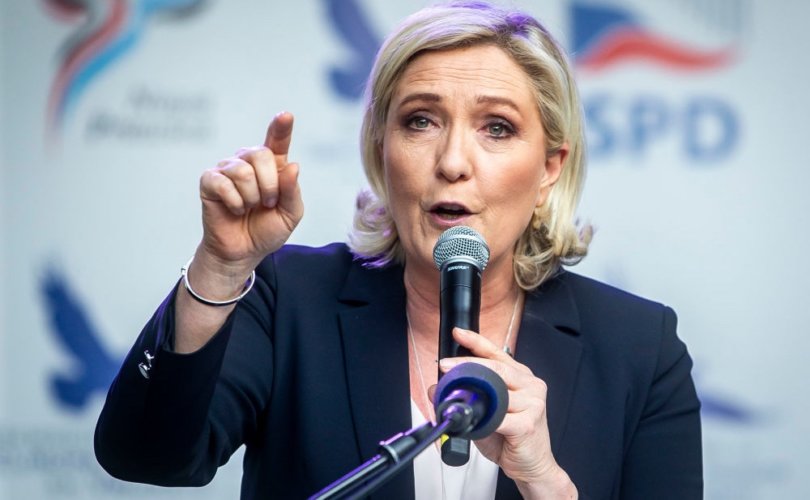 PARIS, France (LifeSiteNews) — French politician and presidential candidate Marine Le Pen has described the vaccine passport as a ‘useless’ and ‘disproportionate’ constraint on the French people and has vowed to lift it should she become president.

Le Pen made the comments today in a wide-ranging interview with French radio channel France Inter in which she severely criticized some of the COVID measures currently in place in France.

“What is the vaccine passport for, apart from imposing a useless and disproportionate constraint on the French people?” she asked.

Le Pen called for “vaccine-freedom,” arguing that it seemed especially appropriate “when you realize that the vaccine does not prevent you from getting COVID or from contaminating others.”

“I think we have a good example at the top here,” she said.

Le Pen was referring to the fact that French Prime Minister Jean Castex tested positive for COVID-19 yesterday despite being double jabbed.

“The real question is: can the vaccine prevent the spread of the virus? I think today the answer is no,” she said.

Salamé then asked Le Pen if she was for or against third COVID vaccine doses, or “boosters” for everyone.

“I don’t have to be for or against it. I think everyone has to be free to do it or not, since in reality, it’s only your own life which is at stake,” replied Le Pen.

“Everyone has to determine the risks and benefits for themselves.”

Salamé then argued that when people were free to choose, there was no mass movement toward vaccination among the French people, “whereas when [French President] Emmanuel Macron said on July 12 that people would need a vaccine passport, everyone rushed to get vaccinated.”

“Should there not be a constraint for the sake of public health?” asked Salamé.

She then argued that the French people have lost trust in their government and believe they were lied to about COVID-19 vaccines and other aspects of the pandemic.

“[The government] said the most absurd things,” Le Pen said.

“Only this morning I heard a replay of Mr. Castex explaining that the vaccine was going to prevent people from catching COVID and spreading it to other people,” she recalled.

Le Pen insisted that the coercive approach taken by the Macron administration is useless. She added that everyone “will have to learn to live with this virus.”

“Nothing, it seems, can stop the spread of this virus, so all these constraints are meaningless,” she stressed.

When asked by Salamé what she would do were she in power, Le Pen, a candidate at the next French presidential election in 2022, said she would lift all “senseless restrictions,” particularly the suspension of healthcare professionals who aren’t vaccinated.

“The suspension of healthcare professionals is useless, [and] we need them,” she said before denouncing the French government’s handling of the COVID crisis.

“Hospitals are the main problem,” she said.

“It’s the government’s responsibility [to ensure there are enough hospital beds]…. [T]hey’ve removed beds [and] have allowed hospitals to become medical deserts with 30% of posts now vacant,” she continued.

“For the rest, we remove all of these constraints which are obviously useless.”

— Article continues below Petition —
HELP AUSTRALIANS restore their freedom by protesting outside YOUR Australian Embassy - Dec. 4th - US
Show Petition Text
7063 have signed the petition.
Let's get to 7500!
Thank you for signing this petition!
Add your signature:
Show Petition Text

At the end of the interview, Le Pen was asked to comment on an investigation by the French investigative journal, Mediapart, which accused a prominent French doctor, Professor Didier Raoult, of falsifying information to promote the efficacy of hydroxychloroquine against COVID-19.

“Only you people would ever take a Mediapart investigation at face value,” Le Pen replied.

“I for one have no trust in their investigations; I know how they’re done.”

The politician added that Raoult was “the victim of an incredible cabal, when he all he asked for was freedom of prescription for doctors.”

“As it so happens, I believe in freedom of prescription too,” she said.

Le Pen concluded her interview by accusing the French medical elite of persecuting Raoult while sending dozens of doctors on TV to tell the public “absurdities as big as themselves only to be contradicted by the facts a few weeks or months later.”