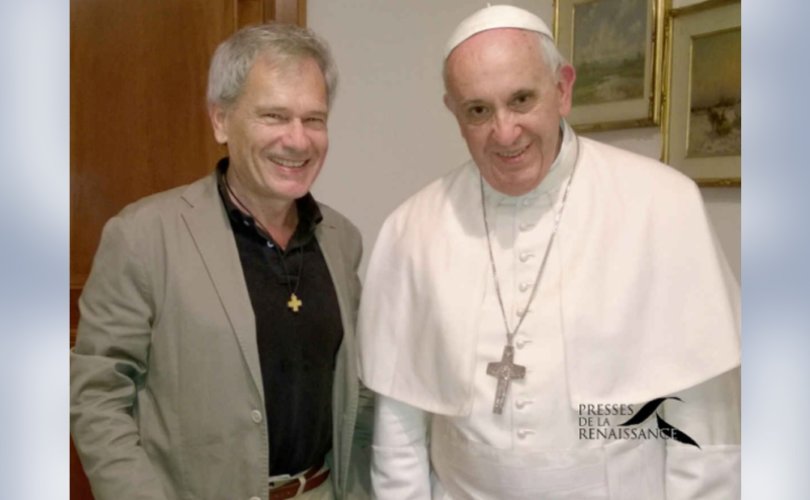 Father Daniel Duigou, priest of the Church Saint-Merry in Paris, France, is a late vocation and a former journalist who holds progressive views. According to a recent interview he gave to the international news service Konbini News, he just published an Open Letter to Pope Francis (Lettre Ouverte d'un Curé au Pape François) in the form of a book in which he calls for a “reinvention” of the Church and for a removal of the “monopoly” of the role of the priests in the Church.

In the interview, Duigou said that he had a 45-minute personal meeting with Pope Francis. The photo on the cover of his book released this month supports his claim of the private meeting.

“The first question he [the pope] asked me was: 'Do you bless divorced and remarried couples?' which is one of the big questions today in the Church,” explained Duigou. He recalled responding, “I listen and I bless, and I also bless homosexual couples.”

The news show host asked incredulously: “Well, does this mean that the Pope is in favor of blessing homosexual couples?”

The French priest responded: “Yes, absolutely. It is not about marrying them.”

When asked whether this is the official position of the Church, Father Duigou responded that it is the position the Pope put forward during an inflight interview.

Duigou may have been referring to the Pope's famous “Who am I to Judge” made on a 2013 flight.

But he also could have been referring to a 2016 interview during the Pope's return flight from his visit to Georgia and Azerbaijan. The Pope told reporters that he had invited a homosexual couple to visit him in the Vatican. Pope Francis referred to a woman who “felt like a man” but “was physically a young woman.” After a sex-change surgery in her twenties, Pope Francis said, “he got married.” Referring to the woman who mutilated herself and took hormones to appear like a man, the Pope said, “He wrote me a letter saying that, for him, it would be a consolation to come [see me] with his wife. I received them and they were very happy.”

Later in the interview, the French priest said that it was probable that in the future there will be married men who will be priests as well as women priests. He responded with “But of course,” when asked if there will be married priests. And addressing women priests he said: “Why won't we ordain tomorrow or in two days women? This would be an extraordinary sign on the side of the Church.”

Duigou, when asked how he would respond to such a claim, replied: “I would say that he lives in the 19th century, and not in the 21st.” Duigou said the Church is engaged in an evolution that one should not fear. “One has to open oneself,” he added.

When asked whether he is concerned about the fact that there are less and less church-goers on Sundays, the priest answered: “In some ways, that reassures me,” because it is “a free act,” and not anymore done out of social pressure.

The French traditionalist Catholic website Riposte Catholique, which reported on this interview, titled its report: “How can Father Duigou remain a priest?”

LifeSiteNews reached out to Vatican press office director Greg Burke, asking him for comment and for a possible denial of the claims made by Father Duigou. No response was given.