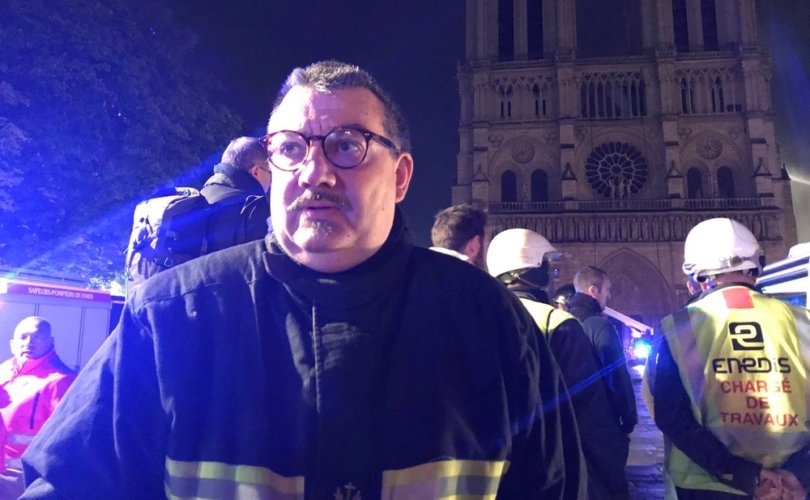 PARIS, April 18, 2019 (LifeSiteNews) — While the fire was raging on the roof of Notre Dame on Monday evening, heroic firefighters were in the building, trying to salvage as many treasures as possible. The biggest of these treasures was unknown to most: the Blessed Sacrament kept in two tabernacles of the Cathedral.

Fr. Jean-Marc Fournier, chaplain of the firefighters of Paris – the élite army corps of the “Pompiers de Paris” – told Catholic weekly Famille chrétienne how he personally recovered the contents of one of those tabernacles and blessed the burning church with the consecrated hosts. It was precisely at that moment that the fire in one of the two towers of the façade broke out … and was mercifully extinguished.

When Notre Dame started burning, Fr. Fournier was at the Arc de Triomphe with the military chaplains of France to pay homage to their heroic predecessors. Each year, they join their bishop on Monday of Holy Week for the ceremony. When it was over, Fr. Fournier returned to his car to drive over to the Ecole Militaire, where Bishop Antoine de Romanet was expecting all the chaplains for dinner. That is when he saw black clouds of smoke coming from the center of Paris. Switching on his cell phone, he found dozens of messages telling him the cathedral was on fire. He immediately headed to Notre Dame.

Bishop Michel Aupetit, cathedral rector Msgr. Patrick  Chauvet, President Emmanuel Macron and Prime Minister Edouard Philippe were together at the command post. For the religious present, the priorities were obvious: Every effort had to be made to save the relics of the Passion of Christ and the Blessed Sacrament.

Incredibly at that moment, nobody could tell them where to find the access code key to the reliquary containing the holy crown of thorns. A plan was in operation in order to salvage the cathedral’s treasures following a pre-established order and many firefighters were already inside.

Was there a feeling of panic?

“Not at all. No one panics. Never!” Fr. Fournier said. “There is simply a bit more stress than usual because we know time is playing against us. That sort of stress is good because it allows you to make on-the-spot decisions.

“At one point, the sacristan gave us a set of keys together with the pass to the Cathedral. When we entered, we understood that while we were searching, another part of the team had decided to smash the reliquary from which they salvaged the fake presentation crown made of gold. Other firefighters had found a steward who gave them the code to the safe where the crown itself is kept. He opened it and took out the crown of thorns. The first objective was fulfilled.”

But the Blessed Sacrament was still in the burning building:

“When I entered into the cathedral, the spire had already collapsed,” Fr. Fournier recounted.”At any moment, the nave could cave in. There were two braziers on the floor: one in front of the main altar, the other in front of the high altar, in the canons choir. A rain of fire was falling without pause from the roof.

“Inside the cathedral, the atmosphere was very special. There was no smoke, no excessive heat. We were moving forward, hugging the walls. I turned to the steward to ask him whether there were other treasures to save. He told me to retrieve a Virgin with Child in the second lateral chapel. Together with the sergeant major, we moved over to the chapel and retrieved this large painting.”

From that moment on, the priest and the officers of the “Pompiers” decided to “rationalize” their actions. The sergeant major had a powerful torch, Fr. Fournier – a veteran Army chaplain with experience of theaters of operation such as Afghanistan – had the technical expertise, and a dozen men were ready to convey the artworks.

They moved from one chapel to the other, with Fr. Fournier deciding which treasures needed to be salvaged first. One after the other, they were carried out and kept under police protection. When salvaging was impossible, covers were installed to protect the artifacts from the water. But as they progressed, the situation became more and more dangerous. An officer told them they had to stop.

Up to that point, they had already cheerfully risked their lives at every step. “That's what we do every time we enter into a burning building. And it's not an impression. It's a reality!” Fr. Fournier recalled.

But it was “time to get Jesus out of this burning cathedral,” he added. “The sacristan told me that the Real Presence resides in two distinct places. The first is the altar of the canons, where several thousand (consecrated) wafers are kept. The problem was that this altar was behind the place where an entanglement of beams was burning on the floor, while drops of molten lead kept falling. It was absolutely impossible to reach. I decided nothing could be done, to my regret, about this reserve (which probably remained untouched, according to Famille chrétienne).

“A second reserve was situated at the altar of St. George. We found the keys. I retrieved Jesus. And with the Blessed Sacrament, I blessed the Cathedral. It was an act of faith. I asked Jesus – Who I believe is truly present in the hosts – to fight the flames and to preserve the building dedicated to His Mother. The benediction coincided with the beginning of the fire in the north tower – and also with its extinction! This was surely Providence … The two bell towers were saved.”

Fr. Fournier left the “Real Presence” in the sacristy that was not threatened by the fire, no more than the treasure rooms. Both spaces were continually sprayed with fire hoses from the start in order to keep them safe.

Having done all that he could, the chaplain of the firefighters went up into the South Tower. From there, he saw that the roof of Notre Dame was gone. At that moment, he thought of Ash Wednesday: “Remember you are dust and you will return to dust.”

“The condition of ashes is way closely linked to our humanity,” he said. “But it is also necessary in view of the Resurrection. At the same time, I had this great sadness because of the loss of an extraordinary artifact, the forest that was the frame of the Cathedral roof, and the unspeakable joy that is attached to hope in the Resurrection.”

Before joining the French army as a chaplain in 2007, Fr. Fournier, 50, was formed at Wigratzbad, the seminary of the Fraternity of Saint Peter whose priests offer the Mass in the ancient Latin rite.

He was also present at the Bataclan terrorist attack in Paris in 2015, where he entered the theater while the Islamist terrorists were still shooting in order to help evacuate the injured and pray for the living and the dead.

Jean-Marc Fournier is a Knight of the Holy Sepulchre and he carried the crown of thorns for the veneration ceremony described here by LifeSite every Good Friday.