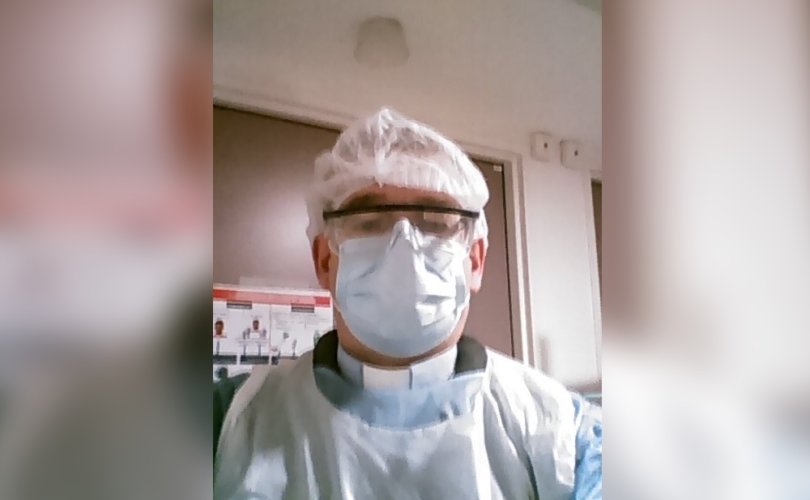 FRANCE, April 1, 2020 (LifeSiteNews) – On Sunday, a widely shared message and a photo on the Twitter account of a Parisian priest became a symbol of hope. Father Franck Derville, hospital chaplain of one of the foremost hospitals in Paris, Hôpital Cochin, visited COVID-19 patients in the ICU ward. He posted a picture of himself wearing protective garb over his Roman collar as well as a mask and glasses.

At a time when most religious celebrations have been closed to the public, visits of religious ministers to the sick and to patients in end-of-life situations have been expressly authorized by confinement rules in France. But not all hospitals authorize them.

All visits have been suspended in hospital homes for the elderly, whose vulnerable inhabitants are paying a heavy tribute to the coronavirus which is particularly deadly for the elderly.

In an op-ed published on March 26 by FigaroVox, the web media of Le Figaro, Bishop Benoît de Sinety, vicar general of the Diocese of Paris, insisted that chaplains should be allowed to visit the sick at their bedside.

While television crews are sometimes allowed to enter hospital emergency departments to follow the remarkable work of medical teams, in a commendable concern for providing information, it seems to me at least as crucial that chaplains should be able to be present with the dying and the sick, for the sake of humaneness, to be with them at such essential times.

At a time of great urgency and when our society as a whole is holding its breath in the face of the spread of this epidemic, I earnestly request that this fundamental right to be a human being up to the end of one's life be respected.

May those who so desire, or whose families manifest this desire, be able to benefit from the presence of the minister of their religion at their side to pray with them and for them, to hold their hands, and not to let them die without the benefit of any spiritual guidance they may want.

Not going to the bedside of the dying is tantamount to leaving the way clear for a form of abandonment.

If it is necessary for those who voluntarily carry out this mission to agree to go there for the necessary time, I know that this will not discourage them. They will also be able to provide listening and a supportive presence that many doctors, interns, nurses and care staff are also asking for.

The demand for efficiency and the exceptional dedication of medical teams cannot justify denying what is the hallmark of a civilization. Not going to the bedside of the dying is tantamount to leaving the field open to a form of abandonment that is not only human but also spiritual, which, apart from the fact that it encourages patients to do everything they can to escape the hospital for fear of suffering this fate, would permanently damage the soul of our health care system and, more broadly, of our country.

Already, outside of hospitals, volunteer teams of followers of different religions are listening, consoling and accompanying families who are distressed at not being able to say goodbye to their loved ones, and providing support that contributes to the common good.

Let us not forget that, at all times, during much more dangerous epidemics (cholera, plague…) men and women have never been prevented from volunteering to support their contemporaries spiritually and humanely and from freely taking risks.

As long as they agree to follow the instructions given, why deprive the most fragile of the benefits of a fraternal presence where science can no longer do anything?

Benoist de Sinety’s op-ed was also published on the website of the Diocese of Paris.

His arguments were echoed by Bishop Bernard Ginoux of Montauban, who tweeted: “We, priests, cannot abandon the sick, especially those who have reached the end of their life. It is a right of the sick person to obtain the presence of Christ.”

While asking his readers not to vainly accuse parishes and priests who are “doing what they can,” he also tweeted: “We are called to penance and conversion, to humility and to the adoration of our only Lord. Now is the real time of favor.”

Bishop Ginoux added a tweet today saying that Masses are still being celebrated in his diocese “according to the norms allowing churches to be open.”

Meanwhile, Bishop Marc Aillet of Bayonne has called on his flock to “pray and do penance,” and has consecrated his diocese to the Sacred Heart and to the Immaculate Heart of Mary.

Official guidelines still allow churches and other places of worship to remain open. Believers were in theory allowed to attend religious ceremonies in their place of worship with no more than 20 faithful present, as the government’s website still states, but a new decree published on March 23 formally prohibited all religious ceremonies except for funerals, these being limited to 20 persons present.

The decree runs until April 15, which means that for the first time since the 1st century, there will be no public Mass in France for Easter.

At the beginning of confinement on March 16 a number of churches, such as chapels of the Society of Saint Pius X and other traditionally-minded parishes offered an increased number of Masses, allowing faithful to join upon inscription or by rotations managed by the local priest. Others scrapped Sunday Masses but retained weekday celebrations so that the faithful could at least have one Mass during the week; some distributed Holy Communion and others did not.

Increasingly stringent controls included 16 faithful being fined on March 22 and asked to leave a chapel of the FSSPX in Savoie (eastern France) because they were “too close together” and because a number had come from “too far.”

In another incident that day, a priest was officially “reminded of the law” while his less than twenty faithful were fined 135 euro each (about $150 USD) for having joined a Mass organized in a large hall at a private camp. Police explained that the hall was not a “place of worship.”

Since Saturday, automatic fines for second-time offenders were stepped up to 200 euro, while four infringements in 30 days will “cost” 3.750 euro and six months imprisonment.

Banks, supermarkets, garages, all food stores including take-away restaurants, bakers and butchers, as well as computer stores, phone shops, newspaper sellers, drugstores and drycleaners, to name but a few, are open.