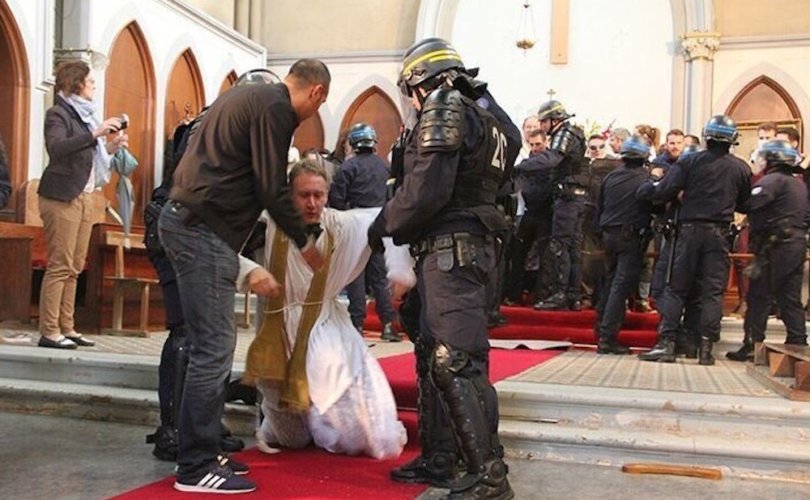 PARIS, France, August 5, 2016 (LifeSiteNews) — The Parisian church of Saint-Rita was evacuated by force on Wednesday morning by riot police while the traditional Mass was being celebrated.

Law enforcement stormed the building after having broken down the doors in order to evict everyone inside and remove the furnishings in application of an administrative order obtained by the property developer who intends to take down the century-old church to build apartments.

Photos of the evacuation were circulated widely on social networks. They showed a young priest, Father Jean-Francois Billot, being dragged bodily to the altar steps by riot police while the celebrant, Father Guillaume de Tanoüarn, who had not finished the consecration, quickly consumed the Host in order to avoid desecration. He was escorted out of the building in full traditional vestments.

The priests and the faithful offered no resistance to the “legal violence” – as they called it – of the police force, despite the firing of teargas into the closed building by the CRS, or Compagnies républicaines de sécurité, who are in charge of crowd control and potentially tense demonstrations. The use of teargas by police in a confined space is illegal.

The police action took place just a week after a Catholic priest was murdered by Islamic terrorists while celebrating Mass in Saint-Etienne-du-Rouvray, a suburb of Rouen in the north of France, in the presence of a handful of nuns and parishioners. The evacuation could hardly have come at a worse time as France remains in shock over the brutal attack on Father Jacques Hamel.

A series of spectacular attacks perpetrated by radical Muslims has cast a chilling shadow over the country since the beginning of 2015, when a young female student was knifed in Rennes while waiting for a bus to the latest 85 victims who died in Nice when an Islamic radical used a semi-trailer as a deadly weapon. Many of the attackers were known to police as radicalized Muslims.

The evacuation also was carried out at a moment when Muslim communities in France are increasingly obtaining land and buildings in order to build mosques while many churches stand empty, especially in the countryside. There are 312 churches, including 14 in Paris, currently under the threat of destruction either because local authorities are the legal owners of most churches in France and the law of separation of church and state says they cannot afford to maintain the buildings, or because selling the property is more lucrative.

The symbolism is clear: The evacuation by the police force of a church, where Mass is said daily to keep it from being destroyed while mosques are springing up all over the country, is a sign of the decline of what is left of French Christendom.

The church of Saint-Rita is of no exceptional architectural value, but it marks the visible presence of God in the city. The neo-Gothic building, standing on an enclave in the grounds of an annex of the UNESCO in a quiet part of southern Paris, dates to the beginning of the 20th century. The church was originally built for a non-Catholic Christian group that was separated from Rome but celebrated Mass in its traditional form by a Society of the “Catholic Apostolic Church,” originally an Anglican group. The church was rented from 1987 until the end of 2015 by another breakaway Christian group, the “Gallicans.” Unpaid rent led to the end of the contract and the building was put up for sale.

With the support of the local mayor, Philippe Goujon, of the 15th arrondissement of Paris, and answering the call of faithful Christians who wanted the building to preserve its religious character, Father de Tanoüarn decided to say Mass in the church on a regular basis while the building itself was occupied by young anti-liberal activists.

Father de Tanoüarn and Father Billot are members of the Institute of the Good Shepherd (Institut du Bon Pasteur), which was officially recognized by the Congregation for the Clergy in Rome in 2006, obtaining the right to celebrate the Tridentine Mass exclusively.

Since the end of 2015, one and then two dominical Masses took place every week at Saint-Rita, after Father de Tanoüarn had formally blessed the building in order to use it for the Catholic liturgy, and attendance rose from a few dozen to more than 200.

Lawsuits are in progress to determine whether the religious building could legally be pulled down. Several decisions were favorable to the Catholic community, but a recent emergency procedure at the highest administrative level allowed the use of force to evacuate Saint-Rita.

The authorities chose the first week of August, when most Parisians are away from the capital, to organize the police intervention. Mayor Goujon was informed at 9 p.m. Tuesday. He immediately gave the alert and Father de Tanoüarn decided to try to protect Saint-Rita and pray for the church. He invited the faithful to come for Mass at 6 a.m. Wednesday. More than 80 people, including altar boys, answered the call. Three Masses were said successively while waiting for the police.

Later in the day, on his blog, Father de Tanoüarn called for talks to take place between the building's owner and the real-estate developer but also the mayor and the Catholic community in order to determine whether Saint-Rita should be destroyed in order to make council flats and parking lots or “remain what it has always been, a Temple of the Holy Spirit, where all can find God who lets Himself be sought, in particular in the splendor of the traditional liturgy.”