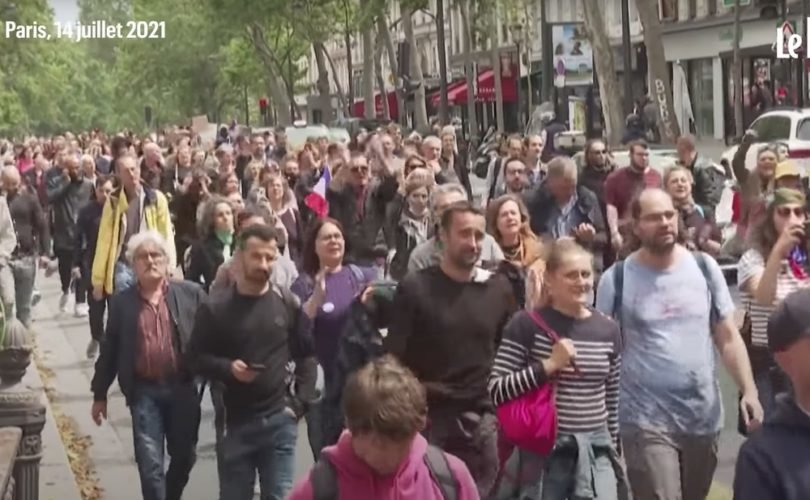 According to official figures nearly 20,000 demonstrated against what many are calling “a sanitary dictatorship.” And everywhere, the same slogan could be heard: “Liberté!” (“Freedom!”) The official figures for the number of people who protested are likely underestimated, as is generally the case for protests against government policies.

The decisions announced by President Macron on Monday included:

Since the announcement, Macron has received criticism from a number of French politicians who have accused him of blatantly contradicting himself. Indeed, back in December of 2020 the French President had stated in an interview with French online news site Brut:

I do not believe in mandatory vaccination for this particular vaccine. First of all, let’s be honest here, we do not know everything about this vaccine yet (…) And I believe much more in persuasion through transparency than in coercion.

In his statement on Monday, Macron reiterated: “Vaccination is not yet mandatory for everyone”.

But the very measures he announced appear to contradict that statement, as non-vaccinated people will soon be refused access to even the most basic public venues if they fail to produce a sanitary pass upon entry. And workers of some professions, such as healthcare workers, who refuse to get vaccinated before September 15 even risk losing their livelihoods.

— Article continues below Petition —
PETITION: No to mandatory vaccination for the coronavirus
Show Petition Text
1081694 have signed the petition.
Let's get to 1100000!
Thank you for signing this petition!
Add your signature:
Show Petition Text

Reactions from the French public were initially mixed following the President’s announcement.

On Monday evening, huge numbers rushed to book vaccination appointments using the app “Tousanticovid” (“All against covid”). Unable to cope with the sudden volume of connections, the app quickly became saturated and crashed.

On Tuesday, queues formed quickly in front of vaccination centres in many French cities; some people explained there that they had previously no intention to receive the vaccine but now felt obliged to do so, like Christophe, 47 who told French newspaper Le Parisien:

I came because I’m forced to. I was told this morning I didn’t have a choice. I was against taking the vaccine as I saw it as a violation of my freedom (…) I was going to refrain from going out, in bars and restaurants, but since I have to take the train to spend a holiday with my 3-year-old-daughter…

Others rushed to the web in search of ways to get false passes. On Monday evening the key words “fake sanitary pass” exploded on Google’s search engine and some are already being sold for up to 250 euros as French news channel RMC reported.

But on Wednesday, France’s national day, a wave of opposition washed over the country as demonstrators took to the streets of Paris and many other French cities. A total of 53 demonstrations took place throughout the whole of France according to the French Ministry of the Interior which brought the total number of protesters to nearly 20,000, including 1,900 in Toulouse, 1,400 in Lyon and Chambery, 1,200 in Bordeaux and Montpellier and 800 in Nantes and Annecy.

In Paris, thousands marched in the streets from place de la République to place de Clichy. The demonstrations started out peacefully but after instances of vandalism as well as a departure from the pre-planned route, Parisian police used tear-gas in some places to disperse the crowds.

On this symbolic day for France and Paris when 232 years ago Parisian rioters stormed the Bastille prison, an event which is commonly accepted as the starting point of the French Revolution, Parisians were heard shouting “Liberté!” (freedom!) or “On est pas des cobayes!” (“We are not guinea pigs!”)

Peoples of all backgrounds and lines of work were present at these protests and rallies to denounce the imposition of the sanitary pass in public places:

Cathy, one of those demonstrating yesterday, told Le Parisien:

I am against the sanitary pass because I think it is ridiculous to force people to get jabs so they can get a coffee somewhere or get on a train. This vaccine scares me because we have no perspective on it. We don’t know what’s in it, it’s not a real vaccine. Everyone can choose what they want to do but I don’t want to do it, and I don’t want to be coerced (…) I think it’s dictatorial.

One group whose presence at the demonstration was particularly noticeable were the healthcare workers who are directly threatened by this new decision:

“I work as a care assistant and I’ve decided not to get vaccinated because I think we don’t have enough perspective on this vaccine yet…” declared one of them to regional newspaper La Provence at a demonstration in the city of Avignon.

Some even said they were ready to quit their job as a way to show their opposition. That’s the case of Coralie, another healthcare worker who told French news channel RMC:

I have to get vaccinated before the September 15, but I’ve decided to resign, I will fight until the end.

Healthcare professionals have been at the front line of the COVID crisis since the beginning and are now the first ones at risk of losing their jobs following the President’s decision.