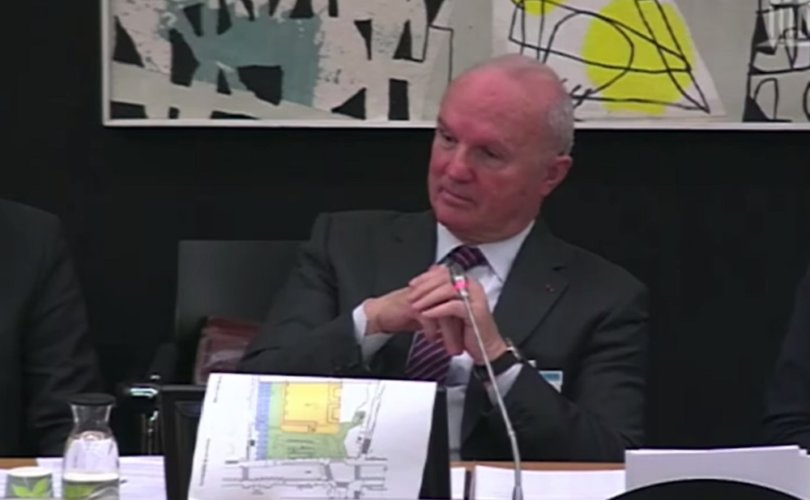 PARIS, November 15, 2019 (LifeSiteNews) — The chief architect of the French public organization for historical monuments has been ordered to “shut his big mouth” by the army general, Jean-Louis Georgelin, after he repeated last month that Notre Dame cathedral in Paris should be reconstructed as it was before the large fire that destroyed its roof and steeple in April this year.

Georgelin’s vulgar choice of words and visible hostility towards chief architect Pierre Villeneuve have reignited speculation and concern about the risk of a restoration that will include “contemporary arts” elements, as suggested by Macron one day after the tragic fire.

Georgelin was answering questions from the National Assembly cultural commission last Wednesday in Paris when he spoke these words, which have been widely condemned in France.

Several deputies to the National Assembly questioned him precisely about the “identical reconstruction” of the roof and spire of Notre Dame as they were before the fire. General Georgelin categorically refused to give a direct answer. One deputy quoted Pierre Villeneuve, who last month told RTL Radio: “Either I restore it identically … or they make a contemporary spire and it will be someone else [doing it].”

Speaking of the future spire, Georgelin answered that the question was being “wisely debated” and that answers would come “in due course,” suggesting that the decision would be made according to his guidance in his position as official representative of the French president.

He continued: “As to the chief architect of historical monuments that you quoted, I have already explained to him several times, and will do it even more directly, that he should shut his big mouth, and that we are advancing with wisdom so that we can serenely make the best choice for Notre Dame, for Paris, for the world.”

Georgelin was further questioned by Agnès Thill, a former member of the “République en Marche” presidential party, who was excluded from her political group because she opposed allowing access to artificial procreation for lesbian couples and single women.

Thill recalled the French laws and international treaties that make identical reconstruction the rule for damaged historical monuments, adding that recent polls have shown that the French are favorable to such identical reconstruction of Notre Dame. “I realize that you avoided the subject … but are you in a position to ensure that the restoration of Notre Dame de Paris will take place in full respect of its aspect before the fire?” she insisted.

“I have heard your question and consider that I have responded already,” answered Georgelin, adding that the restoration would be done “taking into account the historical, artistic, and architectural interest of the monument.” “At this stage, I will tell you nothing more, because wisdom commands to treat this with a great deal of calm, of serenity, without brusqueness, and to make sure that at the end of the process, we can be proud and happy of what we will have done. I regret not to tell you what you want to make me tell you,” he said.

What he quite definitely did not want to say was that France will respect its international commitments, in particular the Charter of Venice that obliges its signatories to restore historical monuments to their former state.

His attitude could only increase the fear that the Catholic cathedral of Notre Dame will be in some way defaced by secularist or Masonic symbols.

Georgelin was reportedly chosen by Macron as a conciliatory figure, in particular because he has the reputation of being a practicing Catholic. At 71, unmarried, he is known for his rough manners and direct speech, but even so, his putting down of Pierre Villeneuve, who has been working overtime for seven months to stabilize the situation of Notre Dame, which is still in a fragile condition, was condemned as “unacceptable” by the French culture minister, Franck Riester. “Respect is a cardinal virtue of our society,” tweeted the minister on Thursday.

Reports in the French press say Macron himself made clear on Thursday evening that he wanted all to “get back to work” on the restoration of the cathedral “with calm and respect for all.”

However, Georgelin, who plainly will accept no interference and intends to affirm his own leadership regarding the reconstruction of Notre Dame, is still in charge, and his refusal to give assurances regarding identical restoration has not been commented on or disclaimed.

Georgelin is known to be a member of the discreet and very influential circle of “Le Siècle,” where the political, media, and economic mainstream elites meet regularly.

His capacity to steer the reconstruction of Notre Dame has been questioned by members of all political persuasions of the cultural commission of the Senate, according to a statement by Senator Catherine Morin-Desailly. They consider Georgelin no longer to be in a situation in which he can manage the large number of stakeholders who have been asked to join forces to reconstruct “this jewel of our heritage” as soon as possible while respecting their various legal competences.

The senatorial commission has promised to control the public body that has been charged with the restoration of Notre Dame. In particular, they are asking questions about the said public body, whose creation has not yet been accompanied by the publication of the necessary decrees fixing its role and placing it under the supervision of the Ministry of Culture.