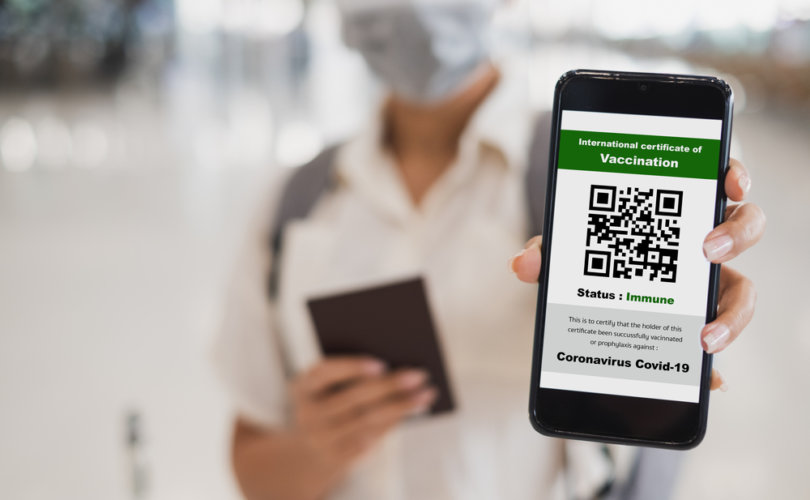 (LifeSiteNews) — Not even two months after the implementation of the vaccine passport in France, which requires full COVID vaccination (or recent recovery from the illness) for many ordinary activities including leisure, sports, cultural venues, cafés, restaurants and the like, a special report assessing the suitability of such a tool regarding the pandemic was presented last week to the French Senate’s commission for social affairs. Co-rapporteurs Chantal Deseyne (LR, center right), Olivier Henno (center) and Michelle Meunier (socialist) presented the 248-page document to their fellow senators who had failed to block the measure when it was presented to Parliament in January.

“At the end, the vaccine passport appears to be a mere gadget,” the report concluded.

While not going so far as to condemn vaccine passports in theory, the report did voice many criticisms and concluded it was high time to put an end to it.

This advice has not been followed to date by the French government, which has refused to follow the example of some neighboring countries that despite similar “case” and “COVID death” patterns have scrapped all or nearly all restrictions. Children aged 6 and up are still required to wear masks indoors at school, with devastating effects on their physical and mental health, and a mean loss of IQ of 21 points to date.

Italy is an exception, with its compulsory vaccination for those over 50 years old who may not even have a paid job if they did not get the jabs. But even Austria, which is lifting many restrictions by Saturday, is on the way to lifting a vaccine mandate it never got a chance to implement in practice.

In France, the vaccine passport could be “lifted” by mid-March but only if several conditions are met related to the virus’ circulation (specifically, the omicron variant whose symptoms are mostly benign), ICU bed occupancy and “normal” functioning of hospitals. This gives the authorities plenty of leverage to postpone the “lifting” of the vaccine pass or to reintroduce it later, as hospitals in France are often under stress and even more so now, when a number of nurses and other health sector workers have been sacked without benefits for having refused the COVID jab. Many expect the pass to be at least temporarily scrapped in the weeks running up to the presidential election in April.

Of course, Putin’s war in Ukraine has moved attention away from the virus, with a new fear project compounding two years’ worth of official scare-mongering. But the French Council of State, which is the highest judicial authority assessing administrative acts, today refused to order health minister Olivier Véran to lift the vaccine pass because there are still many “cases” of COVID, omitting to answer lawyer Fabrice Di Vizio’s legal arguments and ignoring the fact that COVID jabs do not reduce contagion. It also ignored the Senate’s report.

The said report was commissioned only one week after the Senate, including the majority of the center-right “Les Républicains,” had itself greenlighted most of the dispositions of the vaccine pass law. In a remarkably self-contradictory move, the “LR” senators explained that they did not want the government to have a free hand regarding the vaccine passport and began to wonder whether it would be useful or appropriate after having approved it.

The report underscores that the vaccine passport’s main objective was to push people into accepting the COVID jab, noting that between November 21, 2021, and January 16 (one week before the vaccine passport entered into effect), the proportion of the population having received at least one dose went from 77.6 percent to 79.8 percent. One month later, after 4 weeks of vaccine passports, it reached a mere 80.4 percent, mostly because of young people who are not at risk from the illness finally accepting the injection. This means that the passport failed to incite older and vulnerable people to be injected. One could add that this could have been foreseen (and probably was) because the very old and frail do not have lifestyles pushing them to accept an unwanted “vaccination” to buy their “freedom.”

The Senate’s special report noted that the government spouted contradictory messages, announcing the “progressive lifting of certain restrictions” as of early February on January 20, and at the same time making the vaccine pass compulsory from January 24. Nightclubs and discothèques reopened mid-February, but fast trains, café terraces and open air sports are still out of bounds for the unvaccinated.

Indeed, it became even more difficult to keep the passport: “On the same date, the government indicated that, as of 15 February, the deadline for the booster shot would be reduced from 7 to 4 months and that the validity of the certificate of recovery would be reduced from 6 to 4 months. The consequence of these shortened deadlines is that vaccine passes that were valid only because of a complete initial vaccination schedule or a certificate of recovery will expire more quickly,” stressed the report.

Despite a week’s respite for those who did not get their compulsory “booster” shot by mid-February, some 5 million people who received the two initial doses are estimated to have refused to go ahead in order to keep their passport, which is a sign that an increasing number of citizens prefer to do without leisure activities and many forms of social life rather than follow vaccine mandates.

The Senate report said that “while the sanitary pass and the vaccination pass restrict civil liberties and impose important constraints on the population, which are certainly justified to ensure health protection, it is necessary that the proportionality and usefulness of these measures can be assessed.”

“It appears that the health pass has not been subject to such an evaluation since its reinforced implementation in August 2021 … The assertion that the health pass has made it possible to limit the consequences of the epidemic on the health system is not supported by any study or evaluation of this tool,” the report remarked, adding that “neither the government nor the health agencies have put in place monitoring tools to evaluate the contribution of this tool to vaccination and the evolution of the epidemic.”

The government is also accused of having improperly made freedom-restricting decisions regarding COVID. “The contribution of expertise to decision-making, the monitoring of the health situation by means of exhaustive and available data, and the development of tools intended to evaluate the effects of the health pass and then the vaccine pass are largely insufficient,” according to the Senate report.

In France, such decisions were made by President Macron in secret “Health Defense Councils” whose debates and deliberations will remain confidential for at least 50 years.

The Senate report observed: “The threshold of 80 meetings of the Health Defense Council since the beginning of the pandemic was probably crossed at the beginning of 2022. Paradoxically, the General Secretariat for Defense and National Security stopped counting them in its latest activity report. The doctrine resulting from the 2008 White Paper on Defense had already expanded the notion of ‘national security’ to include protection against major crises and new technological, environmental and societal risks, and the terrorist attacks have increased the frequency of meetings of this body since 2015. However, using the Defense Council to combat an epidemic is unusual; no one thought of it during the ‘first pandemic of the 21st century,’ or even afterwards.”

That “first pandemic” was the H1N1 flu, which led to a major vaccine campaign that cost millions and was largely ignored by the French population. Another Senate report after that epidemic pointed out all the errors committed at the time in 2010: listening to the WHO’s recommendations and lobbying, ignoring pressure from the pharmaceutical industry and obvious conflicts of interest on the part of politicians handling the crisis, and the relegation of field-based medical workers, while “one-sided” experts guided government action. All these mistakes seem to have been repeated during the COVID crisis, independent observers underscore.

The present Senate report blasts the “discretionary power” given to a Defense Council that is “not even dependent on an organic law” and whose functioning outside the normal ministerial circuits is “opaque.”

“The substitution of the Defense Council for the Council of Ministers, and therefore the removal of the decision from the normal play of institutions, is justified only by the exceptional nature of the situation. But the exception has lasted for two years,” the Senate report complained.

In a final pique against the French government’s handling of the COVID crisis, the report recalled these damning statistics: “In January 2022, mental health indicators among young people remained at worrying levels: 43.4 percent of 18–24-year-olds reported an anxiety disorder, 22.5 percent a depressive disorder and 19.6 percent suicidal thoughts, compared with averages in the general population that are between 4 and 20 points lower.”