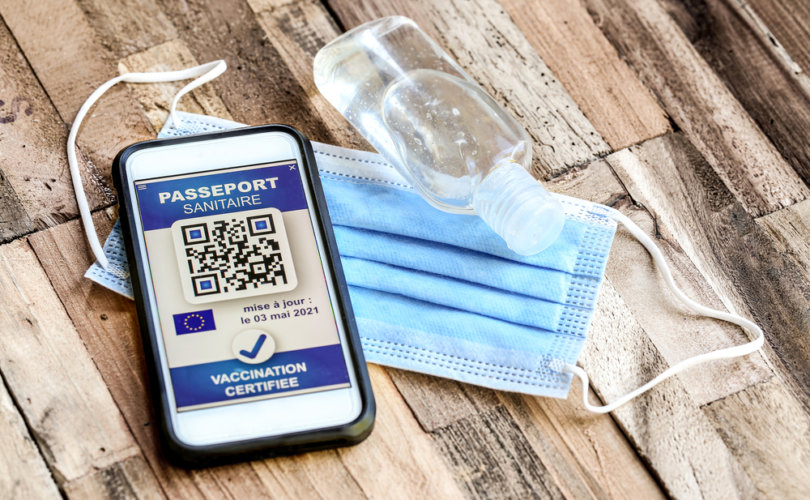 (LifeSiteNews) — The French executive is facing the beginnings of a rebellion on the part of the Senate that refused on Thursday to vote for a bill giving the government a free hand with the sanitary pass and other COVID restrictions until July 31, 2022.

In fact, a majority of senators (158 against 106, out of a total of 348) adopted a modified version of the very extreme bill approved by the National Assembly last week, rejecting a large number of measures the government is seeking to have at its fingertips without parliamentary control in the name of an extended “sanitary state of emergency.”

Given the narrow margin by which the law was adopted by the lower chamber last week (135 votes for, 125 against and several hundred absentees among the 577 members of the “Chamber of deputies”), the Senate’s resistance, however lukewarm, is a sign that Emmanuel Macron’s government’s prolonged frontal attack on public liberties is beginning to trigger reactions, even on the part of public institutions that have shown themselves so favorable to them since the “pandemic” began at the beginning of 2020.

Heated debates took place during which the mainstream center-right, centrists and the far left slammed the government’s plan to use restrictions such as the sanitary pass at will until well after France’s presidential election has taken place next April, as well as legislative elections in June. The socialist group abstained. Some senators voted against the bill because they thought it was still blocking freedoms that should be returned to the French people. The Senate decided not to scrap the pass altogether and put an end to the state of emergency that is due to expire on November 15, but to vote for their extension until February 28, that is the last day of the current parliamentary session.

Beyond that date, parliament will be in recess as is the unwritten rule when important political elections are scheduled to take place. This recess, given election dates in 2022, will last more than 4 months — the reason given by the government led by Jean Castex to prolong possible recourse to COVID restrictions without parliamentary control for more than eight months until July 31.

Center right senators including the “Les Républicains” leaders Bruno Retailleau and Philippe Bas insisted that such power should not be given to the executive. “Three months and a half is acceptable, eight months and a half is too much,” explained Bas who wants the government to let parliament assess possible extended COVID restrictions once again before deputies and senators leave for recess.

Even more interestingly, the senators accepted an amendment by socialist senator Marie-Pierre de La Gontrie that would result in the sanitary pass being lifted automatically by mid-November in mainland France. La Gontrie proposed to restrict its use to departments (the hundred or so administrative territories in France) where less than 80 percent of the eligible population have received the COVID experimental “vaccine” and where the virus is circulating “actively.” As things are evolving right now, this means the sanitary pass would be scrapped in the whole of mainland France on November 15.

The pass would only be required for visiting institutions for fragile people, such as homes for the elderly.

The Senate also scrapped the requirement of a sanitary pass for sports activities for minors.

France’s health minister, Olivier Véran, who was present during the debate, argued that he didn’t “have enough perspective right now” to “deprive” himself of “a tool that is functional” and “very well accepted by the people.” He said this despite the fact that the number of official COVID hospitalizations is continuing to fall, having remained relatively low for months, while deaths attributed to the virus are also at a low level. As to the idea that the pass is “well accepted,” this may be true for a section of the population that is terrified by COVID, following months of non-stop propaganda about the virus, but by and large many people from all walks of life seem to be skeptical and in a truly French fashion, some appear to be finding ways and means to circumnavigate restrictions while many more have simply stopped going to restaurants, cinemas, museums, sports venues and the like where the pass is required.

The number of people who admit to having taken the COVID jab — which is what the pass is all about — merely to enjoy leisure activities or out of fear of losing their job is also high, and a symptom of extended government bullying in that direction. Since October 15, testing for COVID in view of obtaining a 72-hour sanitary pass must be paid for by the unvaccinated, to the tune of 22 to 44 euros per test.

The Senate also scrapped one of the most controversial measures in the government’s initial text as adopted by the National Assembly, refusing to allow medical confidentiality to be violated by giving school directors access to information about the vaccine status of their students.

By voting for the automatic deactivation of the sanitary pass, the Senate has apparently decided to ease the pressure on the unvaccinated to go ahead and get the spike protein injection. But what will happen if the health authorities decide that a third shot will be demanded in order to recover the “fully vaccinated status” that a large proportion of the French population has now acquired is anybody’s guess. As stories about adverse events linked to the jabs are slowly going mainstream, the government may find it more difficult to impose its narrative.

As things are right now, government officials are treading a thin line, wavering between alarmist forecasts about the probable increase of “infections” and hospitalizations following a slight rise in “cases” as the weather cools, and reassuring the population with talk of the “success” of the “vaccine campaign.”

Meanwhile, in the French Senate, a small minority actually defended common sense and public freedoms with unsuccessful amendments seeking to put a full stop to all restrictions. They could hardly hope to obtain victory as Senate reports presented over the last months have shown that many members, especially from the center-right, are in fact favorable to more stringent measures and government control, even suggesting that “infected” people should be deprived of the use of their credit and bank cards if they did not respect quarantine.

Stéphane Ravier, of the Rassemblement national (Marine Le Pen’s party) was the most outspoken. He told his colleagues: “As to returning to freedom, Parliament continues to be docile and I am afraid the sanitary ausweis [the name of the pass required by the Nazi occupants in France during the Second World War) will be extended. Blackmail in view of vaccination has been confirmed, as is its corollary, universal and general control of the population, as well as the end of medical secrecy which has brought about an even greater fracture within society.”

On the left, the communist group obtained a vote in favor of a public enquiry into the closing of thousands of hospital beds since the COVID crisis began, as many hospitals are struggling to function under the pressure of resignations of personnel, in particular those who are refusing to take the COVID “vaccine” that is mandatory for their professions.

But the tepid resistance of the Senate has still put the government in an awkward position. The overhaul of the sanitary state of emergency bill means that having been adopted in widely diverging terms by the National Assembly and the Senate, the planned legislation will need to be discussed in a “joint parliamentary committee” including members from both legislative bodies. As things are, the chances that the committee will achieve a consensus are very slim. In that case, the National Assembly would have the upper hand, but at a political cost to Emmanuel Macron who is already campaigning for his reelection next April.

This does not mean that the government will not go ahead and show its will to exert ever-increasing dictatorial control. As energy prices continue to rise and thousands of people are losing their jobs because of vaccine mandates or pressure, as well as the economic damage caused by COVID restrictions, tension cannot but grow.