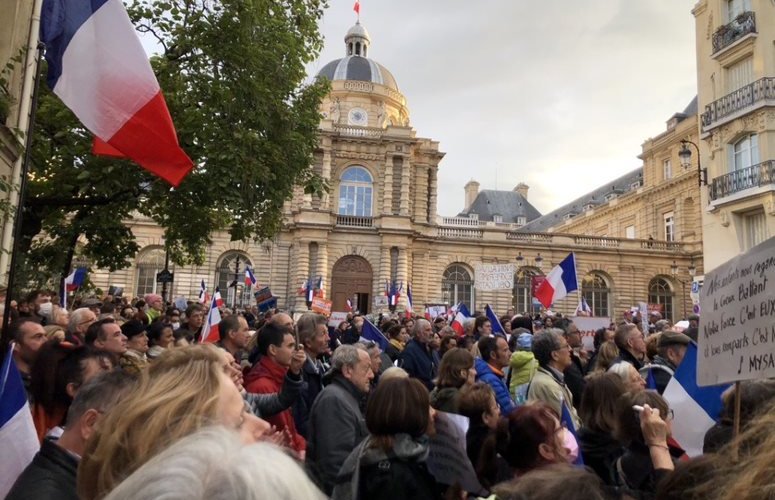 (LifeSiteNews) — A small but significant victory was achieved Wednesday when the French Senate voted against a socialist senator’s proposal to make the COVID experimental vaccine mandatory for all citizens living in France. Non-compliance would trigger a fine of 135 euro (about $150 USD), and 1,500 euro for re-offenders.

The rejection of the draft law presented by Senator Patrick Kanner together with several dozen other socialist members of France’s upper chamber did not come as a complete surprise. One week earlier, the Senate’s social affairs commission had refused to adopt the proposition.

But Wednesday’s public vote, with 80 percent against making the injection compulsory for as many age groups as France’s Higher Health Authority would deem convenient, was a slap in the face to those who are already coercing people into getting the jab in order to enjoy the ordinary freedoms of life or to keep their jobs.

Only 64 senators voted for the bill and 262 voted against.

Compulsory COVID-19 vaccination is already the rule for health workers and first responders, who will need to prove their fully “vaccinated” status by October 15 or be suspended without pay, unemployment benefits or the right to work within their field.

To date, an estimated 300,000 of 2.7 million health professionals of every rank – according to numbers quoted by COVID “vaccine” opponents – have given up their jobs and careers. They do not want to get a “vaccine” that works as a gene therapy, making human cells produce viral Spike protein, whose toxicity has been expressing itself widely through millions of adverse events in all stages of gravity — from fever and discomfort to serious illness and even thousands of unexplained deaths shortly after receiving the jab.

However, the French health minister has repeatedly underestimated those numbers, admitting 3,000 “suspensions” at first and now “15,000.”

Wednesday’s debate started quietly with a speech by Kanner, who correctly identified the fact that France’s administration has set up a vaccine mandate in disguise by submitting all citizens age 12 and over to the “sanitary passport” without which they cannot go to leisure, culture and sports venues, restaurants, cafés, hotels and even non-urgent hospital appointments. Nor can they use fast trains or long-distance buses.

In France, you need proof of “full vaccination,” recovery from COVID less than six months ago or a negative COVID test less than 72 hours ago to obtain the pass and its QR code. PCR and antigen tests have been 100 percent “free” (paid for by the social security system) since the beginning of the COVID crisis, but as of Friday, all tests for adults not prescribed by a doctor because of “symptomatic” suspicion of COVID will be billed to those who take them “for personal convenience.” At $20 to $30 per test – the much cheaper self-tests that were allowed up until now if performed under supervision of a health professional will no longer be valid as of October 15 – this would amount to a considerable budget for families and teenagers.

High school students are already being deprived of sports and social activities when they refuse the jab, and according to some reports, they are already being shamed in classes with lists being made public of the “good” young people who got the experimental jab.

France needs “clarity” and “transparence,” said Kanner, seconded by the rapporteur for his draft law, Bernard Jomier, who regretted that “about 9 million people still need to be “immunized” against COVID in France through vaccination.

As in many other countries, natural immunity born of the successful fight against the infection itself is only being taken marginally into account, with the jab being presented as the “only way out” of the “pandemic.” This is despite the fact that the COVID “vaccines” have been proven not to protect their recipients from infection or do they prevent transmitting the virus. While there are claims that the number of infections is lower in the “vaccinated,” and that people who do get COVID while “vaccinated” have less severe forms, there is growing evidence that this is not the case, as numbers from Israel and the Seychelles have shown.

Another shot is currently being touted in France because of the inefficacy of the “vaccines” against the Delta or Indian variant. Employment minister Elisabeth Borne went on record Thursday saying she could not say that people with only two shots of an authorized anti-COVID vaccine would lose their sanitary pass if they refused a third dose of the “vaccine.”

The French Senate is not (yet?) ready, however, to counter mandatory vaccination as such in a country where newborns are now required to receive 11 different vaccines (not including COVID-19) before reaching 18 months. Vaccine certificates are required to attend daycare centers, schools and similar activities, but the obligation is not as stringent as the QR-controlled COVID-19 status.

“Les Républicains” senator (right of center) Sylviane Noël was loudly ridiculed when she told the assembled Senate, also in the name of six other “LR” colleagues, that “making the administration of genetic vaccines whose experimental phase is still underway mandatory, is politically ill-considered and morally reprehensible.” “It is even impossible under the law,” she said.

She was blasted for having opposed the vaccine itself and not the vaccine mandate, with one “LR” colleague saying he was “ashamed” by her words.

Another senator, linked to “Les Républicains,” Laurence Muller-Bronn, gave an even more striking explanation for her vote against the experimental “vaccine.” While Noël’s words were reported by the mainstream media, there was less publicity for Muller-Bronn’s strong words.

She courageously stated that those who are ready to think and to doubt about the COVID “vaccines” are now being treated as “obscure conspiracy theorists” even though top level scientific institutions are having the same kind of doubts, such as the Academy of Medicine that has refused to recommend a third dose of the vaccine. She also quoted the Council of Europe’s January 2021 resolution against mandatory vaccination, and the Scandinavian countries’ decision to ban the Moderna jab for young men because of its dangerous adverse events.

Muller-Bronn added that France must respect its constitutional “principle of precaution” and waive people’s right to give free and informed consent before receiving an “experimental substance.” She recalled that mRNA “vaccines” will be in their experimental phase until 2023 and that they only have a temporary marketing authorization at this point.

She recalled that many international reports have risen serious doubts about the innocuity of the experimental “vaccines,” and in particular the risks associated with using them for young people, children, patients with serious illnesses and pregnant women.

She also reminded her colleagues of the “psychological damage” created by present “sanitary injections,” and told them that there is no “scientific consensus” regarding the COVID “vaccine,” while “natural immunity” has been pushed aside.

“What legitimacy do we, as parliamentarians, have to be satisfied with a single doctrine and to decree compulsory vaccination, when doctors, caregivers and scientists have doubts — even to the point of giving up their income because of their convictions?

“If the government is sure of itself, let’s open a dialogue: we are not the registration chamber of the Scientific Council.

“It is our duty to restore civil liberties.

“Now that the pandemic has subsided and 80% of the population has been vaccinated, it is time to abandon the vaccination obligation and the third dose.”

Arguably, this is the first time since the beginning of the vaccine rollouts that the French Senate has heard such clear language.

The next step facing French politicians will be the prolonging of the possibility for the government to have recourse to sanitary pass until July 31, 2022, after the presidential and legislative elections next spring. Under its current form, the sanitary pass has obtained a positive parliamentary vote only until mid-November. On Wednesday, France’s council of ministers approved the draft law that, if adopted, would allow them to continue breaking people’s freedoms in the name of the COVID epidemic, brandishing the threat of a “fifth wave” that they appear to be expecting, if not hoping for, as the weather gets colder.

Both the socialist proposition to make the COVID jab universally mandatory in France and this prolonged infringement of public liberties were vigorously protested by a public rally in front of the Senate on Tuesday from 5 p.m. to 6:30 p.m. Some 3,000 demonstrators joined the static event in the heart of Paris, calling for “Resistance,” “Liberty” and “Truth.”

One nurse who was suspended on September 15 because she refused to take the first dose of the COVID “vaccine” was present and told LifeSite her dismay at her own administrative director at having to suspend appreciated members of her workforce. “I have no choice,” she unhappily told the nurse.

French hospitals are under growing strain because of the forced suspension of health workers. Tuesday’s demonstration also demanded an end to vaccine mandates for these professions.