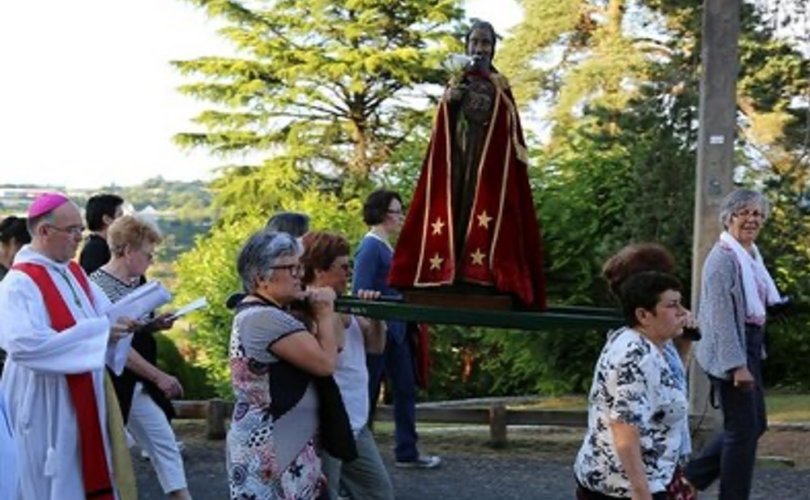 La Lunade, a traditional French prayer procession, involves a 6 km pilgrimage with a centuries-old statue of St. John the Baptisthttps://www.correze.catholique.fr/actualites/procession-de-la-lunade

June 25, 2020 (LifeSiteNews) – For the first time since the 14th century, a Catholic procession that takes place every year on the eve of the Feast of Saint John the Baptist in the town of Tulle was officially banned by the civil authorities, under the pretext of COVID-19 regulations. Local residents were shocked and surprised to learn, hours before the traditional march was to take place, that the local prefect – the government’s representative in the 100 or so “départements” of France – had decided not to allow it to go ahead.

Ironically, the “Lunade,” as the procession is called because it takes place at nightfall, when the moon (lune in French) becomes visible, first took place around 1340 or 1348 – sources differ – when Tulle, a town of 6,000 souls that had been occupied some 10 years earlier by the English, was suffering from famine, pestilence, and “great mortality.”

According to oral tradition, a monk of the Diocese of Tulle was praying in the cathedral for the town that was going through so much hardship, when he received a vision of St. John the Baptist asking him to organize a march around the city that would ward off the plague.

The procession duly took place and according to local tradition, the city was delivered of plague.

Since then, every June 23 is marked by the 6 km march among the hills that border Tulle, during which parishioners carry the same statue as the one that saved the city more than 670 years ago: a statue blackened by time, clothed with red velvet robes, and adorned with a white lily.

The procession took place uninterruptedly, even during the French Revolution in its years of “Terreur,” spates of secularism, and two World Wars. Nowadays, some 50 people turn up for the beginning of the procession at the cathedral porch after a  6:30 p.m. Mass, others join along the way at “stations” marked by crosses along the traditional route. By the time the procession returns to the cathedral some 300 to 500 faithful are present, which is not little for such a sparsely populated “département” as the Corrèze, of which Tulle is the religious and administrative capital.

This year, the procession of “La Lunade” was to be quite different, even though it should have taken place with all the usual participants. In order to follow recommendations against the spread of the Wuhan coronavirus, the local clergy had taken every precaution: the faithful would march in little groups of 10 people,  customary halts would also be organized so as to avoid gatherings of more than the approved 10 persons under current measures in France. No more than 200 people would be allowed into the cathedral and all would be required to wear masks at the beginning of the procession.

The local daily La Montagne dated June 23 also reported that Father Nicolas Risso, vicar general of the diocese, had asked the faithful not to bring flowers to honor St. John the Baptist and warned that no candles would be distributed, as would have been the case in ordinary circumstances.

Fr. Risso added that the procession was one of the oldest such religious gatherings in France still active today, and underscored that the department of Corrèze had been largely spared by the coronavirus: “That gives meaning to the Lunade,” he said.

There were indeed few COVID-19 infections in Corrèze and less than 40 coronavirus-related deaths, the last of which took place over six weeks ago.

The faithful were all the more surprised to learn on Tuesday afternoon that the prefect of Corrèze had taken a last-minute decision to forbid the Lunade from taking place.

Fr. Risso published a statement warning the “Christians of Tulle” of the ban, in which he recalled that all necessary sanitary measures had been taken. “I have taken note of the decision,” he added, explaining that he and a tiny group of no more than six people would carry the statue of St. John among the hills of Tulle, while the ordinary pilgrims would gather in the cathedral to follow the procession “virtually.”

“Please accept our apologies for this change of program that is beyond our control,” he wrote. The statement was published on this website of the dioceses and texted to a number of faithful.

But many who had not seen the message gathered at the cathedral all the same and expressed their anger. “I’m horrified, appalled, this is unacceptable,” said one parishioner, Marie, quoted by La Montagne.

Some decided to “defy the law” and followed the embryonic procession at a distance, while many others waited in the cathedral, underscoring that they would have been better outside in the open air rather than “confined” in the historic church built between the 12th and 15th centuries.

One lady, Christiane, decided to go home as soon as the small group carrying St. John the Baptist had left the cathedral porch. She explained that her own grandfather had smuggled the statue out of the cathedral in a sack by a backdoor in 1896, when the local mayor prohibited the 548th procession of La Lunade, and armed gendarmes were stationed in front of the cathedral porch, stopping the faithful from leaving the cathedral. Four infantry regiments were at the ready at some distance away.

The mayor was invoking several anti-Christian laws that had been adopted in 1789, the first year of the French Revolution, and 1837, against Catholic processions. A first attempt to block the Lunade had failed in 1881 when the church authorities successfully blocked a local order through judicial appeals. But in 1896, the secularists resumed their anti-Christian acts.

It was a group of gardeners that carried St. John’s statue out of the church and managed to hold the procession all the same during the night of June 24. A Magnificat was sung in the cathedral upon their return in the early morning, to cries of “Vive la liberté!” – “Long live freedom!”

At the time, the local bishop had asked the crowd present in the cathedral to remain calm and not to react to “treacherous provocations.”

“When the Masonic plague, more pernicious than the pestilence in the 14th century, will at last have passed, you will be able, with a profound sigh of relief, be able to celebrate for a second time the Liberation of the city of Tulle,” said Bishop Denéchau on that fateful eve of June 23, 1896.

In 2020, the persecution of Catholics is more subtle. But the local faithful in Corrèze clearly see the “incoherence” and “injustice” of measures taken against the Lunade, even though every precaution had been taken and despite a decision by the Council of State on June 13 stating that a blanket ban on gatherings of more than 10 people should not exist.

The Council of State, France’s highest administrative authority, said that beyond “particular circumstances” public gatherings should not be banned when “barrier measures” can be put in place and no more than 5,000 people are expected to take part.

The “Music Feast” that takes place in France every year on June 21, involving public concerts in the open air, was allowed in Tulle this year. A dozen bands played in different parts of the town, offering 15-minute concerts every half-hour, that people could join in small groups that in practice exceeded 10 people.

The people of Tulle were all the more indignant that the procession could not take place that the “Fête de la Musique” was allowed and encouraged by the local civil authorities – especially when COVID-19 infections were not even being counted in Corrèze any more.

In Paris, one of the three French epicenters of the coronavirus pandemic, a large number of concerts took place with packed crowds dancing in the streets. In some cases, but not all, the police intervened to disperse them.

Thousands of people have joined “Black Lives Matter” marches in the larger cities of France over the last weeks. The French interior minister, Christophe Castaner, stated on June 9 that while the official prohibition of public demonstrations still held – this was before the June 11 deconfinement – there would be “no sanctions and no proceedings.”

“I believe that worldwide emotion, which is a healthy emotion regarding this issue, goes beyond applicable legal rules,” he explained.

In France, “emotion” now trumps the law, but only insofar as it is politically correct.