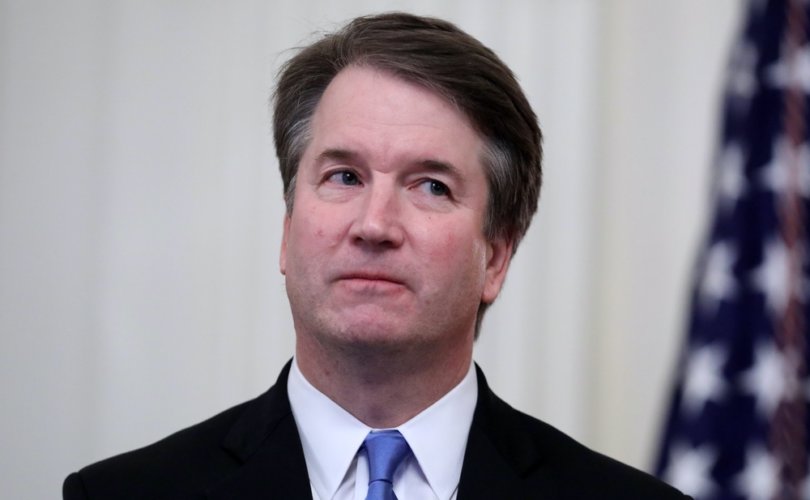 October 5, 2018 (LifeSiteNews) – A witness who could not corroborate Christine Blasey Ford’s story about Judge Brett Kavanaugh sexually assaulting her says a mutual friend pushed her to add that she believed Ford anyway, according to a bombshell report in the Wall Street Journal.

Ford, a Palo Alto University psychologist, came forward last month to claim Kavanaugh, President Donald Trump’s nominee to replace Justice Anthony Kennedy on the Supreme Court, tried to rape her as a drunken teenager at a house party in the 1980s. The judge forcefully denies the accusation.

Ford named three people – Mark Judge, Patrick “PJ” Smyth, and Ford’s personal friend Leland Keyser – as having attended the party, but all have told investigators under penalty of perjury that they cannot recall any such party, let alone an assault. Ford was also unable to recall how many people attended the alleged party, the house’s location or owner, the year of the party, or who drove her there and home.

“Ms. Keyser does not know Mr.Kavanaugh and she has no recollection of ever being at a party or gathering where he was present, with, or without, Dr. Ford,” Keyser’s legal counsel has stated. However, her attorneys subsequently told the Senate Judiciary Committee that Keyser “does not refute Dr. Ford’s account, and she has already told the press that she believes Dr. Ford’s account.”

Multiple news outlets seized on that vote of confidence to produce headlines claiming that Keyser “is not refuting” and “doesn’t deny” Ford’s story. But the WSJ reports that it was the result of urging by former FBI agent Monica McLean, another friend of Ford’s and a former spokesperson to Preet Bharara, a left-wing former US attorney fired by Trump last year.

The revelations came in texts from McLean to Keyser, which were among the materials the FBI sent to the White House and Senate as part of its seventh background investigation into Kavanaugh. Keyser reportedly also told investigators McLean contacted her to “clarify” her original statement.

Another “person close to the former classmates” told the WSJ that multiple mutual friends of Ford and Keyser, including McLean, told Keyser that saying she didn’t remember the party could be misconstrued as a declaration the party definitely never happened. This person disputed the characterization of this advice as “pressure.”

McLean’s attorney David Laufman responded to the revelation by insisting “any notion or claim that Ms. McLean pressured Leland Keyser to alter Ms. Keyser’s account” was “absolutely false.” Attorneys for Ford and Keyser declined to comment to the WSJ.

This is not the first question that’s been raised about McLean’s involvement in the case. Earlier this week, Senate Judiciary Chairman Chuck Grassley released a letter in which an ex-boyfriend of Ford’s claims to have witnessed Ford coaching McLean to pass a polygraph test for job interviews – advice Ford testified she had “never” given to anyone. McLean has denied the claim.

Nor is this the first question about Ford’s invocations of Kesyer. “Dr. Ford listed Patrick “PJ” Smyth as a “bystander” in her statement to the polygrapher and in her July 6 text to the Washington Post, although she testified that it was inaccurate to call him a bystander,” noted Arizona prosecutor Rachel Mitchell, whom Senate Republicans enlisted to cross-examine Ford. “She did not list Leland Keyser even though they are good friends. Leland Keyser’s presence should have been more memorable than PJ Smyth’s.”

Kavanaugh’s nomination has inflamed passions on both sides, as his replacement of liberal “swing vote” Kennedy might give the Supreme Court its first clear conservative majority since Roe.