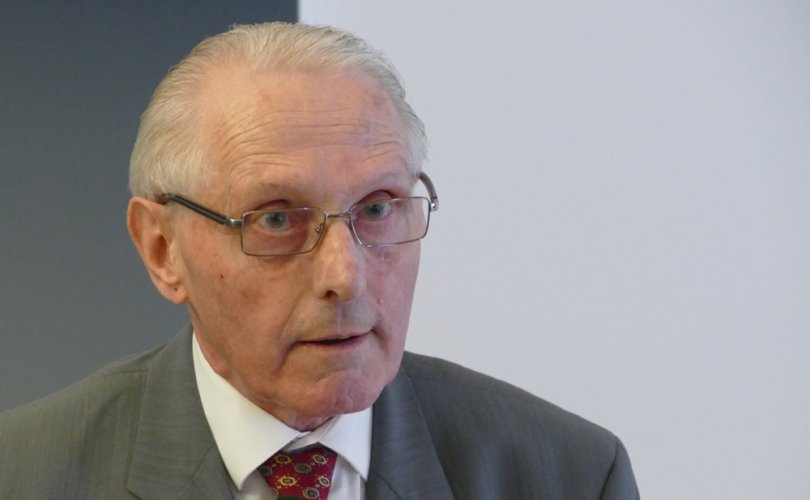 Prof. Gerard van den Aardweg speaks at the John Paul II Academy for Human and Life and the Family conference in Rome May 21, 2018Steve Jalsevac / LifeSiteNews

ROME, June 14, 2019 (LifeSiteNews) — A Catholic psychologist has denounced the latest Vatican document on gender theory as containing “not one sentence of sound advice for parents who try to educate their children towards the virtues necessary for a Christian life.”

In a searing critique, Dr. Gerard J.M. van den Aardweg, a Dutch psychologist and psychoanalyst specializing in the treatment of persons with homosexual tendencies, condemned the recent Vatican document on gender theory, saying “the aggressive neo-pagan sexual ideology of the world has no wisdom we might share. The task of the Church is not dialoguing but teaching and correcting, there is a relentless spiritual war going on in the field of sexuality, marriage, and the family.”

The (non-magisterial) document, titled “‘Male and Female He Created Them’: Towards a path of dialogue on the question of gender theory in education,” was published by the Vatican’s Congregation for Catholic Education on June 10.

Addressed to Catholic schools and those involved in the formation of children and young people, the document has provoked admiration and consternation and drawn considerable attention in the Catholic and secular media.

Catholic media on the whole have shown a favorable response. The New York Times focused on the document’s rejection of the idea of gender fluidity. And “LGBT” activists criticized the text for its clear affirmation that human persons are either “male” or “female,” saying it keeps the Vatican “in the dark ages, promoting a false teaching that relies on myth, rumor, and falsehoods.”

In the midst of these conflicting opinions, LifeSite spoke with Dr. van den Aardweg — author of “The Battle for Normality” (Ignatius press) and “Science says NO: The gay ‘marriage’ deception” — about his view on the document.

The Dutch psychologist did not mince his words.

Here below is our interview with Dr. Gerard van den Aardweg.

LifeSite: Dr. van den Aardweg, what are your general impressions of the Vatican’s new document on gender theory?

Dr. van den Aardweg: Basically, it is an ideological document. It is not specifically Catholic, in spite of some lip service. It essentially makes a plea for a kind of atheist-humanist/socialist sex education, presented as more or less Catholic. It gushes over the boons of a social model of sexual education monitored by “professional experts” on the basis of naively supposed ever-deepening insights into sexuality in the current human sciences. It represents the kind of illusionary and sentimental talk about education and “affectivity” characteristic of the immature and superficial humanistic psychology of the 1960s, but now proclaimed as ‘higher wisdom’ by a Vatican Congregation whose members run half a century behind the times. It is ‘dialogue’ and ‘listening’ and ‘openness’ all over again. But no listening to the divine teachings of the Catholic Church on sexuality, marriage and the family (for these seem in need of ‘restructuring’). Teaching and preaching them to a pagan world is not, it seems, the way forward. The great dream is an “alliance” with the neo-paganism of the sexual, marriage, and family ideology of the UN and the anti-Christian EU countries.

“Listening.” Well, listening attentively to the document’s vague and ambiguous formulations and suggestions in order to discern what it drives at, one can discern its lead motive: revolutionary change.

What is your view on its analysis of gender theory?

The observations on gender theory are ambiguous and unclear, and that makes them suspect. At face value, some phrases seem correct and “orthodox,” such as the denials that sexual “identity is not a choice of the individual,” and platitudes such as “sexuality [a person’s sex] is a fundamental component of personhood” or “every cell in the body is male or female.” However, they are simultaneously undermined by statements such as (I abbreviate): “The approach to gender theory [is] the path of dialogue.” Why would that be so? No answer, because we are in the domain of ideology. What is there to dialogue about? We know the effects of dialoguing from the experiences with the Communists. The enemies of Christianity will dialogue with you in their way, on their terms. The outcome is none other than dialoguing with the devil. The aggressive neo-pagan sexual ideology of the world has no wisdom we might share. The task of the Church is not dialoguing but teaching and correcting, there is a relentless spiritual war going on in the field of sexuality, marriage, and the family.

Another example: “Human sciences … [present] other work … which tries a deeper understanding.” There follows a vague reference to works about the “sexual difference between men and women in a variety of cultures.” Here as everywhere in this document, only suggestions or insinuations are given, without a shadow of proof. So, which allegedly better “work” is meant here? I surmise the authors refer to the once-popular writings of Ruth Benedict and Margaret Mead, the lesbian feminists who attempted to show the relativity of sex roles and functions in non-Western societies. But their contentions have long been refuted as being based on false, partly even fraudulent, evidence.

The relativization of the unpopular Biblical view of man-woman relationships and social “roles,” in apparent support of feminist (and gay?) indignation, also appears in the glib contention about “unjust discrimination,” which is “a sad fact of history” also “within the Church.” The Church would have violated the “equal dignity of men and women” in consequence of a “masculinist [sic] mentality veiled by religious motives.” If this is not a sneer at the Catholic teaching about man as the head and woman as the heart of the family, and the woman’s duty to obey her husband etc., what else is being suggested? Or, looked at from a different angle, who can believe the authors of this text are still capable of transmitting the unchangeable divine teachings of the Apostles, St. Augustine, and the Popes Leo XIII and Pius XI? Probably, these authors, blinded by the spirit of the times (Zeitgeist), do not even understand them anymore, nor do they seem to know and understand the correct anthropological and psychological insight of St. Edith Stein that “woman is by nature mother and the companion of the man.” For any Catholic who knows and understands this truth would have made it the cornerstone of a discourse on the equal value of man and woman.

Equally disquieting is the authors’ dubious appreciation of the natural family: “To qualify it [the family] with ideological concepts which are compelling at only one moment in history, and then decline … is a betrayal of its true significance.” Do the aforementioned apostolic teachings belong to the category of temporary historical “ideologies” about male and female? If not, why didn’t they recommend them at all; and what false ideological concepts have been attached to the family that are not essential? For example, has the traditional concept of the Christian family in the light of the present enlightened insights been narrowed by our cultural prejudices? In sum, give a clear, unambiguous definition of the natural and God-willed family and unambiguously reject the political definition of, among others, the Christian Democrats.

The document frequently cites Pope John Paul II. What do you think of its use of his writings?

Pope John Paul II is quoted but fairly hypocritically. His prestige is abused to create the impression of orthodoxy, a characteristic the writing as a whole has no right to claim. The authors have even the evil courage to recall the name of Don Bosco, whose teachings and efforts were diametrically opposed to theirs and were therefore truly exemplary.

Does the document presume that sex-education should always be made available in schools? Is the position the document takes in this regard consistent with the constant teaching of the Church?

Parental rights in education are professed with words, but the whole, and in essence, socialistic-bureaucratic organization to educate the “sexuality and affectivity” of children and youngsters about which these utopians are dreaming will no doubt soon squeeze the parents’ rights into extinction. The proposed educational “professionals” within and outside the school, with their “permanent education” coming from “universities” etc., with their close association with the secular organizations (“local, national and international”!), with their new “programmes, instruction materials, and reference books,” and paid by who else but the State, will guarantee politically-correct sex ed. It proposes an idealistic “educational alliancebetween family, school, and society”: come to Holland, Germany, or Great Britain and see how smoothly it functions… No one who objects, no school, no collective of Catholic parents, only a rare Catholic teacher, a loner, a few exceptional Catholic parents, who refuse to cooperate with these cheerful “programmes” that violate their pupils’ and children’s innocence. Indeed, as this Vatican document remarks, “the family is not left to face the challenges of educating the young on its own.” And the “authorization” of the parents is a good principle, but “to a certain degree.”

Do you have any other comments?

The conclusion of the document, though still evading honestly straightforward and unambiguous language, helps in grasping its real meaning and purposes. Consider these high-falutin’ declarations: “The (educational formators) have the mission to teach them [young people] sensitivity to different expressions of love, mutual concern and care, loving respect (sic) and a deeply meaningful communication”; “Train young people to be open and interested in the reality that surrounds them, capable of care and tenderness.” This has been precisely the sales pitch of the neo-pagan Sexual Reform Movement for at least a century. All kinds of sexual or “love” relationships fit into this ideal, unmarried as well as gay ones. There is nothing in the Vatican text about sexual sin, the fight for chastity, masturbation, unfaithfulness in marriage, unmarried cohabitation, chastity in marriage; not one sentence of sound advice for parents who try to educate their children towards the virtues necessary for a Christian life and against the pressure of the neo-pagan environment, school, and even church; nothing about contraception, sterilization, and abortion.

Finally, the style of the piece is terrible: it is permeated by pompous and sentimental language, hypocritical unctuousness. The intellectual level is substandard. No concept that is used is defined, no statement proved or even supported by some argumentation; the references and remarks relative to anthropology and psychology (“the human sciences”) are misplaced or outright nonsensical, and yet they are solemnly presented as ‘superior wisdom.’

A Vatican congregation which dares to produce and issue such a document should seriously consider closing up shop.