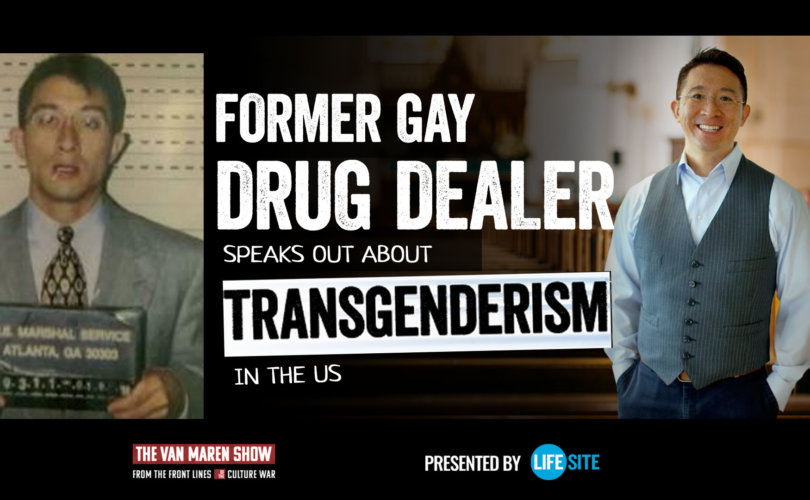 February 5, 2020 (LifeSiteNews) – Dr. Christopher Yuan, a former agnostic gay man who was also a drug dealer, joins Jonathon Van Maren on this week’s episode of The Van Maren Show to discuss his powerful journey and conversion and what the LGBT agenda is doing to society.

Yuan was raised in a ‘very traditional’ family with ‘Asian values,’ although he was not raised Christian. He first encountered pornography at age 9. He said this was the “first time that I recognized that I had these [homosexual] attractions.” Yuan officially “came out” in his late 20s while pursuing his doctorate in dentistry, much to the dismay of his parents. His mother told him to choose to be homosexual or choose the family, but he couldn’t have both.

“My mom even says news of my death would have been better than receiving that type of rejection,” he said.

Feeling as though this wasn’t a choice, rather a part of who he was, Yuan went back to school and immersed himself even deeper into his party lifestyle. He points out that it wasn’t same-sex attraction that pushed him into the party lifestyle, but a lack of God.

“If you're not a believer in Christ, you're going to live it up and have fun,” Yuan states.

As he slid deeper and deeper into the party life, Yuan began selling drugs in order to maintain his own drug habit. He was expelled from school just 3 months before receiving his doctorate. Yuan then moved to Atlanta and sold and distributed drugs to dealers in “over a dozen states.”

During this time, Yuan’s parents had found Christianity. Yuan says his parents’ profound conversion gave them the ability to love their wayward homosexual son. His parents didn’t accept Yuan’s promiscuous lifestyle, but they prayed and prayed for him, soliciting the help of their entire church.

Yuan says that his mother prayed that God would do whatever it took to bring Yuan to the faith. Yuan was arrested for selling and distributing drugs in Atlanta. He called his parents from jail and he recalls the first question his mother asked was, ‘are you OK?’ He was touched by the great love she showed in such a trying time.

While in jail, Yuan hit rock bottom. He found a Bible on top of the trash one day and began reading it. He started seeing the jail chaplain and studying the faith. To his dismay, when he asked the chaplain about homosexuality and the Bible, he was told God didn’t see anything wrong with homosexuality. Although Yuan wanted to accept this, a small voice inside of him continued to put doubts in his heart as he didn’t see how this could be aligned with the Bible.

After being released from jail Yuan started studying at Moody Bible Institute where he is now a professor. He completed his studies at Moody and went on to obtain a Doctorate in Ministry at Wheaton College. He also wrote a book with his mother titled Out of a Far Country, detailing the saga both he and his mother went through when he broke away from the family to embrace homosexuality.

Yuan and Van Maren go on to discuss the lies the culture, and even some Christians, are telling about homosexuality. Yuan points out that the devil tempts by false teachings that are mostly true. To be the most convincing false teachings are often 90% true and only 10% false, but that false 10% can lead one to sin.

Following that same reasoning, Yuan points out that the words we use and how we use them is important. For example, to say one is a ‘celibate gay’ person intones that gay is a fundamental part of who they are, and their behavior is celibate. Yuan would argue that this isn’t the case. A person is not defined by their same-sex attraction, but as a child of God. The language being used, even by Christians who oppose homosexuality can negate their beliefs. Another example is to say one is a ‘straight Christian.’ No, Yuan would say, you are “Christian,” no modifier needed.

Yuan says that the opposite of homosexuality is not heterosexuality, but holiness. He highlights that God calls us all ‘to be holy as He is holy.’ Everyone, because of fallen nature, has a temptation to sin. But everyone needs to continue to fight that temptation and work to answer the call to holiness.

Yuan and Van Maren discuss the postmodernism philosophy and how this thinking has permeated all of society and continues to spread. Based on the postmodern philosophy, Christians who promote God’s teaching and design for sexuality are blamed for ‘killing’ homosexuals. By not accepting homosexuals, according to this argument, Christians directly lead to their suicides.

This simply isn’t true, Yuan points out. A well-known, scientifically rigorous study conducted in the Netherlands, a country that has one of the best societal acceptance for homosexual individuals, shows that suicide rates for homosexual teens is higher than for other teens. Even though these teens are acceptable and affirmed, the suicide rate is still higher than the ‘normal’ population.

A self-professed pessimist, Yuan sees the LGBT agenda continuing to grow, but he hopes that the true teachings of Christ will shine and touch hearts.

Yuan is a speaker and an author in addition to teaching at Moody Bible Institute. His works can be found here.