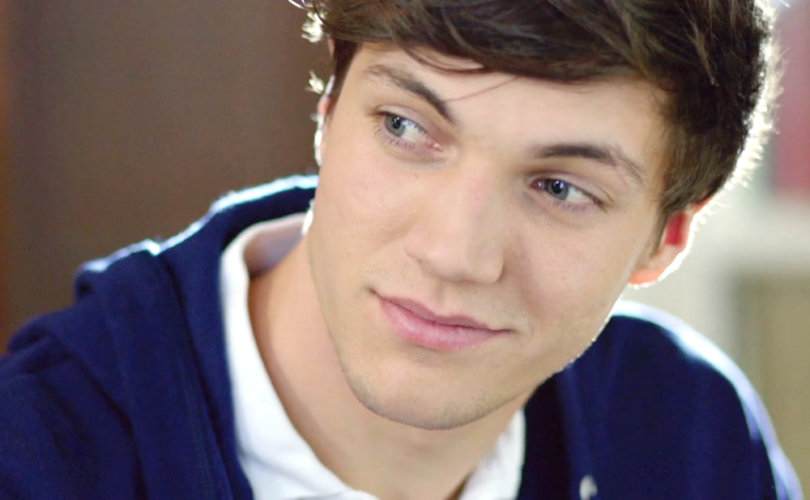 MINNEAPOLIS, Minnesota, September 7, 2017 (LifeSiteNews) — Because of Grácia opens in cinemas across the United States this month. LifeSiteNews recently spoke with star Chris Massoglia about his journey from homeschool dance class to Hollywood. Offered a chance to star opposite Nicole Kidman at age 10, Chris found that God had different plans for him.

LSN: Your family never wanted to move to Hollywood. Now that you’re 25, do you want to move there?

Chris: No, not really (He laughs.) I never enjoyed living in L.A. I’ve lived there during what’s called “Pilot Season”… I normally go out to LA for a couple of months during that time, live out there and do a lot of auditions. But I never enjoyed living [there]. It’s dirty, smoggy, and people are hard for me to connect to. It’s hard to tell who’s actually your friend and who’s just trying to build a relationship with you to try to get to someone else. I have met awesome people there and do have great friends there. But I’ve enjoyed Minnesota, and I like living in Minneapolis.

LSN: And you were homeschooled.

LSN: How does a homeschooler end up an actor?

Chris: For me, it was a God thing. I was doing this homeschooled ballet-tap-hip-hop performance class, and at the end of the year we did a little show. There was a lady there who thought I was a cute little kid [and asked], “Do you want to audition for this commercial?” and I said “Sure.” I ended up getting it, and then I auditioned for a big movie with Nicole Kidman when I was 10.

[The producers] were doing a national search for the next rising star and I got picked. I was flown out to New York and I read for the part, and I was one of the top two choices. And so I got an agent in New York and my first job was on “Law and Order.” I kept on auditioning, and I’ve got different roles throughout the years.

LSN: Back up. The Nicole Kidman movie. Apparently you didn’t do it after all.

Chris: No, I didn’t. That film was called Birth, and it was about Nicole [Kidman’s character] and her husband who had been reincarnated as an 11-year-old boy. It had some love scenes with the boy and Nicole Kidman, so my parents didn’t feel comfortable with me doing it.

LSN: What advice would you give to Christian parents who find themselves in such a situation?

Chris: Don’t let the excitement of the opportunities cloud your moral compass. Most parents, especially Christian parents, are protective and have a good idea of what’s right for their kid. It’s hard sometimes when you get these opportunities which could lead to success, open doors and building a career in entertainment. Parents have to not let anything cloud their wisdom.

LSN: Were you OK with your parents’ decision?

Chris: I didn’t even really know: I was 10! I was just excited to go to New York. I loved all the food and the buildings. I was having the time of my life, just being there. I wasn’t bummed at all. I thought it was exciting and cool, and from that I got an agent. It was still an awesome part of my life, so I wasn’t disappointed … I didn’t know what was going on until a few years later when my parents told me.

LSN: So your parents protected you?

Chris: When I was 13 or 14 I began to read the scripts, but early on my parents [did] and decided if I should audition for different projects or not.

LSN: How old were you in your first big Hollywood film, A Plumm Summer ?

Chris: Thirteen. That was my first feature film where I was a lead. That was pretty exciting.

LSN: Yeah, the Fonz was in it!

Chris: Yes, Henry Winkler. He was awesome. He was so nice, always encouraging us [young actors] and telling us, “You can be the best that you want to be in this industry.”

LSN: And then you were the lead in Cirque du Freak: the Vampire’s Assistant …

Chris: That was the biggest project I’ve been involved in, as far as the film industry goes. An over $50 million budget, creepy special effects, green screen [work], fight sequences, crazy cinematography stuff. It was a fun set to be on. A lot of famous actors were involved. I worked with an Academy Award winner, Ken Watanabe. I had three or four scenes with him, and that was an awesome experience.

LSN: What challenges did you have as a Christian doing this film?

Chris: Obviously in that project the subject matter was a little darker. There’s a scene where I had to drink blood. There’s a scene where there was some intense vampire stuff going on. I don’t think I was aware spiritually of what I was getting myself into, but it ended up being fine … God was always with me, and He got me through.

LSN: How did you get involved with the faith-friendly Because of Grácia?

Chris: I was taking a break from auditioning. I had been on a four-year hiatus, going to college, trying to decide where I wanted to be involved in the [film] industry. My pastor was watching a movie, God’s Not Dead, with a friend, and [he] turned to his friend and said, “Wow, wouldn’t it be awesome if Chris could do a movie like God’s Not Dead?” He told me about this, and [how] he was praying that something like that would open up [for me].

I didn’t know how I felt about it because of the traditional stigma of “Christian films” — that they’re ‘cheesy,’ they’re ‘not that great of a storyline,’ they have ‘bad actors.’ I [said], “Well, I don’t know if I want to be involved in a project like that.” But three days later, I got an email from my manager … an audition request for this project called Grácia, and it said, “From the co-producers of God’s Not Dead.” (Chuckles.) I was, like, “OK, Lord, is this You?” Like I said, I hadn’t been doing auditions […].

I auditioned for [Grácia], and I got the part. We shot the film, and it was one of the best experiences [for me] so far as an actor. I’ve been so blessed to be part of this film, and it’s changed my perspective on how to be involved [in film]. Being a part of Grácia has really opened doors and relationships in this circle of the industry that I had had no exposure to.

LSN: Wait, you’ve been in a $50 million budget movie, and a tiny-budget Christian film opened doors?

Chris: It’s opened doors for me in the industry in a different circle […] There’s so much changing [in Hollywood now]. People can do a film on a DSLR camera and a $50,000 budget and make two million dollars [… ]There’s a lot of Christians who want to tell their stories … but also bring out a quality product. The tech aspects [of their films are] excellent, the acting is excellent, and the storytelling is excellent […] I feel like I can be a bridge between the Christian film world and the Hollywood world. I’m excited to see what will came of this new arena that the Lord has led me to.

LSN: As an artist, where do you draw the line between propaganda and art?

Chris: Yeah. The writer-director Tom Simes is a high school film teacher up in Canada, and this story was [born] from a lot of his own experiences, kids who were in his class and a lot of real-life issues. So it really is just a story. Tom did an amazing job writing and directing it. When audiences see the film, they will come away saying, “Wow, that was a great story.”

LSN: A critic of the trailer said that she thought the film was trying to tackle too many issues. What do you think?

Chris: Young people today face so much in school, and there are so many different situations that we run into. The objective [of the film] was just to tell a story about characters and about what [they] deal with as seniors in high school. It’s an honest portrayal of what young people are going through today.

LSN: What would you recommend to Christian kids with acting dreams?

Chris: The first priority is [to ask yourself], “Are you doing what God wants you to do?” There’s a difference between having a dream for yourself and really hearing, and being obedient to, what God has [planned] for you. There’s a verse in Matthew that says “Seek first the Kingdom of God and His righteousness” and everything else will be added …

God called me to lay down my own dreams and my own aspirations of being in the [film] industry, and winning an Oscar … I went through that process of saying “OK, God, I want you to lead my life and my career and my journey in the industry.” That’s when I saw God bring Because of Grácia and this whole new [Christian] arena I spoke about earlier.

For those who feel called to the [film] industry … make sure you have a good support system and a good community, good friends beyond your parents. Every kid has to have that “flying out of the nest” experience where you leave your parents, what’s familiar, and you make your own decisions. And in that process of becoming an adult, you really do need community because, if you don’t have that, it’s easy to get sucked into the world and everything the world has to offer. The biggest thing is surrounding yourself with the right people and trusting them. Don’t turn your back on those close to you.

LSN: Because of Grácia comes out on September 15. Where are you going to be?

Chris: I’m going to be in Minnesota for opening weekend, visiting the different theatres. The second weekend I’ll be at a theatre down in Iowa. Then we’ll see what happens. The [goals are] for the theatres to be full on opening weekend, for the bookers will see that and want Grácia in their own theatres, and for everyone who enjoys the film to tell their friends, and word of mouth will spread the [news] of the film. We hope to grow to 500 to 1,000 theatres.

We’ll see how the Lord leads it all. I’m excited to see what He does with the final results.

In an email exchange after the interview, Chris Massoglia told LifeSiteNews, “I am super passionate about life. I speak up for the unborn at every opportunity and am a HUGE supporter of Students For Life because they are impacting the next generation and turning the tide on the pro-life issue in America. I sell LIFE hats on my website and donate the proceeds to Students For Life.”