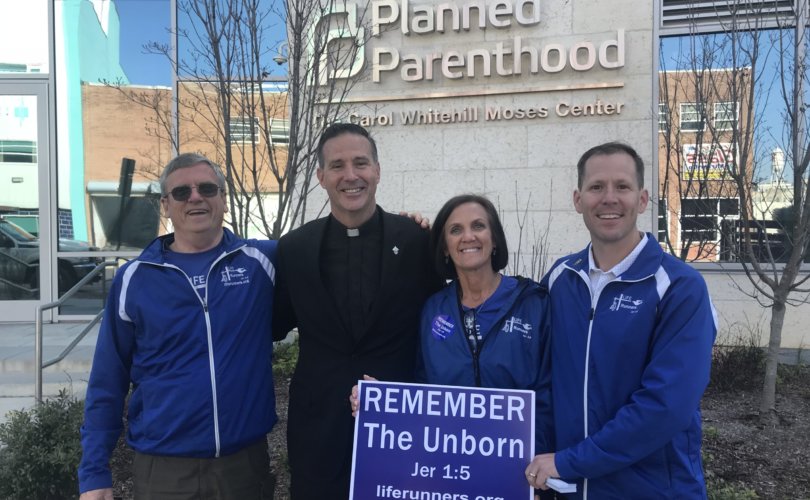 WASHINGTON, D.C., April 11, 2019 (LifeSiteNews) — In 1988, Joseph Coffey was in Germany, selling Japanese cars to American soldiers, and “having a good time, not really not knowing what my future was going to be.”

On March 25, he was ordained in Washington’s Shrine of the Immaculate Conception as an auxiliary bishop for the military archdiocese of the United States, which counts as its members every Catholic on active duty in the Army, Navy, Air Force, and Marines.

What brought the wandering Coffey back to America so many years ago was a little story in the International Herald Tribune: 500 people had been arrested for sitting in front of an abortion center in Cherry Hill, New Jersey, in “this thing called Operation Rescue.”

By then, Coffey had been working and travelling around Europe five years — including two months as a ski instructor in Switzerland — and the news of Cherry Hill hit home. It’s just across the Delaware River from Philadelphia, where he was born and raised, the fifth of nine children of Dr. William and Roseanita Coffey.

Coffey grew up pro-life. He was 13 when Roe v. Wade passed and his parents explained to their five sons and four daughters the catastrophe that had overtaken America. The family regularly attended the March for Life and pro-life events.

He’d never heard of rescue, though he later found out his sister had been arrested.

“That’s when I knew I had to come back to the States,” Coffey said. “I wasn’t sure why I was coming back or what I would be doing, but I knew I wanted to get involved with that rescue movement.”

Rescue those led to slaughter

Based on Proverbs 24:11–12: “Rescue those being led to death, hold back those staggering toward slaughter,” rescues involved pro-lifers placing their bodies nonviolently between the abortionists and their intended victims, preventing any killing and taking any violence onto themselves.

The movement grew out of nonviolent direct action pioneered in the late ’70s by John Cavanaugh-O’Keefe. In the late ’80s, the movement was expanding rapidly, galvanized by the exceptional witness of Joan Andrews.

Andrews, who famously went limp and refused any cooperation with a system that allows abortion, had several charges pending and hundreds of arrests on her record when she entered an abortion clinic in Pensacola, Florida in early 1986 and unplugged an abortion suction machine.

She was convicted of burglary, resisting arrest, and criminal mischief and sentenced to five years, and because of her non-cooperation, she was incarcerated in solitary confinement in a maximum-security Florida prison, until the state’s governor, under public pressure, commuted her sentence in October 1988.

Coffey had returned from Europe a month earlier.

“I came back on September 1, 1988, and 10 days later, on September 10, which happened to be my mother’s birthday, I got arrested for the first time at an abortion clinic in Delaware with about 100 other pro-lifers from Philadelphia,” he recalls.

“It was very scary at first. The state troopers showed up, they said, ‘You gotta move,’ and we said, ‘No.’ We sang, we prayed, and they literally dragged us across the driveway on the asphalt. It was actually kind of painful,” said Coffey, who is six foot two and 200 pounds.

“We were released a couple hours later. That started my two years of rescuing.”

During that time, Coffey was “arrested about a dozen times” in Philadelphia, Harrisburg, Pittsburgh, New York, Atlanta, and Delaware, including “one famous Good Friday rescue” when “my mother was arrested with seven of her children in Philadelphia. It was wonderful, really great.”

Coffey’s mother, who died four years ago, “said it was one of the happiest moments of her life.”

His longest stint in jail was a week in Atlanta with several hundred pro-lifers and the legendary Fr. Norman Weslin, founder of the elite itinerant rescue community the Lambs of Christ, who often locked themselves to abortion equipment and refused any cooperation with authorities when arrested.

Weslin, who died in 2012 at age 81, was jailed more than 70 times. His last arrest was in 2010, during a protest of Obamacare at the Washington office of House Speaker Nancy Pelosi.

That week in the Atlanta jail included “Mass, prayers, the rosary, singing,” Coffey recalled. “It was the best retreat of my life.”

Into the priesthood, caring for souls in combat

But it was another retreat, in the traditional environment of the Malvern Retreat House in southeast Pennsylvania’s rolling hills, that spelled the end of Coffey’s rescuing days.

“I saw a statue of Jesus kneeling in the Garden of Gethsemane,” he says.

By the time Coffey was ordained in 1996, large-scale rescues had also come to an end, stymied by President Clinton’s 1994 Freedom to Access to Clinic Entrances (FACE) Act, which made it a crime to block the doors of an abortion clinic.

While in seminary, Coffey’s life took yet another turn when he was recruited to the military chaplain candidate program.

He remained a reservist, and after five years as a parish priest, he asked Archbishop Anthony Bevilacqua if he could “go on active duty as a Navy chaplain, because there’s a great need for priests in the military.”

Coffey was with the Marines at Camp Leatherneck in Helmand Province, Afghanistan, for seven months.

“I did a lot of praying, a lot of rosaries and Masses for the troops,” he said. “I was on two different aircraft carriers, the George Washington and Ronald Reagan, as well as shore-based duty.”

“It can be dangerous, but it’s a great place to be a priest to serve the needs of the servicemen and women,” Coffey said. “Pray Mass for them, hear confessions, counsel, and take care of them, take care of their spiritual needs.”

And although he had to stop rescuing when he entered the seminary, Coffey kept up his pro-life witness and efforts to save women and children from the violence of abortion.

He prayed outside the local hospital on Friday afternoon with a group of seminarians, prayed in front of Planned Parenthood abortion facility before his ordination to the priesthood 23 years ago, and prayed at Planned Parenthood before being ordained a bishop.

And it’s been his “usual practice” during his two and a half years as chaplain at Marine Corps Recruiting Depot in San Diego “to pray the rosary with some of our sidewalk counsellors and offer support to women in crisis” outside the Planned Parenthood abortion center on Saturday.

“I was there last Saturday for the first time as a bishop,” he said. “I would just encourage other priests to do that.”

Coffey is also on the board of LIFE Runners, which he joined in 2012 after meeting founder Dr. Pat Castle, then a bio-environmental engineer at Scott Air Force Base, Illinois, at a pro-life event in St. Louis.

“The minute I heard about LIFE Runners, I said, sign me up,” Coffey said.

“I’m not a real big runner or anything like that,” he admitted, adding that Philadelphia’s was the only marathon he’s run. “That’s much too long for me. I’m more a 5K kind of guy.”

But “the point is anyone can be a LIFE Runner… the idea is to get the message out, it’s public witness, and to pray,” Coffey said.

“Running is optional. Simply sign up, order a REMEMBER The Unborn jersey, and wear it as a public witness,” agrees founder Castle, whose group now boasts “11,000 LIFE Runners ages 0.1 to 101 in all 50 states and 38 nations, including Canada.”

LIFE Runners “are encouraged to wear their jersey on the first Wednesday of each month for powerful Pro-Life synergy. “LIFE Runners run and walk local races, our annual Fall Marathon, and the annual A-Cross America Relay,” explained Castle, who is elated at Coffey’s ordination.

“Bishop Coffey is such a good shepherd who is All In Christ for Pro-Life!” he told LifeSiteNews. “He is totally Pro-Life, from praying at abortion facilities to feeding the homeless to loving the elderly.”

Now that he’s an auxiliary bishop, Coffey will retire from the Navy in the next few months and move to the Baltimore area to take up new duties. He’s looking forward to being closer to his siblings and 46 nieces and nephews, as well as 12 “greats” — so far.

Right now, he’s enthused about Unplanned, the hit movie about former Planned Parenthood employee Abby Johnson, which he encourages everyone to see. “A lot of people are seeing the truth maybe for the first time about Planned Parenthood,” he said.

Coffey emphasizes that a team effort is needed to stop abortion in America.

“I applaud the efforts of Shawn Carney and 40 Days for Life, and Abby Johnson with her ministry And Then There were None,” Coffey said.

“We’re all in this together,” he said. “I like to quote Fr. Frank Pavone of Priests for Life, to make abortion not only illegal, but unthinkable, just like slavery.”

At the same time, in a Church rocked by scandal, Catholics need to remember the call to personal holiness, he says.

“The Church is ever ancient, ever new. It’s been around for over for 2,000 years, was founded by Christ who is God, so it’s holy, but it’s made up of people who do sometimes very sinful things and is always in need of reform,” he said.

“So we have to be vigilant. We all of us have to strive for holiness: all of the laity, priest, bishops, religious,” Coffey said.

“As a bishop, I’ll just be encouraging that.”