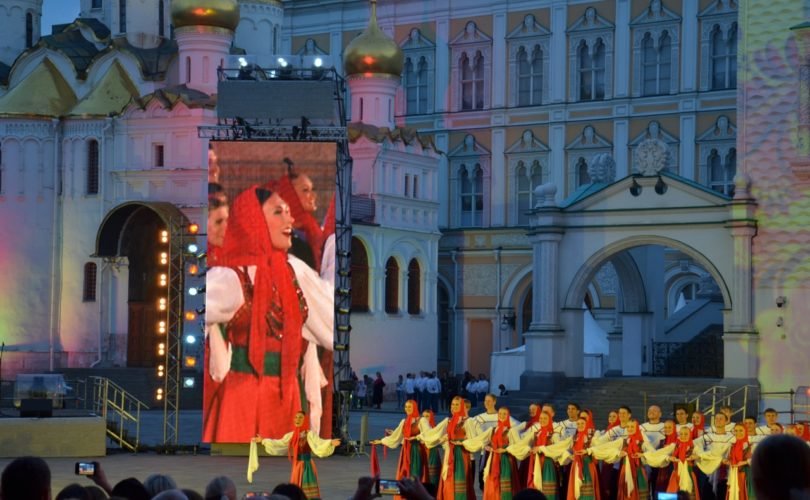 Twenty-five years ago, when the Communist Party of the Soviet Union was still holding its conventions in the Kremlin under the iconic hammer and sickle, no one would have dreamed what would happen there on September 10 and 11, 2014: Inside the Kremlin, the heart of Russia, a two-day international conference was held with the title “Large Families and the Future of Humanity” — pro-life, pro-family, aiming to protect the moral foundation of family and society.

Powerful, influential people were on the podium: Patriarch Cyril, primate of the Russian Orthodox Church (ROC), his foreign affairs representative Metropolitan Hilarion; the grand mufti and chief rabbi of the Russian Federation; Elena Mizulina, chair of the Russian parliament’s Federal Assembly of the Committee of Family, Women and Children, sponsor of the law on “protection of children from information negating traditional family values”; Oligarch Vladimir Yakunin, confidant of President Putin, and his wife Natalia Yakunina, both chair of the Andrew the First Called foundation, who is the official organizer of the Forum; Konstantin Malofeev, chair of the St. Basil the Great foundation. Sharing the podium were high-level politicians from Hungary, France, Nigeria, Greece and the Philippines. President Putin sent a greeting, and Archbishop Paglia, head of the Pontifical Council for the Family, sent a video message. Attendees included more than a thousand people from all parts of Russia and from 50 countries around the world — many were key players in the current culture wars.

The people in the hall certainly don’t agree on Putin’s behavior in the Ukraine conflict. They do agree, however, that we are in a global anthropological crisis that is attacking the nature and identity of the human person, and they share the same determination to rise against it.

The topic here was not simply the family, but large families, because they can reverse the demographic crisis that threatens the future of Russia, not to mention that of most countries in the West. However, here the problem and its causes were put out in the open: U. S. journalist Donald Feder, advisor to the World Congress of Families and a wise, practicing Jew, said, a false perception of sexuality is the cause of the demographic crisis, specifically the idea that sexuality is for enjoyment only and must have no consequences.

On the contrary, sexuality’s foremost purpose is the creation of human life in the bond of love between man and woman. Because pills and condoms cannot always obstruct this creative force, we kill 50 million unborn children around the world every year. And we continue to do so despite the obviously menacing consequences, because we have a false concept not only of sexuality, but also of freedom. This false freedom knows nothing but the autonomous, commitment-free, self-defined individual, fed by gender ideology that denies God and nature.

After a buffet, at which no one would have noticed that Russia is starting to suffer under its own agricultural sanctions, there was a spectacular show among the Kremlin’s three cathedrals. The golden onion domes lit up in the evening sun, the play of light added enchantment to the facades, and choirs, dancers and singers celebrated life and homeland.

The second day’s enormous program took place in the conference rooms of Christ the Savior Cathedral, the “St. Peter’s Basilica” of the Russian Orthodox church. In 1931, Stalin had the cathedral leveled and replaced with a public swimming pool. It was reopened for the 2,000th anniversary of the birth of Christ.

Parliamentarian Olga Batalina spoke about the successes of Russian family policy: Improved parenting skills, a ban on abortion advertising, extending the abortion waiting time to a week, and offers of counseling and assistance during this time. There is also a generous state subsidy for the second child. And the five-year results? Thirty percent fewer orphans, an increase in the birth rate from 1.3 to 1.7 children per woman during the same period.

Leaders of the international pro-life and pro-family movement gave 10-minute presentations. It would have been interesting to hear something from the Chinese representative about their country’s one-child policy, but that might have been inopportune.

In fact, for any person from Western countries it was inopportune to speak at this Forum. The Human Rights Campaign, the largest LGBT organization in the U. S., promptly reacted: They demanded that the U.S. Department of Treasury investigate the World Congress of Families to see if they had violated sanctions against Russia. Originally, it was actually the World Congress of Families that wished to hold its international conference in Moscow this year, but due to the Ukraine conflict they gave the event over to the Russian hosts.

Thomas Ward, President of the National Association of Catholic Families in England spoke of a “brutal culture of planned demographic collapse”. He said our culture’s Achilles heel is parental rights. Only parents can protect their children and guard them against sexual indoctrination in the schools.

In the afternoon, there were ten roundtable discussions each with 20 or more speakers. Each was to give his message within seven minutes – no time for questions or discussion. However, the organizers evidently wanted to make the knowledge of international experts on the culture of life available to Russia. Elena Mizulina says, “Russia has decided. It is holding on to traditional family values. All religions in the Russian Federation are for the family. Ninety-five percent of the population rejects same-sex partnership. But the U. S and the Western nations are waging ideological war against us.”

Everything discussed here is to be published on the Internet (www.st-andrew-foundation.org). Natalia Yakunina believes that because the forum is taking place in the Kremlin, all of Russia will hear the message.

The migration of ideology and its consequences is astounding. In 1884 Friedrich Engels, the collaborator of Karl Marx, saw in the “antagonism” of man and woman in monogamous marriage the first “class-conflict”. In 1917, Alexandra Kollontai, the first female commissar of the Soviet worker’s council set about the sexual-political destruction of the family. However, even Lenin had to repeal the agenda — to the frustration of Western communists like Wilhelm Reich — because it caused social chaos that stood in the way of creating his socialist utopia.

The communist agenda migrated westward and gained a full head of steam in the 1960s student rebellions, marching through the institutions to the very top. Today deregulation of sexual norms for the purpose of destroying the family is being implemented around the world by the United Nations and the European Union and their network of NGOs, billionaires’ foundations and corporations.

However, in 2014, Russia, under the pressure of the demographic crisis, sets the course for family and its ethical foundations, recognizing, as it is said in the program: “Humanity must move forward into the future based on the understanding that the natural family has been and remains the foundation of civilization; and the family was – and still is – and forever will be the marriage between man and woman with many children.”

Gabriele Kuby participated in the conference as a speaker.

Gabriele Kuby, German sociologist, book author and international speaker. Her main issue is the ideology of genderism which undermines the family and democratic liberty. Her latest book, Die globale sexuelle Revolution – Zerstörung der Freiheit im Namen der Freiheit, (The Global Sexual Revolution – Destruction of Freedom in the Name of Freedom) has become an instrument of resistance in many countries.