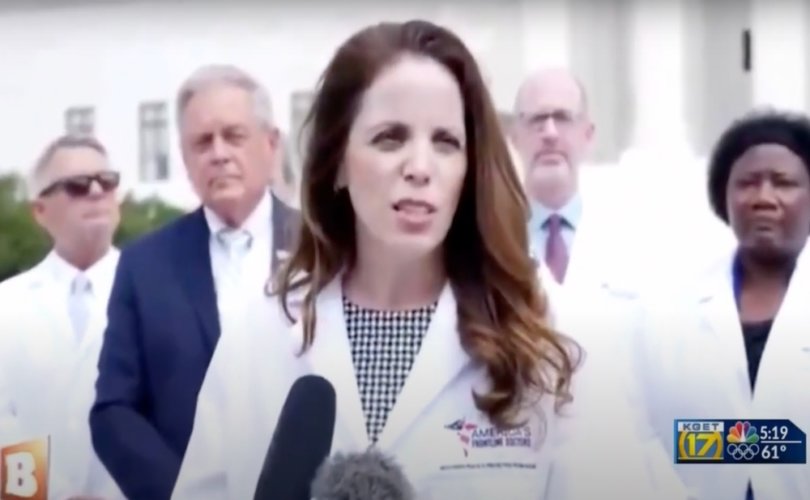 (LifeSiteNews) — Simone Gold, M.D., J.D., founder of the advocacy group America’s Frontline Doctors (AFLD), was sentenced Thursday to 60 days in prison for being present during the January 6, 2021 riot at the U.S. Capitol.

Gold, a former emergency room doctor and an early opponent of draconian COVID-19 lockdowns and mandates, was charged with one misdemeanor count of “entering and remaining in a restricted building or grounds” for being in the U.S. Capitol building as protesters objected to the certification of the 2020 election and some engaged in violence and property damage.

Gold’s attorney, Kira Anne West, stated that her client pleaded guilty to standing “with a crowd outside the East Rotunda door, where she eventually entered shortly after about 2:27 p.m. along with her co-defendant John Strand. She remained inside the Capitol for a little over half an hour. Around 2:55 p.m., she gave a speech at Statuary Hall stating her opposition to COVID-19 vaccine mandates and government-imposed lockdowns,” MedPage reported.

In addition to being sentenced to 60 days behind bars, Gold also faces 12 months of supervised release and $9,500 in fines, which CNN noted is “the largest fine imposed to date among the almost 200 rioters who have been sentenced.”

Dr Simone Gold was sentenced to 60 days in a federal prison for entering Congress after the doors were opened from the inside, then leaving when asked to leave. https://t.co/j9dzxjPn2D

Left-wing media outlets have accused Gold, who is scheduled to appear at LifeSite’s 25th anniversary gala in August, of spreading “misinformation” for challenging the prevailing COVID-19 narrative. Far-left outlet Mother Jones has characterized her as an “insurrectionist” for being present to give a speech on January 6.

However, AFLD argued Thursday that “unlike the vast majority of January 6th protesters, Dr. Gold was not even there for political reasons.”

Gold, who had participated in a press conference on the steps of the U.S. Supreme Court in July 2020 where she blasted the authoritarianism of the COVID-19 response, attended the January 6 rally to continue her work advocating for medical freedom and free speech, according to an AFLD press release shared with LifeSiteNews.

According to the press release, Gold had been “scheduled to speak on January 6th alongside numerous other presenters after President Trump’s appearance at the rally, which had a government-approved permit.”

“At her expected start time, Dr. Gold was then told all speeches were suddenly canceled without explanation. Upon hearing this, Dr. Gold was amongst thousands swept into the Capitol building when the doors were opened from the inside, with law enforcement officers ushering people in. While there, Dr. Gold realized it was the only remaining moment to deliver her message to those who came to hear it, and so she gave her remarks there.”

The release added that when officers ultimately asked Gold to leave the building, “she did so, immediately.”

While videos taken during the January 6 protests showed people engaging in physical altercations and causing property damage, other videos showed that many people were let into the Capitol by police and simply walked around the building.

According to Cooper, the more than $400,000 raised by AFLD to help with Gold’s hefty legal expenses is “unseemly” and a “disservice to the true victims that day,” CNN noted.

The judge’s comments come in spite of the fact that Gold has not been found guilty of engaging in violence during the January 6 protest. Moreover, the only person directly killed during the protest was unarmed Trump-supporter and Air Force veteran Ashli Babbitt, who was shot and killed by a Capitol police officer.

In the AFLD news release shared with LifeSite, the organization argued that “[a]s we consider the results of Dr. Gold’s sentencing, one thing is clear: We are still far from the change that is needed. The Constitution is crumbling before us, and we must continue to stand for what is right. We will never cower to government threats and harassment.”

Gold’s sentencing comes amid the highly partisan January 6 Committee’s primetime hearings in which Democrats have continued to assert that pro-Trump protesters engaged in an “insurrection” on January 6, presenting a grave threat to American democracy.

Gold wasn’t the first high-profile figure to face legal action amid the hearings, which former President Donald Trump has blasted for being a “political witch hunt.”

Last week, Republican gubernatorial candidate Ryan Kelley was arrested by the FBI for being present during the riot at the Capitol.

Earlier this month, former top Trump adviser Peter Navarro was arrested by the FBI for refusing to testify before the January 6 Committee, just hours after vowing to fight the charges, and a single day after promising to help the House GOP impeach U.S. President Joe Biden.

In the AFLD press release shared with LifeSite, the organization argued that the federal government under the Biden administration has “aggressively violated” the civil rights of January 6 protesters “at nearly every turn.”