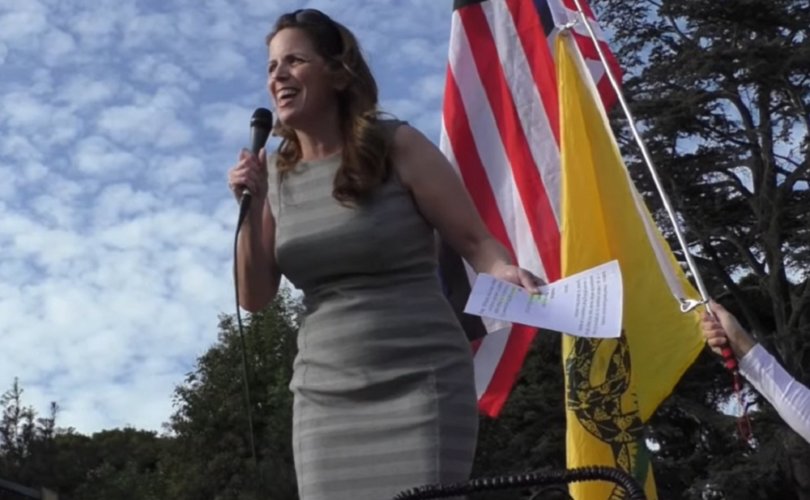 January 21, 2021 (LifeSiteNews) — Simone Gold, M.D., J.D., founder of the advocacy group America’s Frontline Doctors, was arrested on Sunday for having entered the U.S. Capitol on January 6, the Department of Justice (DOJ) revealed. The DOJ added that she was “released on conditions” and has a virtual hearing scheduled for Thursday.

America’s Frontline Doctors is a group of medical professionals who work to promote early COVID-19 therapies and to expose the influence of pharmaceutical companies on treatment protocol for the coronavirus.

Federal agents arrested Gold in California days after she publicly admitted that she had followed other protesters into the Capitol building two weeks ago, as Congress was scheduled to certify the 2020 presidential election. Officials also arrested John Strand, the communications director for America’s Frontline Doctors, who had joined Gold at the Capitol.

“I can certainly speak to the place that I was, and it most emphatically was not a riot,” Gold told the Washington Post in an interview on January 12.

She noted that she had traveled to Washington, D.C. to speak at a “Rally for Health Freedom” on the east side of the Capitol. “Where I was was incredibly peaceful,” Gold said, adding that she thought protesters were legally entering the Capitol building.

Widely viewed footage from the Capitol on January 6 shows police removing barricades for protesters and standing by as they wander through the building. The DOJ has stated that there is no direct evidence that protesters intended to kill or capture lawmakers.

Photos and video cited in the affidavit supporting Gold’s arrest warrant appear to show her walking through the doors of the Capitol building amid a crowd of protesters and giving a speech in Statutory Hall. While Gold was charged with “violent entry and disorderly conduct,” the affidavit never claims that Gold or Strand acted violently.

Gold estimated that she spent 20 minutes inside the Capitol building before police ushered her out. She delivered part of a speech that she had given at another rally in D.C. the day before, in which she labeled the COVID-19 vaccine “an experimental biological agent.”

“If you don’t want to take an experimental biological agent deceptively named a vaccine, you must not allow yourself to be coerced,” she said on January 5. “If you are living in fear of a non-lethal virus, simply buy the same ordinary medicines used across the world.”

Though vigorously defended by the media and health officials, COVID-19 vaccines have been linked to at least fifty-five deaths in the United States so far. Last, month, the Centers for Disease Control acknowledged that 3,150 people reported experiencing “health impact events” after taking the vaccines.

Chinese health experts recently called for the suspension of mRNA COVID-19 vaccines, like those made by Moderna and Pfizer, after more than a dozen deaths were tied to the vaccines in Norway.

COVID-19 vaccines may not even provide immunity to the virus for many recipients, according to a study submitted by South African researchers, which found that the vaccines’ effectiveness may drop substantially as new COVID-19 strains spread.

“More research into the vaccine’s safety and effectiveness, including questions about pathogenic priming resulting in sudden severe cytokine storm and possible fertility side effects in women of childbearing age, is necessary,” the group said in a press release from December.

“Mandates must be void as a matter of public policy. Coercion to take an experimental biological agent cannot ever be justified on scientific grounds,” the press release reads.

“There’s been no proof that this is actually reducing mortality, certainly from the levels of non-lethality that we’re seeing. It would be hard to demonstrate that there’s any real advantage” to taking the vaccine, Gold said in a speech earlier this month.

Gold and her colleagues also emerged as early, forceful critics of the use of lockdowns to stop the spread of the coronavirus. The lockdown approach, which decimated the U.S. economy, was medically discredited in a peer-reviewed study published by Stanford University on January 5.

Last year, Gold made headlines for penning an open letter to President Trump signed by over 500 physicians that lambasted lockdowns as “a mass casualty incident.” “It is impossible to overstate the short, medium, and long-term harm to people’s health with a continued shutdown,” Gold wrote.

CDC data show that lockdowns coincided with the highest increase of overdose deaths during the deadliest 12-month period for drug-related fatalities ever recorded in the U.S. Shutdowns also have been linked to unprecedented rises in mental health disorders across all age groups.