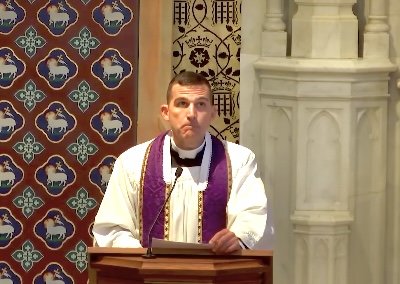 Fr. Daniel Nolan, an FSSP priest at Our Lady of Mt. Carmel Church in Littleton, Colorado, offered a powerful homily on Dec. 19.YouTube

LITTLETON, Colorado (LifeSiteNews) — A traditional Catholic priest with the FSSP delivered a powerful homily on December 19 about the falsehoods and lies that society has been fed about COVID.

Fr. Daniel Nolan, a priest at Our Lady of Mt. Carmel Church, said Christ is the “the source of reality” and anyone who departs from that is going to end up in “delusion.”

This is what happened with the political response to COVID, which has included massive lockdowns, forced masking and vaccine mandates, Fr. Nolan said.

“We’re going to look at what has happened over the past two years and notice what do we see? What do we suspect? Because by your fruits you can know them,” Fr. Nolan said.

“If Christ is behind something, you’re going to see that. But Satan being the Prince of Darkness and the Father of Lies, you’re going to notice that as well. If you start to see a bunch of lies, you can probably be certain Satan’s behind it,” the FSSP priest said.

He said that COVID-19 is a serious disease and should be taken as such, but the political response has been “completely unwarranted and unjustified by the level of danger this virus poses.”

He said some of the “signs of Satan” in the response included the initial response from President Donald Trump’s White House and Anthony Fauci that just a few weeks of lockdowns were needed to “flatten the curve” so healthcare infrastructure could be ramped up to accommodate.

Then, Fr. Nolan noted, there was the back and forth on masks, with Fauci and Surgeon General Jerome Adams saying that masks were not needed, before public health leaders admitted that they did not want non-healthcare personnel buying masks that nurses and doctors needed.

“If you know they will lie to you for your own good what so what are they lying to us about now right? That’s what we should be asking ourselves,” the priest said.

Other lies or falsehoods include counting people who died with COVID as dying from COVID, at least partially driven by the added payments hospitals received for treating people with COVID, the unreliability of COVID testing and how the government used the supposed deadliness of COVID to mandate vaccines.

He also discussed the World Economic Forum and the Great Reset and how what was once derided as a conspiracy theory is now being openly discussed.

“You’re not going to own anything in the future because we’ll own it all but we’ll give it to you fairly and equitably and that’s going to be great,” he said in reference to a World Economic Forum video.

“That’s not a conspiracy theory, they’re telling us that they’re having forums and saying this is where the world is going. And guess what they’re saying? COVID-19 is a great place to start. We’re going to take advantage of what’s happening and bring the world to this one world government,” Nolan warned. “That’s what they’re trying to do.”

“I encourage you actually not to get the vaccine,” Fr. Nolan said after commenting on the Vaccine Adverse Event Reporting System (VAERS).  “But don’t feel pressure. That’s the important thing, do not be bullied or pressured or guilted into something you really feel this is not true.”

“Don’t live in a delusional world,” he said.