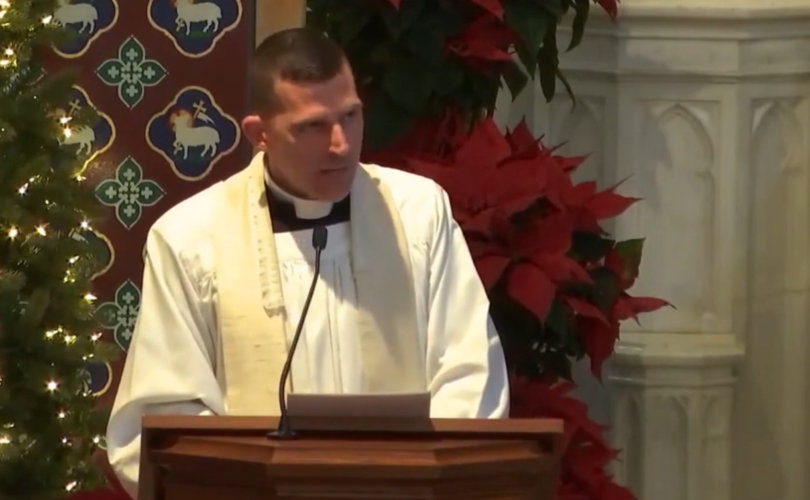 LITTLETON, Colorado (LifeSiteNews) — A traditional Catholic priest said the oppression of unvaccinated people through the use of vaccine mandates constitutes crimes against humanity and violates Catholic Church teaching.

“This is where I see the failure of the current response to the COVID-19 crisis: The unvaccinated have become the target of injustice, hostility, and aggression, depriving them of their basic human rights,” said Fr. Daniel Nolan, FSSP, of Our Lady of Mount Carmel parish in Littleton, Colorado. “No group of any kind can be excluded from basic human rights, not even the social group of the unvaccinated.”

Nolan said that one of Vatican II’s documents, Gaudium et Spes, articulates the fundamental and inviolable rights of each person that must be safeguarded in a civil society. He also noted that the Catholic Church teaches that it has a duty to protect persons and their rights, and so the Gospel compels him to speak out against the unconscionable discrimination being perpetrated against unvaccinated persons.

“In the name of public health, people have had their lives and livelihoods destroyed, their employment terminated, their privacy invaded, their freedoms crushed, their dignity removed, their opportunities curtailed, their quality of life suppressed — all because they will not obey their government’s orders.”

“This is the real crisis,” he continued.

Nolan observed that a “campaign of fear” has been waged upon the world to create a climate in which people will accept compromises they would not normally accept in calmer times. The upshot of this messaging is for humanity to embrace the experimental COVID-19 vaccines as a “cure-all, the panacea that will solve all of our problems.”

However, he described the underlying reality of this proposal as much different: “I see irresponsible, unethical, unjust measures forced upon an unwilling populace,” measures based on a “stream of lies,” consisting of “contradictions, the obfuscation of facts, the misrepresentations of truth, [and] gross exaggerations.”

“And then we were told, vaccines are necessary. Everyone and everywhere.”

Despite natural immunity to COVID-19 being superior to the novel vaccines, concerns regarding allergic and other reactions to the abortion-tainted inoculations, and an increasing amount of so-called breakthrough cases among the vaccinated, Nolan said leaders refuse to consider veering from the path of universal vaccination.

“[T]here have been over 10,000 deaths caused by the vaccine, 30,000 permanent disabilities, 80,000 serious injuries, and hundreds of thousands of adverse affects,” he continued. “Despite the fact that an increasing number of children are suffering from heart disease and even death due to the vaccine — all we hear, ‘All must be vaccinated.’”

Nolan underscored the seriousness of the draconian measures against the unvaccinated by reading an August 25, 2021 letter from a group of Holocaust survivors to the European Medicines Agency:

We the survivors of the atrocities committed against humanity during the Second World War, feel bound to follow our conscience and write this letter.

It is obvious to us that another holocaust of greater magnitude is taking place before our eyes.

We call upon you to stop this ungodly experiment on humankind immediately.

The majority of the worlds’ populace do not yet realize what is happening, for the magnitude of an organized crime such as this is beyond their scope of experience.

We however do know.

In addition to the current government abuses and social ills visited upon the unvaccinated, Nolan also referred to the complicity of the Catholic Church.

“Not only is it shameful enough that the Catholic Church stood by on the sidelines and said nothing when these injustices were taking place, but she has actually dared to join them.”

“Holy Scripture tells us there’s only one unforgivable sin, the Sin against the Holy Ghost,” he continued. “But apparently some church leaders have discovered a new unforgivable sin — refusing to be vaccinated.”

In closing, Nolan asked the faithful to pray for courage for bishops and priests to denounce the persecution of one segment of society, lest it repeat the horror of concentration camps.

“And so I pray, and I beg you to join in my prayers that more priests and more bishops will wake up to the reality of what is happening in our world right now and speak out against it. These violations of human rights cannot be permitted to continue. It is precisely in times such as these that tyranny emerges and the Church let’s it happen.”