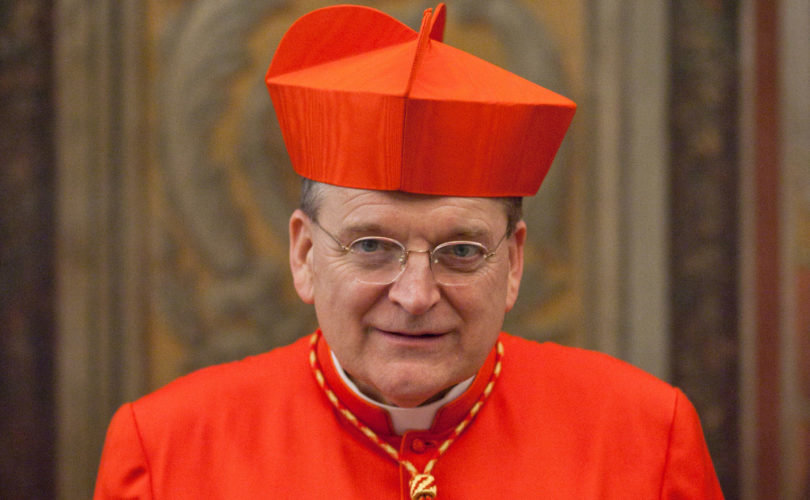 December 19, 2016 (LifeSiteNews) – In the following exclusive interview conducted with LifeSiteNews over the weekend, Cardinal Raymond Burke, patron of the Sovereign Military Order of Malta, discusses the dubia he and three other cardinals submitted to the Pope seeking clarity on Amoris Laetitia.

He gives more details on the eventual “formal correction” of the Pope, if Pope Francis fails to respond, and gives important advice to the faithful on how to respond to attacks against them emanating from Rome.

LifeSiteNews: You have spoken about a potential upcoming formal correction of Pope Francis, should he continue to refuse to answer the dubia expressed by you and the other cardinals – with the vocal support of numerous theologians and tens of thousands of faithful. When would such an action take place, and what would it look like? Can you describe that for us?

Cardinal Burke: Well the dubia have to have a response because they have to do with the very foundations of the moral life and of the Church’s constant teaching with regard to good and evil, with regard to various sacred realities like marriage and Holy Communion and so forth. What format it would take is very simple; namely it would be direct, even as the dubia are, only in this case there would no longer be raising questions, but confronting the confusing statements in Amoris Laetitia with what has been the Church’s constant teaching and practice, and thereby correcting Amoris Laetitia. It’s an old institute in the Church, the correction of the pope. This has not happened in recent centuries, but there are examples and it’s carried out with the absolute respect for the office of the Successor of Saint Peter, in fact, the correction of the pope is actually a way of safeguarding that office and its exercise. When will it take place? Now of course we are in the last days, days of strong grace, before the Solemnity of the Nativity of Our Lord, and then we have the Octave of the Solemnity and the celebrations at the beginning of the New Year – the whole mystery of Our Lord’s Birth and His Epiphany – so it would probably take place sometime after that.

LifeSiteNews: It has become painfully obvious that in making negative statements about the rigid, sick, doctors of the law, the all-or-nothing people that are either ‘heretical’ or ‘not catholic’ – in making such derogatory remarks, the Pope refers to you along with the faithful, even young people who would seek to defend traditional teachings of the Church on moral issues, and who love traditional liturgy. What can you say to help the many faithful clergy and laity, especially youth, who hear the hurtful things in the comments made by Pope Francis?

Cardinal Burke: My response is simply that we believe in Our Lord Jesus Christ – alive in His Church, in her teachings, in her sacred liturgy, in her life of prayer and devotion, and in her discipline, as those have been handed down to us in an unbroken line from apostolic times. And so, even though these statements are very hurtful, and I understand that, we have to rise above those feelings of hurt and adhere ever more strongly to what the Church teaches, to her sacred liturgy, to our life of prayer and devotion, and to that discipline, which safeguards and promotes our life in Christ. And so I just encourage the faithful not to become discouraged, not to let themselves in some way be intimidated by these kind of statements, for they know Our Lord in His Church, and they have good spiritual guides to keep them close to Our Lord. And therefore studying the faith and entering as fully as possible into the liturgical life of the Church, and striving to lead a life disciplined by the faith, they will remain strong.

LifeSiteNews: What is the obligation of the faithful laity now in this time of great turmoil in the Church? What can they practically do, beyond, of course, prayer, to help rectify the current situation of damaging confusion that is even causing scandal among their children? For example, when they hear the Pope and those close to him saying one thing – while what their parents say is very different – and often these are contrary to the teachings of Pope St. John Paul II?

Cardinal Burke: Well we have to make a distinction between two voices or two bodies of the person who is Pope. The one voice, the one body, is that of the Vicar of Christ on earth. And that voice we hear when the Pope announces what the Church has always taught and practiced, promotes it, or helps us to understand and apply it in our daily lives. The other voice, the other body, is that of the man, who can have many thoughts and make many statements, which are not related at all to the exercise of the Office of Peter. And so when the Pope seems to say things that are contrary to the teaching of the Church, then it’s not reasonable, neither is it an expression of faith, to cling to those kind of statements as if they were the exercise of the papal magisterium. And this way, parents can help their children to sift out what is the heart of the faith, what is that one teaching-one sacraments-one discipline, which is our life in Christ – from other statements or writings that aren’t an expression of that faith and sacramental life and discipline.

LifeSiteNews: How can Catholics respond to specific instances of confusion that generate from the Pope himself, for instance when he said cohabitation is real marriage and has the grace of real marriage, or when he had invited a lesbian couple to the Vatican – with one of the pair having had a sex-change operation to appear as a man – and referred to this couple as “married and happy”? How can Catholics respond when he says such things so they don’t appear to be criticizing the Pope simply for the sake of being critical?

Cardinal Burke: I think the important thing for us as Catholics is simply to affirm once again what the Church has always taught and practiced. And we have in the Catechism of the Catholic Church and in other papal documents – for instance Familiaris Consortio, the apostolic exhortation of Pope Saint John Paul II, Veritatis Splendor, his encyclical letter on the moral life – we have these secure teachings, and it’s important then to give witness to those teachings, to express them, to know them ourselves, and then simply to say, “But this is what the Church teaches,” no matter what the media or others are saying, or even if some quote from the Pope himself seems to say otherwise. We need to give witness to what the Church has always taught and practiced, and that way we remain serene, we don’t give way to confusion, and even division as it can often happen in the Church otherwise.

Cardinal Burke: I can’t speak for others with regard to a possible atmosphere of fear, all I can say is this, that for me, I know what my duty is as a bishop and above all as a cardinal, who is one of the principle advisors of the Holy Father in his office of preserving and promoting the great tradition of the faith, such fear and such intimidation, as it may exist from time to time, simply can’t be a consideration with regard to what I need to do. I need to listen to what my conscience tells me with regard to the objective Truths of our faith and how best to defend them and promote them. If such an atmosphere exists, certainly it could generate a silence on the part of some. One thinks for instance of the case of St. John Fisher in England at the time of King Henry VIII, when he was the only bishop who upheld the Truth of the faith, who defended Christ and His Holy Church. Some obviously tried to discourage him from doing that, pointing out that he was the only one. And he rightly responded that even if he was the only one, the important thing could only be that he is speaking for Christ and fulfilling his duty as bishop. St. Paul says in the beginning of the Letter to the Galatians that even if an angel from heaven arrives announcing something different from what is taught in the Church, let it be an anathema, in other words, that false teaching should be condemned. The Truth of the faith comes to us through the apostolic authority, and that we have to remember and keep clear in our minds.

LifeSiteNews: What other thoughts, Your Eminence, do you have for the faithful in these days of confusion, but also this season of Advent as we approach the Solemnity of Our Lord’s Nativity?

Cardinal Burke: Precisely the season of Advent to which you have just alluded gives us a very solid direction and also source of strength, for it is in this season that we celebrate the coming of God the Son in our human nature, who alone is our salvation. We know that our salvation is found alone in Jesus Christ, who is alive for us in His Holy Church. And so, we ought to rejoice in that objective reality. It’s not an idea, it’s not an ideal; it’s a reality. The grace of Christ has been given to us – the outpouring of the Holy Spirit in Baptism and Confirmation – and is nourished within us every time we make a good Confession, restored and nourished in us through a good Confession, and most of all through our participation in the Holy Sacrifice of the Mass. And so in these very troubled times the celebration of the Nativity of the Lord should give us a new joy and a new courage in being faithful witnesses to our Lord Jesus Christ, who is alone our salvation. We should have the attitude of Saint Paul, who wrote in the Letter to the Colossians that he rejoiced to fill out in his own body what is lacking in the sufferings of Christ for the sake of His Holy Church. And so too for us we know that Christ’s sufferings are perfect, they have redeemed us, but that what is lacking is that we unite ourselves to His sufferings, that we take up our cross in our time and place in order to be one with Christ in the Truth lived with love. And so I wish for all the faithful a most blessed celebration of the Nativity of the Lord and may this annual celebration confirm all the faithful in their knowledge and love and service of Our Savior Our Lord Jesus Christ in his one, holy, catholic and apostolic Church.