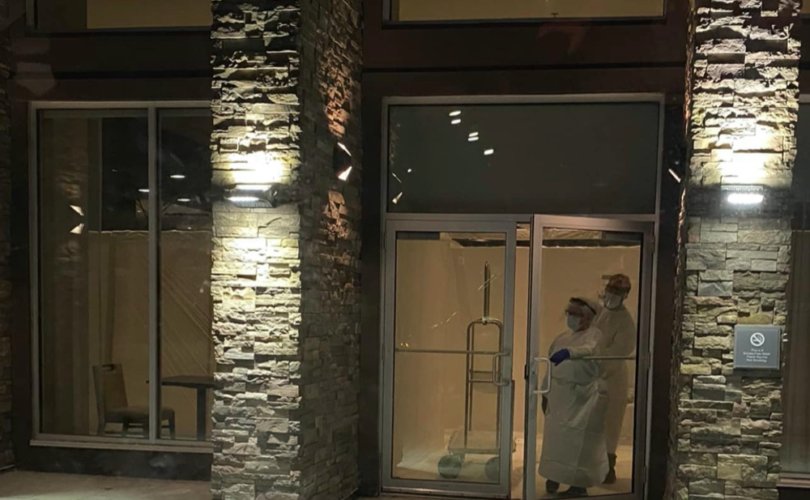 CALGARY, Alberta (LifeSiteNews) – A Canadian mom was forced to stay in a COVID quarantine hotel with her children despite being “fully vaccinated.”

Tiffany Gaura and her family had returned home to Calgary from Egypt.

“This is happening, right now, in Canada, two years into a pandemic to vaccinated individuals. I don’t have the words to express this well. I waver back and forth between rage, embarrassment and disbelief. This will change my life, I have no doubt,” wrote Gaura.

Both she and her accompanying children were coming home to Calgary from a recent trip in Cairo, saying they arrived home early to “complete the new quarantine requirement, given Egypt has been listed as a ‘Country of Concern’.”

“I am FULLY VACCINATED. We had PCR tests in Cairo and Frankfurt. We have an empty home to go to here in Calgary,” wrote Gaura.

However, things turned south when Gaura and her children arrived at the airport. This was due to the new quarantine measures and travel bans to countries like Egypt imposed by the Canadian federal government because of the “Omicron” variant.

Lynn wrote that Canadian Border Services Agency (CBSA) agents interrogated her for 15 minutes regarding her (non-existent) history with COVID, as well as her plans in Canada (despite having a home there) and her vaccination status.

“They read me my rights and told me I was entitled to a lawyer,” Gaura wrote.

“They told me the fine for breaking quarantine is up to $750,000. We had a dedicated escort throughout, ensuring we weren’t escaping,” she continued.

“Secondary unexplained screening at customs, and a PCR on arrival. We weren’t allowed to make any stops or get anything to eat or drink. The whole process took about 2 hours.”

Gaura says she and her family were then transported to the Westin Airport Hotel in Calgary, which the Canadian federal government has contracted out to be used as a secure COVID “isolation site.”

Entry to the hotel is blocked, and Gaura says that, upon entering, they were greeted with “employees in HazMat suits” from the Red Cross before being “processed and taken to an isolation floor.”

“We cannot go outside. We cannot leave our room. We cannot get deliveries or packages. We cannot consume anything from offsite. We only get the meals they send us,” she wrote.

Gaura added that once she and her children get their COVID test results, if they are negative, they must contact the Red Cross to “coordinate with Quarantine Officers for our release.”

She added that even this step can take up to two days, and when they are allowed to return home, they must complete their 14-day quarantine and then take another test on “day 8.”

On December 5, Gaura blasted the Red Cross in a Facebook post, writing, “Next time you think about making a donation to the Canadian Red Cross, keep in mind that your donation dollars are going to things like supervising fully vaccinated travellers in mandatory government quarantine facilities. I’m sure there are other organizations that could use your money.”

The “food is horrible” and has no “nutritional value.”

Gaura has documented her ordeal with a series of videos uploaded to her Facebook page.

In a December 6 post, the young mother wrote that the meals being served are “horrible”;  the food “arrives cold and has limited nutritional value.”

“It’s not FoodSafe for sure. I may call public health,” Gaura remarked.

“No fruits or vegetables (aside from potatoes). No beverages are offered, so it’s tap water for the win. No wait, I did get some coffee filters and packaged creamer. It’s gross.”

Gaura said that her and her family are still waiting for the PCR test results.

“Apparently in Canada it takes 72 hours to get results in 2021. Or maybe they just want us to stay here longer,” she wrote.

Gaura said that the hotel offered a number to call; however, no calls are put “through to our room.”

“When you call [so speak to us], they just say they will pass the message on to the Red Cross who will send us the message. The kids are going stir crazy. No fresh air, no physical activity. We are doing yoga and schoolwork. I brought a few card games, but that can only fill so many hours of the day with no space or freedom to roam,” she wrote.

To make matters worse, there is only one bed in the hotel room, so the entire family must sleep together, Gaura reported

She also said it took an entire day for her to receive feminine hygiene products and that the view from the room is of a “window to nothing.”

“Can’t see the parking lot or any coming and goings from the site. I wonder if they give rooms that have a view to [those things],” wrote Gaura.

As Gaura’s case shows, even those who are considered “fully vaccinated” are now subject to quarantine rules enacted at the whims of the government.

Effective from December 1, the federal government under Prime Minister Justin Trudeau enacted a policy banning Canadians over 12 who have chosen not to get the abortion tainted COVID jabs from traveling by air, sea, or train.

On November 30, the Canadian federal government updated its border measures due to the “Omicron” variant.

On December 7, the federal government mandated COVID shots for all federally regulated sectors.

While Canadian citizens or those with a right to enter Canada  will be allowed to come in regardless of their vaccination status, they will have to undergo “enhanced pre-entry and arrival testing, screening, and quarantine measures.”

Also, the government says that travelers without the COVID jabs “with right of entry to Canada” will have to be tested on arrival “and day 8.” They will then be forced to quarantine for 14 days.

The government says that COVID vaccine-free Canadians who arrive by air will now be mandated to “stay in a designated quarantine facility or other suitable location while they await the result of their on-arrival test.”

However, despite the travel ban for unjabbed Canadians, those who have not taken the COVID inoculations will still be allowed to pass through Canada on connecting flights, says the government. Also, COVID tests are not required for in-transit travelers.

The  COVID jabs approved for use in Canada have also been associated with severe side effects such as blood clots, rashes, miscarriages, and even heart attacks in young, healthy men.

The COVID-19 injections approved for emergency use in Canada, including the Pfizer jab for ages 5 and up, all have connections to cell lines derived from aborted babies.

All COVID jabs are still experimental; their clinical trials will not be completed until 2023.