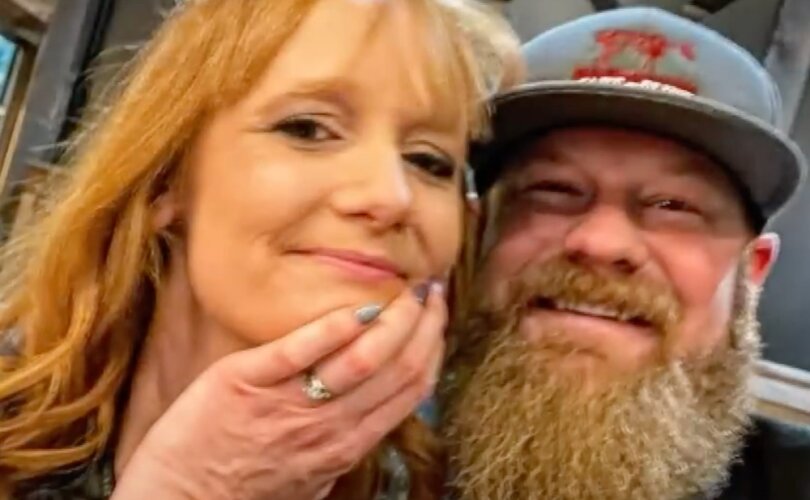 Jake Flint, 37, passed away without warning in his sleep as confirmed by The Oklahoman after exchanging vows with his bride Brenda Wilson Flint at a his rural homestead outside of Tulsa, Oklahoma.

Described as a singer and songwriter of the Red Dirt genre of country music, Flint had released four albums since 2016 and was honored in 2019 as “Breakout Artist of the Year” at the We Are Tulsa Music Awards. The previous year he was featured on the Future Faces Show of the Texas Regional Radio Music Awards.

Brenda Cline, the singer’s former manager and friend, described him in a Facebook post Sunday morning as “the funniest, most hilarious, hardest working, dedicated artist I have ever worked with in my career.” She went on to ask for prayers for “his new wife Brenda, Jake’s precious mother, his sister and the rest of his family and friends.”

Last year, on April 21, Flint posted an Instagram photo sharing some apparent excitement at the prospect of returning to live performances following government COVID-19-related restrictions. The post included an image of the musician’s “COVID-19 Vaccination Record Card” indicating he had received two Pfizer injections within the previous month. He added the comment “Fully Vaxed to the max and ready to make some tracks to Halifax or wherever else.”

Though the correlation of Flint’s COVID-19 “vaccination” with his sudden early death nineteen months later cannot prove causation, it does highlight an ongoing trend of significantly increased death rates which have impacted much of the world since the COVID-19 vaccine roll-out around January 1, 2021.

— Article continues below Petition —
URGENT: Say No to the UK introducing a “right” to abortion
Show Petition Text
10640 have signed the petition.
Let's get to 12500!
Thank you for signing this petition!
Add your signature:
Show Petition Text

In the United States, while the Centers for Disease Control’s passive Vaccine Adverse Event Reporting System (VAERS) received only around 150 annual death reports before 2021, it currently shows 1,467,781 reports of adverse events after COVID vaccines administered between Dec. 14, 2020, and November 18, 2022. This data includes a total 32,370 reports of deaths, 184,290 hospitalizations, and 60,339 permanent disabilities.

And like the findings of BKK ProVita, there’s plenty of evidence that this is just the “tip of the iceberg” considering that a 2010 Harvard-executed study commissioned by the Department of Health and Human Services (HHS) found that “fewer than 1% of vaccine adverse events are reported” in VAERS.

‘If the goal [of the vax] was to reduce the world’s population, it’s working’

Dr. Peter McCullough, an internist, cardiologist, and epidemiologist with 677 articles published in scientific peer-reviewed journals, explained during a late October conference why the experimental COVID-19 gene-based injections should be the presumed cause of unusually high excess death rates around the world.

The former editor of two major medical journals and President of the Cardiorenal Society of America added in a later interview that “the vaccine accelerates death from other causes. So, if someone has cancer, the vaccine accelerates that. If someone has heart disease, one is more likely to have fatal heart attacks and strokes… The vaccines cause blood clotting… The vaccine is incredibly risky, and basically, it’s achieving its goal. If the goal was to reduce the world’s population, it’s working.”

Late Monday night Brenda Flint posted on Facebook a statement that she and her deceased groom “should be going through wedding photos but instead I have to pick out clothes to bury my husband in. People aren’t meant to feel this much pain.” And posting a video of herself and her husband during their wedding on Saturday, the new bride and widow simply wrote, “I don’t understand.”

A staggering number of athletes collapsed during games this past year