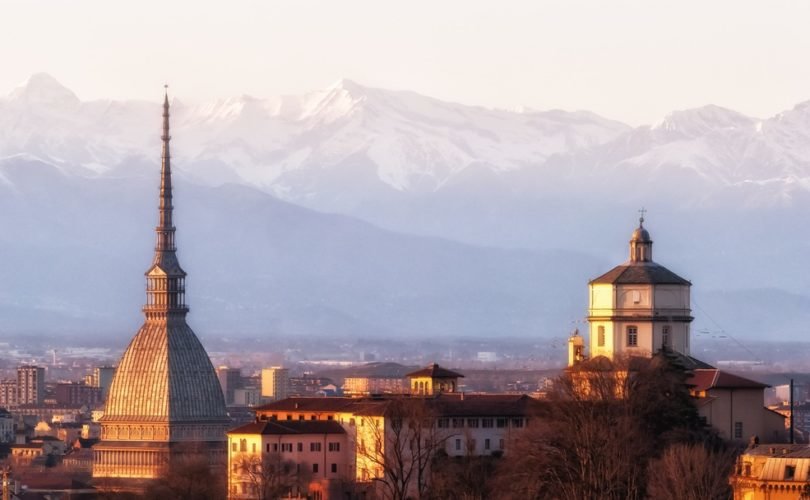 The city of Turin’s decision to pull sponsorship of a homosexualist art exhibition has come under fire from a local councilor who compared it to militant Islamic fundamentalism. The exhibition, scheduled to run September 8 to October 17, is being advertised around the city with a poster featuring a photo of an obese nude woman stepping on a set of Byzantine icons of Christ and the Virgin Mary.

Democratic Party councillor Silvio Viale scolded the exhibition’s critics in the far left national newspaper La Repubblica, saying, “These are specious arguments: it is art, not contempt. It is an artistic provocation and the poster emphasizes the oppression of women and LGBTE issues by religion.”

Viale called the protests “hypocritical” and a symptom of the “same intolerance of fundamentalists who rallied against the cartoons of Mohammed and Islam.”

The critics, he said, have not considered “that the symbolic allegory is not about God, not against God, but against the earthly ecclesiastical interpretation, with explicit reference to the homophobia of Putin’s Russia.” He also accused the critics of “fat shaming” the nude woman in the photo, “as if it were a sin to be heavier.”

The decision was supported by an independent Turin city councillor, Giuseppe Sbriglio, who said, “I do not like this picture, I have to defend the rights but I find it offensive.”

“The challenge is to raise consciousness,” Sbriglio said, “but this disturbs my soul. Jesus helps us to crush the head of the devil. Man or woman cannot crush the head of Jesus. My thesis is that this is about the protection of religious feeling, but this in my opinion vilifies it, and therefore doesn’t this also vilify the City that gives [the exhibition] sponsorship?”

Maurizio Marrone, leader of the Fratelli d’Italia, a conservative political party, issued a statement condemning the display, saying, “I do not think the gay lobby enjoys a license to offend the sensibilities of others, especially those of Christians in a time of fierce and bloody persecution for the faith in those sacred images so outraged by the so-called LGBT art.”

The Fratelli, he said, “demand the immediate withdrawal of municipal patronage from this filth and the mayor’s public apology for this unforgivable slip.”

Maurizio Braccialarghe, city councilor for culture, issued a statement saying that before giving patronage to any such initiative, the committee “evaluates the seriousness of the projects presented” and in the case of the LGBTE exhibition, the councilors were shown nothing that they would have considered “detrimental to the sensitivity of many.”

“After seeing the poster,” Braccialarghe said, “today the council unanimously decided to withdraw the sponsorship of the event.”

Photographer Mauro Pinotti, who took the photo in question, denied that the intention was to “trample on religion.” “It has as one aim: to highlight the woman,” he said. The exhibition has the theme “Saligia,” a Latin acronym for the seven deadly sins: superbia, avaritia, luxuria, invidia, gula, ira, acedia.

“The symbolism that I have chosen for my work is not intended to denigrate religion, but only enhance the superiority of women relative to men. The seven deadly sins presented in the exhibition have all of the well-defined symbols, studied in detail. In this photo I have chosen to symbolize Pride with a woman,” Pinotti told La Repubblica.