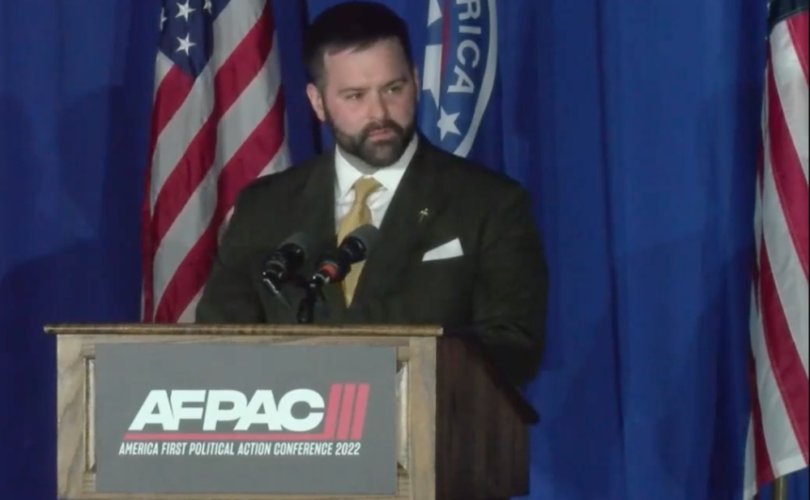 Editor’s note: The speech by Gab CEO Andrew Torba was given at the America First Political Action Conference in February 2022. Coverage of this speech does not imply that LifeSiteNews endorses the views of everyone involved in the conference.

ORLANDO, Florida (LifeSiteNews) — In an era of increasing censorship and control by secular leftist corporations, at least one social media platform is dedicated to defending freedom of speech and aligning itself with Judeo-Christian values. And its CEO is urging others to get on board.

In a compelling speech last weekend, Andrew Torba, founder and CEO of the free speech social media site Gab, called upon conservatives to step up and build explicitly Christian alternatives to the materialistic and “demonic” companies and services which promote immorality, control the flow of information, shun conservative voices, and seek to decimate traditional values and culture.

“The people in power want a Great Reset, but what we are going to give them instead is a Great Restoration,” he said, arguing that conservatives must restore and defend the foundational Christian values of the United States by building a “parallel economy.”

According to Torba, such a network of parallel systems to compete with Big Tech oligarchs and secular corporations “can only work if they are built on the firm foundation of our faith in Jesus Christ and the Truth of God’s Word.”

Gab’s founder told the audience he launched his popular free speech social media alternative site six years ago after seeing Americans who rejected the narratives and ideals of the modernist “regime” being silenced, “banned from the internet, frozen by banks, blacklisted from flying on airplanes, and labeled terrorists for daring to have a political opinion that dissents from the ruling Regime’s. “

“By refusing to bend to the demands of the Regime I myself became a dissenter,” continued Torba, who used to work in Silicon Valley, noting that he and his family have faced repeated threats and harassment for bucking the prevailing culture.

For Torba, fighting back against personal and corporate attacks just comes with the territory, since free speech, liberty, and Christian values are worth sacrificing for.

“This is the cross I will gladly pick up and carry if it means that my children will grow up in a world where they can speak freely and worship God Almighty,” Torba said.