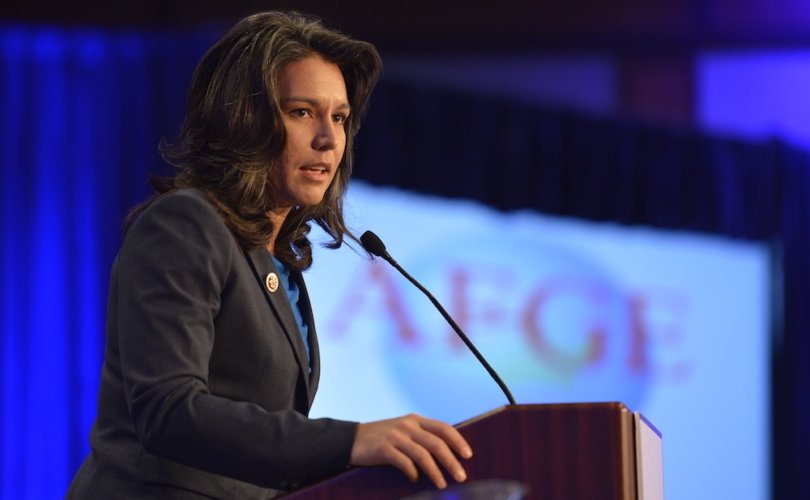 September 10, 2019 (LifeSiteNews) – Rep. Tulsi Gabbard of Hawaii, one of the numerous Democrats currently running for the party’s 2020 presidential nomination, dissented slightly from the pro-abortion consensus over the weekend by expressing support for banning at least some abortions in the third trimester.

Gabbard sat down with libertarian commentator Dave Rubin for a wide-ranging interview released Sunday, during which he brought up the subject of abortion. She described her overall stance as a “more libertarian” belief in government’s role, that “government really shouldn’t be in that place of dictating to a woman the choice that she should make.”

“I think that there should be some restrictions, though,” she added. When Rubin (who describes himself as “pro-choice” but growing more ambivalent on the issue) asked for a “cutoff point for that,” she answered, “I think the third trimester, unless a woman’s life or severe health consequences is at risk, then there shouldn’t be an abortion in the third trimester.”

Gabbard’s answer leaves significant wiggle room as to whether she would support a meaningful late-term abortion ban, given how current Supreme Court precedent defines how “health” is to be understood in the context of abortion.

“(M)edical judgment may be exercised in the light of all factors – physical, emotional, psychological, familial, and the woman’s age – relevant to the well being of the patient. All these factors may relate to health,” the Court declared in Doe v. Bolton, the companion ruling to Roe v. Wade. “This allows the attending physician the room he needs to make his best medical judgment.”

By contrast, pro-life laws such as the federal late-term abortion ban generally make exceptions for medical emergencies, but use more precise language such as a risk of “substantial and irreversible physical impairment of a major bodily function, not including psychological or emotional conditions, of the pregnant woman” (Gabbard previously voted against the ban).

Even so, Gabbard’s answer stands out amid the rest of the Democrat field, all of whom are running on a platform of effectively unlimited abortion at tapxayer expense, and several of whom have announced plans to enshrine and expand Roe in federal law, effectively banning states from passing any significant pro-life laws.

Every contender currently in the U.S. Senate has voted against the Born-Alive Abortion Survivors Protection Act, which would require abortionists to transfer infants who survive abortions to hospitals for basic medical care. Sens. Bernie Sanders and Kamala Harris have refused to say if abortion is ever wrong, and most recently former Texas Rep. Beto O’Rourke defended abortion up to the day before birth.

Gabbard has drawn some interest for ostensibly being more moderate than the rest of the Democrat field. As recently as 2004, she opposed same-sex “marriage,” but has since disavowed her old stance and is now largely in lockstep with the 2019 party, having established a 100 percent pro-abortion voting record, backing a variety of pro-LGBT bills, and even endorsing the decriminalization of prostitution.

National Review noted that Gabbard has not signed on as a co-sponsor of Democrat legislation to repeal the Hyde Amendment, which bas direct federal funding of most abortions, or the so-called Women’s Health Protection Act, which would explicitly forbid states from enacting a broad range of even modest abortion restrictions.

Yet Catholic News Agency pointed out that Gabbard has also failed to sign a discharge petition that would force a House vote on the Born-Alive Abortion Survivors Protection Act.

Gabbard is currently in ninth place among the Democrat primary field, according to RealClearPolitics, with a polling average of 1.7 percent.