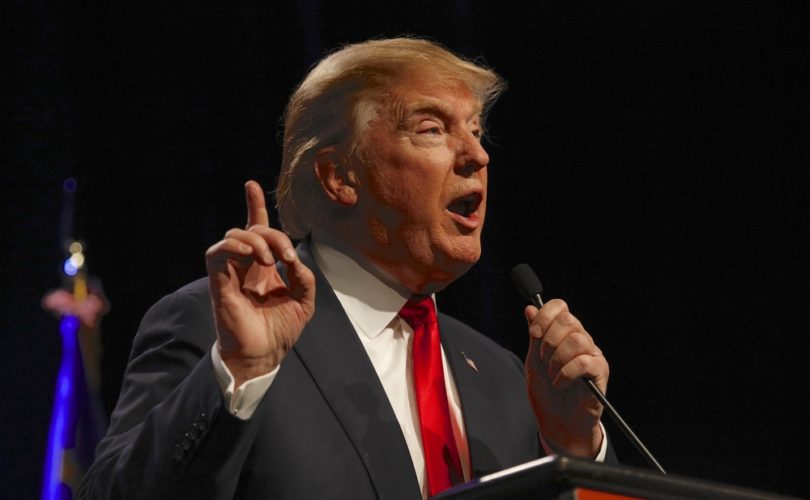 ASTON, Pennsylvania, September 15, 2016 (LifeSiteNews) – Donald Trump has unveiled a major policy proposal that would give a tax break to stay-at-home mothers with young children, a policy sought by some pro-family advocates for decades.

He would allow most families to deduct the cost of childcare from their taxable income – whether the child goes to a daycare facility or is cared for in the home by a parent.

An “above-the-line” tax deduction, which reduces the total amount of income (Adjusted Gross Income, or AGI) subject to federal tax, is already established for college tuition and health care premiums in some cases.

The plan would give low-income households another tax credit worth as much as $1,200 a year by expanding the Earned Income Tax Credit and refunding up to half the payroll taxes of the lower earning parent.

Speaking in the Philadelphia suburb of Aston, Mr. Trump said the policy would apply to parents of children of one to four children, from birth to age 13.

The policy was lauded by pro-life, pro-family politicians and organizations. Rep. Marsha Blackburn, who chairs the House Select Panel on Infant Lives and introduced Mr. Trump on stage Tuesday night, said the tax plan would “ensure women do not have to choose between work and family as well as ensuring that if a parent does decide to stay home to care for their children, they are not unduly penalized by the federal tax code.” Congresswoman Vicki Hartzler of Missouri, a pro-family champion, said, “Not only does Mr. Trump’s plan help working parents, but it also gives benefits for parents who chose to stay-at-home with their children.” Rep. Diane Black called the plan “both pro-growth and pro-family.” And Rep. Cynthia Lummis of Wyoming said his “thoughtful proposal shows a Trump administration will be a pro-family administration.”

Tony Perkins, president of the Family Research Center, added that “Trump's plan recognizes the importance of the family in society and the importance of children to future economic growth. His plan encourages family formation which will, over time, help boost the economy.”

Trump vs. Clinton: Parenting vs. Preschool

Mr. Trump’s plan differs significantly from that of Hillary Clinton, who has long said she subscribes to the philosophy that “it takes a village to raise a child.”

Hillary Clinton’s website promises to “make preschool universal for every 4-year-old in America” by “significantly increasing the federal government’s investment in child care subsidies.” Researchers at the University of California at Berkeley and Stanford University studied 14,000 students and discovered that preschool is correlated with arrested emotional development. Multiple other studies have found that, while educational gains fade out, character traits such as increased aggression linger.

Clinton offers no incentives for stay-at-home parents, something critics view as an intentional sleight. “The Democrats, under the influence of the feminist bloc, don’t want to give any recognition to stay at home parenting, because they fear – rightly so – that women may like it,” Dr. Allan C. Carlson of the  Howard Center for Family, Religion, and Society told LifeSiteNews in 2012.

Controversy has stirred in some quarters, since the Trump plan would include same-sex couples, “if the marriage is recognized under state law,” as mandated by the Supreme Court’s Obergefell decision.

“We applaud Donald Trump for wishing to make families stronger, but not with the help of social engineering,” said David Lane, the founder of the American Renewal Project, which recently hosted a meeting of Donald Trump and more than 1,000 pastors in Florida. “Evangelicals are not going to support a policy that has anything less than a mommy and daddy in the home.”

Mr. Trump also promised six weeks of federally funded, paid maternity leave for women whose employer does not offer it. Secretary Clinton would require employers to offer 12 weeks of paid leave for either parent.

Although the Trump campaign promised to roll out details of how he would pay for this in a speech today, some Republicans oppose mandatory maternity leave in any form.

“Ivanka [Trump] says her father's plan won't raise taxes. Maybe not, but mandating employers do something…will have ramifications,” writes commentator Ashe Schow at The Washington Examiner. “A lot of businesses, especially those that pay low-skilled workers, can't afford it. Under a regimen of paid leave, they will simply think twice before hiring people who arguably need jobs the most — young married people (and especially young women) who might have children.”

All the ways Trump's maternity leave plan is ridiculous and would actually hurt women & families. https://t.co/jV2KNKOaGY

That inspired a number of outraged reactions. “Why do you care?” asked Jeff Dunetz, who goes by the Twitter handle @yidwithlid. “You want the babies ripped out of their moms so you can sell their parts.”