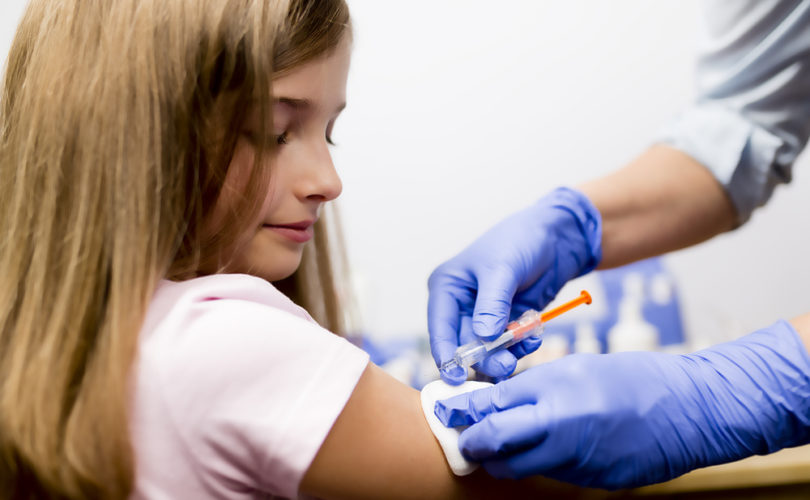 TORONTO, February 13, 2015 (LifeSiteNews.com) — Since its introduction in 2007 in the U.S. and Canada, the Gardasil vaccine against Human Papilloma Virus (HPV), the main cause of cervical cancer and genital warts, has been injected in more than 50 million people in more than 130 countries, mostly young women.

But concern over serious side effects and deaths following inoculations has grown enough for the Toronto Star to mount a lengthy investigation. It found more than 50 Canadian girls who developed serious medical conditions after their injections with Merck’s Gardasil (15 hospitalized) and in the U.S, more than 100 deaths and tens of thousands of reports of adverse effects.

While the Canadian government spent $300 million to promote anti-HPV inoculation and provincial governments paid for Grade 8 girls to get it, Catholic school systems and Catholic bishops opposed it, led by Calgary’s Fred Henry. They cited not only the side effects but also their concern that giving a vaccine against a sexually transmitted disease to Grade 8 girls would send a message of tacit approval of premature sexual behavior.

The Star found plenty of parents who believe the vaccine caused their daughters’ illnesses and, on the contrary, a consensus of public health officials and medical professionals who dismiss all such claims. For example, they quote Dr. Jennifer Blake, president of the Society of Obstetricians and Gynaecologists of Canada, saying, “I’m extremely comfortable that this is a safe vaccine.”

That coincidence translated into pressure from school authorities on parents and their daughters, who claim the risks of side-effects were ignored or discounted.  One Ontario girl, Kaitlyn Armstrong, said her guidance counselor “told us it was going to protect us from cervical cancer, it’s a really good idea to get it. She was pushing it. She didn’t talk about any complications or any of that stuff.” The Star chronicles her gradual loss of strength and abandonment of all physical activities.

Merck devotes several pages of its technical report on Gardasil to its side effects, the Star reported, but other parents and young women claim they never heard about them (Merck says its own research found only five serious cases out of 11,000 vaccinations during testing.). Armstrong remembers telling the nurse who injected her she had an allergy to metal but, even though aluminum salts are an ingredient of Gardasil, she was given the vaccine.

Debbi Vinnedge, founder of Children of God for Life, a watchdog organization focused on vaccines and research using human fetal tissue, told LifeSiteNews, “Gardasil does not contain aborted fetal tissue but its side effects, its side effects are very, very serious.” But even though it lies outside its area of concern, COG for Life received so many questions and complaints from parents, the organization produced a pamphlet listing concerns and research on side effects.

Among a “partial list” of 16 adverse effects the pamphlet lists are miscarriage, stillbirth, ovarian cysts, genital warts, multiple sclerosis, lupus, paralysis, and stroke. One overarching explanation is that, for many, Gardasil may weaken the immune system. How many? The pamphlet claims more than 28,000 reports of such negative effects were made to the U.S. government’s Vaccine Adverse Event Reporting System by 2012, as had 128 deaths—all within the population of girls aged 9 – 24.

Vinnedge said one problem with Gardasil is that it was tested for five years but “the HPV virus can lie dormant for 20 years.” She questions whether its effectiveness against the virus is properly proven over the long term. A second problem: “It gives people a false sense of security,” encouraging teenage girls to take sexual risks, when “it only works against four out of 100 different forms of HPV.”

Sanevax is another organization devoted to reporting on safe and unsafe vaccines. Its website is crammed with ominous research into Gardasil and first-hand horror stories and recent news. Among the latter: a report from Colombia of hundreds of school girls hospitalized after vaccination with Gardasil, and from the U.S. a surge in fatality reports related to recent vaccinations with Gardasil and another problematic HPV vaccine, Cervarix.

Gardasil’s defenders note that new vaccines often are followed by claims of adverse impacts, but these are not the same as proof. In a Forbes Magazine article in 2012, health reporter Matthew Herper took on those 28,000 reports to VAERS. “It’s true that there have been 24,000 reports of adverse events with Gardasil. (All of these numbers come from the VAERS database…) There have also been 60,000 reports of death with the mumps, measles, and rubella vaccine, and 26,000 following vaccination with Pfizer’s Prevnar, for pneumococcus bacteria.”

Teenagers die, Herper explains, and some die after getting their HPV shots. But the people tasked with analyzing VAERS data ruled out almost all of the adverse reports alleged against Gardasil after investigating the first 12,000.  They advised doctors and nurses to be on the lookout for girls fainting after their shots.

But Norma Erickson, the president of Sanevax, questions that analysis. “I know some survivors of those first 12,000 reports and none of them has ever spoken to any investigators.” Erickson told LifeSiteNews, “we know those reports are anecdotal but that is where scientific investigations start.” She cited the case of Thalidomide, an anti-nausea drug that came under investigation in the late 1950s only after anecdotal reports linking it to newborn babies with deformities.

Erickson suggested two Gardasil ingredients may be causing the problems: the aluminium, which is a neurotoxin, and L-hystidine, an amino acid that interferes with the brain’s defences against metal toxins. “Whichever part of the brain is affected by the toxin,” said Erickson, “that may lead to a different problem.” Erickson admitted that nobody knows why Gardasil would cause the wide range of adverse effects. “That’s why we are asking for a full investigation.”