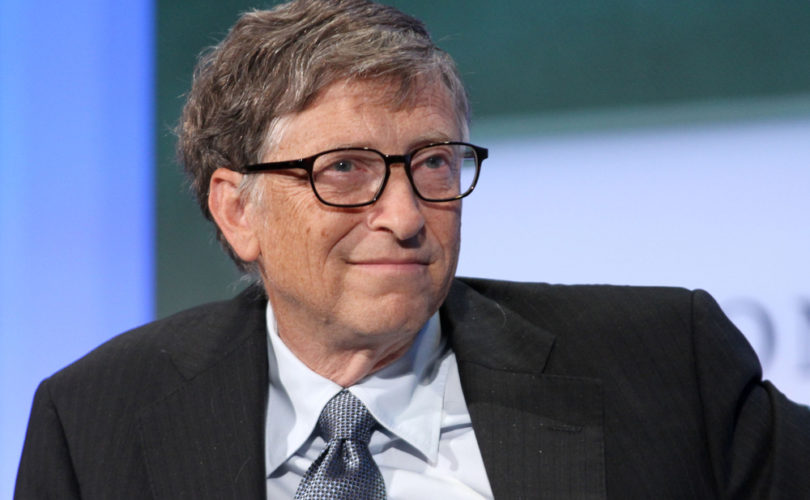 Updated at 2:16 p.m. EST to include comments from Fr. Shenan Boquet and information from Wired magazine.

LEXINGTON, MA – The Bill and Melinda Gates Foundation is funding the development of a contraceptive microchip that can be remotely controlled to release hormones that can act as abortifacients into a woman's body for up to 16 years. Both the chip's potential to take a life and the potential privacy concerns have drawn criticism.

The chip, which measures 20 x 20 x 7 millimeters, can be implanted under the skin of a woman's buttocks, upper arm, or abdomen in 30 minutes. The device contains a 16-year reservoir of the drug levonorgestrel, releasing 30 micrograms a day – but the dosage can be altered by remote control, as well.

The technology was originally intended, and tested, to release osteoporosis medication in elderly women, but Dr. Robert Langer of MIT changed his focus to contraception after a personal discussion with Bill Gates. Gavin Corley, a biomedical engineer, told the BBC the technology could be used to achieve contraceptive targets in the developing world, indicating “a humanitarian application as opposed to satisfying a first-world need.”

The announcement comes as the Gates Foundation is spearheading an international, multi-billion-dollar push for expanding birth control in the developing world, bringing charges from pro-life and political that they are engaged in global population control. In June, Melinda Gates wrote that the foundation “has decided not to fund abortion” as part of its efforts.

But numerous studies have indicated that levonorgestrel, the hormone used both by this chip and the morning after pill, has a strong anti-implantation effect, meaning it acts in part by preventing a newly-conceived embryo from implanting in the uterus. One study found the hormone only has an “effectiveness rate” of 49 percent when blocking ovulation alone.

“Administration of dangerous hormonal contraceptive drugs, whether through new technologies or traditional oral methods, should not be considered a boon for women’s health, as the serious risks of these drugs are better known every day,” Fr. Shenan Boquet, president of Human Life International, told LifeSiteNews.com.

“Our concerns are only heightened when we see reporters promoting this effort of the Bill and Melinda Gates Foundation without mention of the harm done to women by other versions of these drugs, as if this only promises good health and empowerment for women,” he added.

This isn’t reporting; it’s propaganda, and it is especially dangerous given the risks involved.”

Then again, a remote-controlled computer chip that potentially leaves the patient's health at the mercy of anyone with sufficient computer skills presents its own issues.

Dr. Robert Farra of MIT said the subcutaneous computer chip must be given “secure encryption” so that “someone across the room cannot re-program your implant.” To date, that security has not been developed.

Civil libertarians worry about how hackers – and rogue government agencies – could exploit that technology. “Whatever that chip transmits will go into a government file,” John Whitehead, a constitutional attorney and founder of The Rutherford Institute, told LifeSiteNews. “The chip may actually know when you're having sex. So, there will be no privacy, no.”

One source of privacy violation is hackers. In April, Wired magazine reported on a two-year effort led by Scott Erven that successfully hacked hospitals' drug-infusion pumps, allowing them to alter the amount of morphine administered to patients; accessed defibrilators, creating unnecessary shocks or preventing life-saving shocks to restart a patient's heart; refrigeration units that house blood, changing the temperature and potentially allowing the blood supply to spoil; viewed X-rays; and had the ability to change patients' online medical records.

Another is government. Whitehead extensively researched the extent of government surveillance for his new book, A Government of Wolves: The Emerging American Police State.

“Here's what I've learned about government – whatever technology we have, theirs is much greater,” he said, noting the potential for abuse leads to inherent privacy issues and violations of the Fourth Amendment. “The FBI is collecting a huge DNA database now,” he told LifeSiteNews. The Supreme Court upheld widespread DNA collection in its 2013 Maryland v. King decision.

“I'm afraid the chip could be activated in some harmful way,” such as a future eugenics program, Whitehead said. “It could basically bar certain people from having children.”

Instead of protecting citizens' liberties, “Congress has given us no guidelines” about invasive forms of technology, he said. He believes that is because Congress is “funded by the same groups that are providing the technology.”

Pre-clinical testing of the new microchip begins next year. Langer's development team at MicroCHIPS Inc., based in Lexington, Massachusetts, hopes to introduce the product by 2018, pending approval by the Food and Drug Administration (FDA).

“People can voluntarily do it,” Whitehead said, “but they need to know what the dangers are.”

“The Gates Foundation and its partners are likely to continue this assault on women’s health until a sustained world-wide backlash ensues,” Fr. Boquet said.