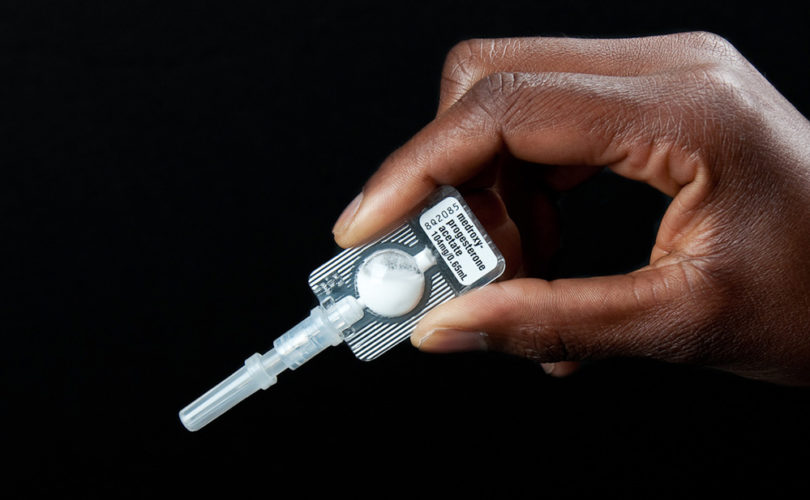 The Bill and Melinda Gates Foundation and the Big Pharma company Pfizer Inc. are teaming up to offer a contraceptive drug called Sayana Press, a watered-down version of Pfizer’s Depo Provera, at $1 a jab, which will usually prevent pregnancy if taken faithfully in three-month intervals.

As the web page for a Sayana Press pilot project reports, the contraceptive is “small, light, easy to use, and requires minimal training, making it especially suitable for community-based distribution—and potentially for women to administer themselves through self-injection,” thus saving them sometimes lengthy and arduous journeys for their injections of Depo Provera or other contraceptives by doctors.

Contraception of any kind, assures the same page, saves the lives of women who would otherwise be lost to botched abortions and live births. “Healthier mothers,” it continues, “mean healthier children and improved child survival.”

Already piloted in Burkina Faso, Uganda, Senegal, and Niger, Sayana Press’ disposable syringes will now be distributed in 69 countries, with the drug from Pfizer, money from the Gates Foundation, and distribution from the U.S. Agency for International Development, UNFPA, PATH and the Children’s Investment Fund Foundation.

But there’s a problem with that, says Stephen Phelan, director of mission communications for Human Life International. Quite apart from the fact that Sayana Press can function as an abortifacient, it is dangerous for women, something that Pfizer, the Gates Foundation, USAID, and the other groups are loath to admit.

Phelan told LifeSiteNews, “I’ve interviewed dozens of women in Uganda and Tanzania who have used Depo Provera. Most of them had never been told of the side effects of Depo Provera, nor were they asked about their medical history. I even met with a group of 263 women in Uganda who were suffering from symptoms associated with Depo Provera and Norplant (another long acting contraceptive) and only eight said they had been warned of potential serious side effects.” Knowing if a woman has heart problems is particularly important, since Depo Provera has been associated with blood clots.

Phelan said that the Gates may intend to improve developing world living conditions by reducing the population, “but they are doing so in a very dangerous way for women.” Depo Provera and Sayana Press “are not good for women’s health and are harmful at the social level,” he said.

Not only has Depo Provera been shown in peer-reviewed research to increase the chances of women contracting HIV-AIDS, says Phelan, “it causes prolonged bleeding in many women, which in turn causes anaemia; Depo also can cause loss of libido and sustained loss of energy.” These factors lead women to turn away sexual relations with their husbands.

“A shocking number of women we spoke to reported that their husbands beat them up and threw them out of the house for refusing to have sex and for not having the energy to work,” said Phelan. “Remember, this is Africa, not Scottsdale. In Scottsdale, women have a relationship with a doctor, and they must be told of the side effects of these drugs, which is why American women do not choose them. And they have access to media and attorneys if their health is adversely affected” by the drugs. Phelan says that many of the women he spoke with reported that without being able to work, and having family problems, “they become pariahs in the village.”

The “Family Planning 2020” campaign, led by the Gates Foundation and the British government, fits the bill of indictment offered up by humanist and rocket propulsion designer Robert Zubrin in his broad-reaching book, Prophets of Despair, where he charges USAID, WHO, Planned Parenthood International and blundering do-gooders such as the Gates with inflicting racist, coercive, and dangerous sterilization programs on the developing countries.

Brian Clowes, research director with Human Life International, adds that the billions the Gates Foundation and their partners are spending on the development and promotion of contraception could be better spent on economic development.  Children are seen as a form of social security in developing countries, he explained to One News Now earlier this year. Contraception will reduce the population but leave the people in poverty. “So if all of this money were put into real economic development, like rural electrification, better roads and better schools, the men and the women there will naturally have fewer children. You’re going to wind up with a smaller population, which is what they want in the first place.”