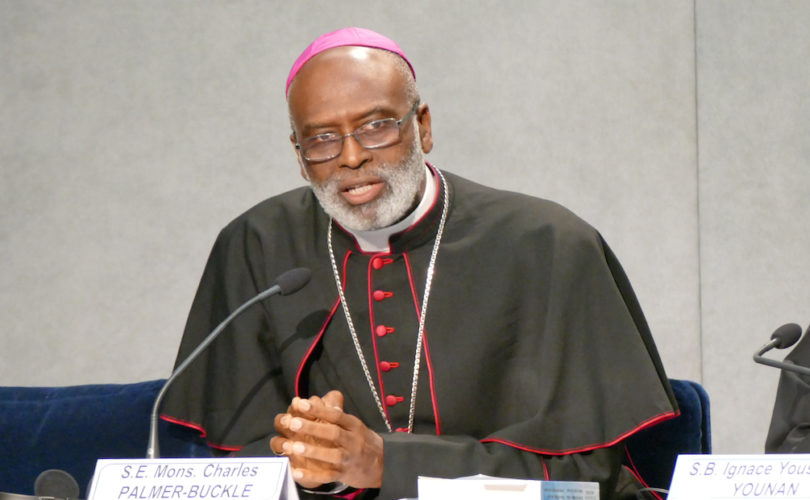 ROME, October 8, 2015 (LifeSiteNews) — At the Vatican’s press briefing Thursday, the head of a U.S. group that aims to change Church teaching on homosexuality challenged an African bishop for perceived silence on the criminalization of “gay and lesbian people.”

Francis DeBernardo, executive director of New Ways Ministry, was questioning Archbishop Charles Palmer-Buckle from the diocese of Accra in Ghana. DeBernardo identified himself as representing “Bondings,” which is the name of his blog.

New Ways Ministry has been formally condemned by both the Vatican and the United States Conference of Catholic Bishops for opposing Church teaching, and is repeatedly banned from speaking in Catholic dioceses. Most recently they were denied use of a Philadelphia parish to host an event opposing Church teaching during the World Meeting of Families.

He then asked: “Do you think the African bishops or indeed any bishops would support a statement from the Synod condemning the criminalization of lesbian and gay people?”

Catholic leaders have supported the principle of formal government condemnation of homosexual acts, just as with other sexual deviations that gravely damage the social fabric. In 2003 Cardinal Ratzinger, for example, spoke of the need for “reminding the government of the need to contain the phenomenon [of homosexual unions] within certain limits so as to safeguard public morality.”

In response to DeBernardo’s question, Palmer-Buckle cited the Holy Father’s famous remark on the flight home from World Youth Day in 2013 – “Who am I to condemn if a gay is looking for Christ?” he quoted the pope as saying – and said it had “huge repercussions” in Ghana.

He said the bishops had issued a communiqué agreeing with the pope “that people who are different from us are sons and daughters of God, and we have to welcome them, be able to open the doors of the Church to them.”

“Yes they are human, they have human rights, and their human rights and dignity should be respected and upheld,” he said.

He indicated that the bishops are working to change deeply held African opinions on homosexuality. “We are doing what we can. It takes time for voices, individual voices like that to be heard, when you are dealing especially with something that is culturally difficult for people to understand,” he said. “They have lived with it for millennia. Attitudes in Africa towards people who are different has been something that has been there for so long. I would like to say that it would be a bit deceptive to think overnight individuals would change their opinion, overnight documents will be written in favour, and the rest of it.”

“There was unfortunately a government here in Europe, Britain I think, that tried to tell us that if we do not accept this, gay marriages and the rest, they were not going to give us the financial help,” he said. “We thought that was a gross violation of what we call the sovereignty of countries. We would have loved others to respect our sovereignty.”

“Give the countries time to deal with the issues from their own cultural perspective,” he said. “And I’d like you to know that we must underline that the rights of all sons and daughters of God are to be upheld by the Church everywhere. I don’t want to say that we have reached it – no, no, no, perfection is not something that we have attained. But we are working towards that.”

“Be patient with Africa. We’re growing,” he added.

The condemnation of New Ways Ministry

New Ways Ministry was founded in 1977 by Sister Jeannine Gramick, SSND, and Father Robert Nugent, SDS in the Archdiocese of Washington.

After numerous unsuccessful requests to clarify their position on the Church’s teaching, Washington Cardinal James Hickey decided in 1984 that they were no longer permitted to be active in the archdiocese.

After numerous complaints from bishops and others, the Vatican launched an investigation of New Ways Ministry in 1988, and after repeated formal requests that the founders reject their statements against Church teaching, in 1999 Cardinal Joseph Ratzinger, as prefect of the Congregation for the Doctrine of the Faith, issued a notification informing the faithful that they had found the organization’s statements “erroneous and dangerous.”

The position advanced by the founders, he wrote, “are doctrinally unacceptable because they do not faithfully convey the clear and constant teaching of the Catholic Church in this area.”

Noting that the organization claims to promote “respect” and “compassion” for homosexual persons, Cardinal Ratzinger wrote that “the promotion of errors and ambiguities is not consistent with a Christian attitude of true respect and compassion: persons who are struggling with homosexuality no less than any others have the right to receive the authentic teaching of the Church from those who minister to them.”

“The ambiguities and errors of the approach of Father Nugent and Sister Gramick have caused confusion among the Catholic people and have harmed the community of the Church,” he wrote.

In 2010, the late Cardinal Francis George, then-president of the United States Conference of Catholic Bishops and archbishop of Chicago, issued his own condemnation of New Ways Ministry.

“I wish to make it clear that, like other groups that claim to be Catholic but deny central aspects of Church teaching, New Ways Ministry has no approval or recognition from the Catholic Church and that they cannot speak on behalf of the Catholic faithful in the United States,” he wrote. “Their claim to be Catholic only confuses the faithful regarding the authentic teaching and ministry of the Church with respect to persons with a homosexual inclination.”