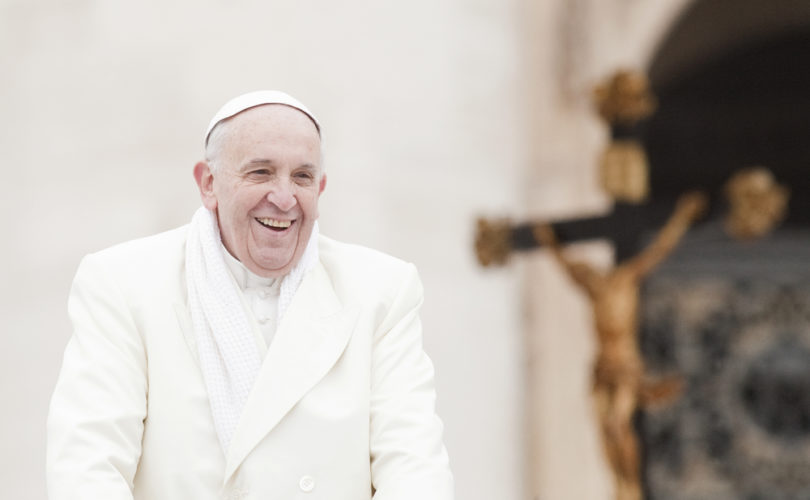 July 31, 2015 (LifeSiteNews) – A group of LGBT activist organizations and individuals has written to Pope Francis asking for a meeting with him during his September U.S. visit in the hope they would be able to obtain “full acceptance” in the Catholic Church.

The letter, dated June 25 and published in a July 28 New York Times report, appeals to the pope’s famed non-judgmental style.

“Many LGBT people and family members have experienced a resurgence of hope for full acceptance in our Church as a result of your words and reports of personal meetings with LGBT people,” they write to the pope. “We see your visit to the U.S. as an opportunity for you to hear from us how central our faith is to our lives, and to work together towards creating a Church where all families know that we are truly loved and welcomed.”

The coalition behind the letter says Catholic Church teaching on sexual morality is the source of a vast “pastoral crisis.”

In addition to alienation from the Church, the group lays a host of other social ills found in the LGBT demographic at the feet of the Catholic Church, including poverty and violence, discrimination in employment, housing, education, and also trouble accessing healthcare.

The groups behind the letter are a compilation of pro-homosexual, pro-abortion and otherwise dissenting organizations and individuals, including DignityUSA, GLAAD, Human Rights Campaign, Roman Catholic Womanpriests USA and Catholics for Choice. Latino groups on the letter include Familia es Familia, Latino GLBT History Project and the National Council of La Raza. Individuals from Call to Action, Fortunate Families and New Ways Ministry are signed on, among others.

It’s not the first time Catholics opposed to Church teaching on homosexuality have personally appealed to Pope Francis.

Disgruntled Catholics opposed to San Francisco Archbishop Salvatore Cordileone’s efforts to reinforce Catholic identity in archdiocesan high schools wrote an open letter to the pope calling for the archbishop’s removal, and the homosexual partner of a woman fired from a Philadelphia-area Catholic school has written to Pope Francis asking for a meeting as well.

Misinterpretation has been front and center throughout the media since Pope Francis’s 2013 comments on a clergyman allegedly involved in a homosexual affair were greatly distorted.

The infamous “Who am I to Judge?” remark picked out from the interview and presented out of context has led to substantial presumption of the Holy Father’s view of homosexuality, and misconception of his ability to change Church teaching in the area.

While some have been confused by a number of Pope Francis’ statements, the Holy Father has repeatedly criticized the homosexual agenda and gender ideology, and promoted the natural family.

Even so, the confusion has continued and fueled speculation that the Pontiff’s visit to Philadelphia for the World Meeting of Families, an international triennial Catholic celebration of the family, could somehow greenlight a change in Catholic doctrine regarding homosexuality, homosexual “marriage” and related issues.

“With gay Catholics clamoring to be heard, and the pope expected to address a crowd of more than one million in Philadelphia to close a landmark Catholic event on family life called the World Meeting of Families,” the New York Times piece said, “the stage for a reckoning is set.”

“We see so many people we love abandoning the church because of the kinds of indignities and pain that they’re subjected to, whether it’s being denied a kid’s baptism or hearing a priest make horrible comments during a homily,” stated Marianne Duddy-Burke, executive director of DignityUSA. “Everybody’s got stories of pain and alienation, and those things do real harm to people. And it needs to end.”

The letter to the pope cites statistics that show a majority of Catholics support allowing homosexual couples to legally “marry.”

“At times, these Catholic families feel unwelcome in our Church, as they fear or experience condemnation of themselves or their loved ones. This is something that pains us all. All of these concerns are important to us as Catholics, and we know they are important to you,” it says to Pope Francis.

Pope Francis “has the opportunity to change that narrative, and to bring people and the church along with him,” said Sarah Kate Ellis, president and chief executive for GLAAD.

The Church draws a distinction between homosexual inclinations and acts, and it says homosexual persons, like everyone, are called to be chaste.